Cayenne and Macan owners in the San Diego Region hit the trails on January 25 for a fun and challenging drive in the Anza Borrego Desert State Park. Like most of the off-road adventures the San Diego Region puts on, the plan was to experience three or so hours of off-roading on trails that would not only challenge the vehicles, but provide their drivers some direct experience and help them learn to navigate challenging terrain. 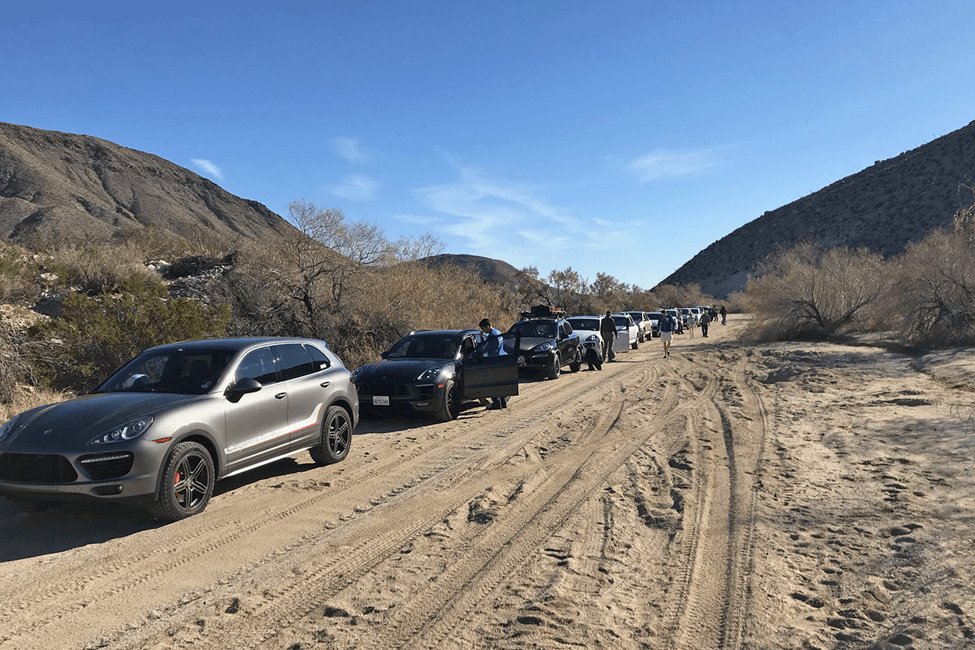 The turnout for this event was great with 10 Cayennes that represented all three generations, with models ranging from base models to Turbos, GTSs, and Diesels. Rounding out the group were two intrepid Macans, a shiny black GTS and a white S model. The new third-generation Cayenne joining our group was a Turbo that was well prepared for the drive, wearing some meaty all-terrain tires and completely wrapped in vinyl to prevent scratches. Part of the fun of these events is witnessing the different capabilities of these vehicles, and this trail was sure to put them to the test. 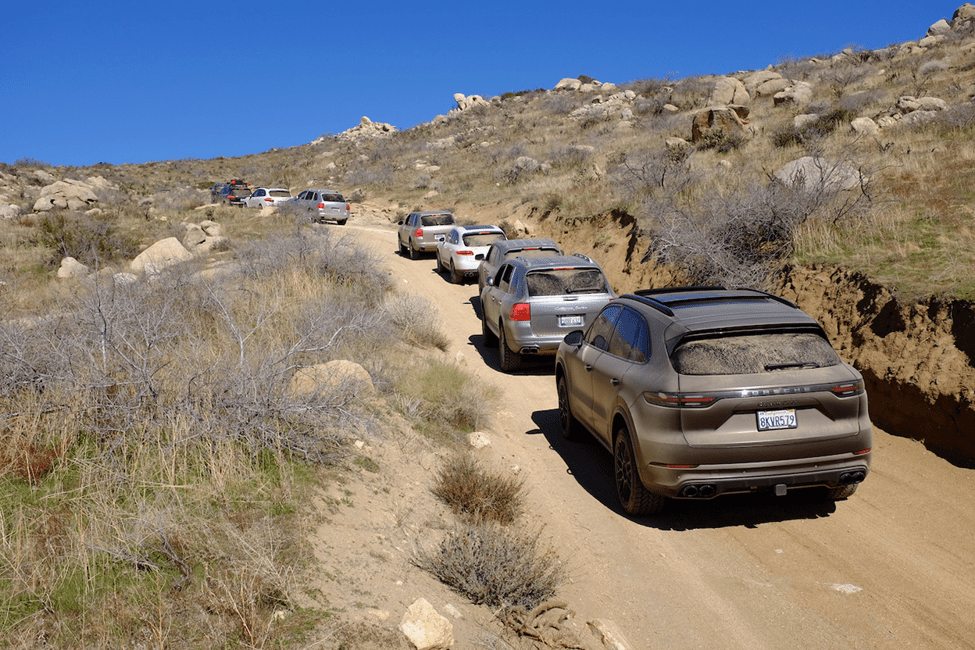 Above: A new Cayenne Turbo follows earlier models up a trail.

The trail started out with a gentle sand wash with some mild bumps and dips for the first mile or so, which got people used to the feel of driving off the pavement. The steering isn’t as precise, braking is less effective, and things are quite noisy due to the bumps and rocks being flung into the wheel wells. There were a couple stretches of the single- to double-width trail where the ground smoothed out and speeds close to 40 miles per hour could be attained. Those new to off-roading in the first generation Cayennes experienced how 35-40 mph with low-range gearing engaged requires much higher engine speeds than when using the regular gear range. After our initial jaunt on relatively flat sand and dirt, the trail turned up a challenging uphill rocky stretch. 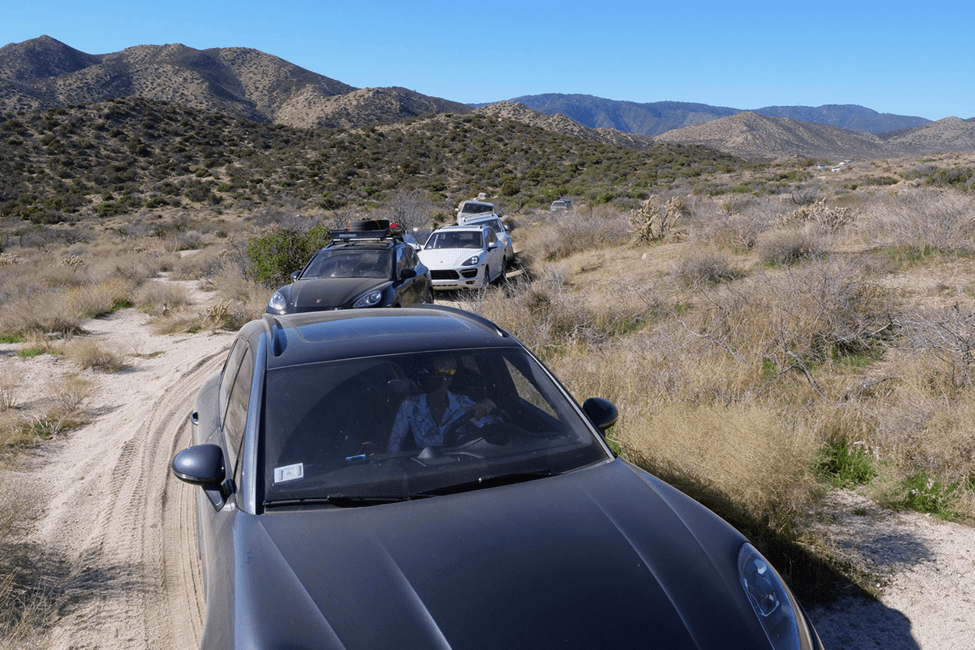 This part of the trail presented drivers with ride height and traction challenges due to the deep dips and ruts of the slippery rocky surface. It was an enjoyable experience to see the varying capabilities of the Porsches. Those with more ground clearance and better traction made rather easy progress up the steep hill — large off-road tires and/or height-adjustable air suspension were assets in this terrain. On the other hand, the Porsche Traction Management (PTM) system would engage constantly if standard-size all-season rubber was equipped, braking spinning wheels to direct torque to where there was traction. 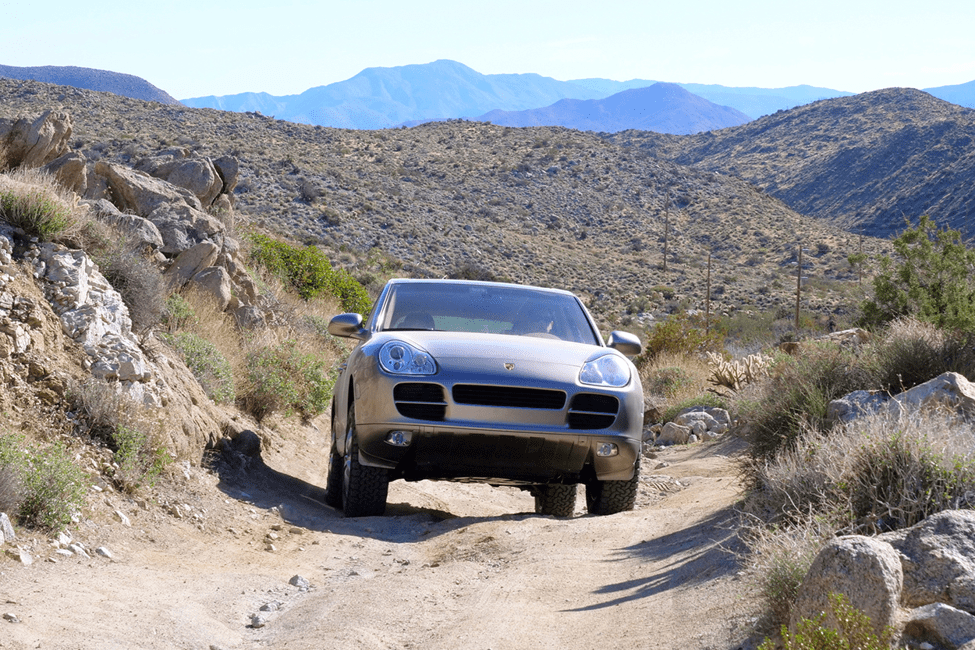 Above: A first-generation Cayenne climbing a bumpy hill.

It also turns out that any Cayenne is a more capable off-roader out of the box than the smaller Macan. With their center differentials locked, all of the Cayennes, including ones running all-seasons, made it up the rocky stretch with little drama and no significant tire slippage, while the two Macans required some trail engineering to make it up the hill. PTM is an effective tool, but this part of the trail exceeded its limits. The Macans just couldn’t maneuver through a steep, deeply rutted area, even with the vehicles in off-road mode, because the center diff lock as well as the PTM initiated wheel braking are both reactive. Momentum is lost and the wheels that have traction are not able to get the vehicle moving. We circumvented this problem by using numerous 2-3 foot long 4×4 wood blocks, a couple 2×10 planks, and rocks to decrease the approach angle, allowing the Macans to maintain greater momentum up and over the obstacles. Both Macans left black tire marks on the trail’s rocks, evidence of their strong efforts to succeed! It was a great adventure in learning the limits of the vehicles’ traction, and highlighted how capable all three generations of Cayennes are in low-traction off-road conditions. It also proved how helpful it is to have pro- active traction enhancing features such as center and rear differential locking, better ground clearance, and higher traction tires. And when needed, some creative trail grading is sometimes also necessary! 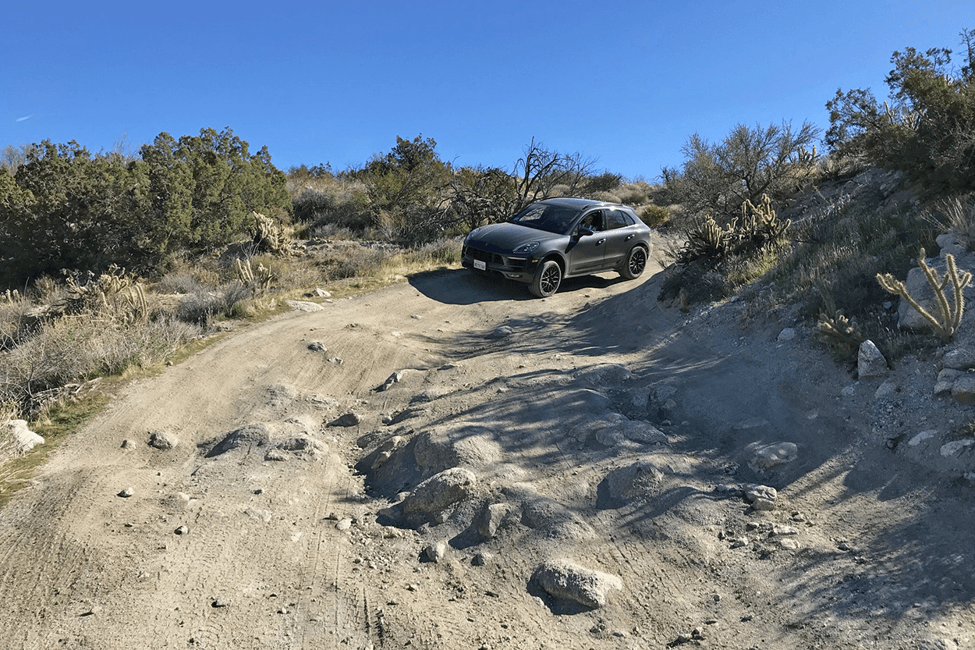 Above: A Macan GTS crawls down a rocky trail.

The trail had a lot more miles to go, with all of this steep rock-climbing action occurring after the first couple miles of driving, but everyone was still up for the adventure ahead. The next several miles of the trail were very tight single-width rutted mostly uphill roads with some steep dropping regions that everyone had a great time navigating. Everyone got experience crossing deep ruts at an angle to prevent scraping body parts, and most everyone learned exactly how wide their vehicles were in order to avoid scratching against the bushes and trees. Only one vehicle had a mechanical issue, where the trail became narrow between numerous very rough-surfaced granite boulders: A second generation Cayenne GTS bumped its tire’s sidewall on one of the boulders, which easily tore its sidewall open. Fortunately the Cayenne GTS came prepared with a full-sized spare, and thanks to the enthusiasm and camaraderie of the group, the tire was changed and the Cayenne GTS rolling in less than 10 minutes, possibly even less than five. 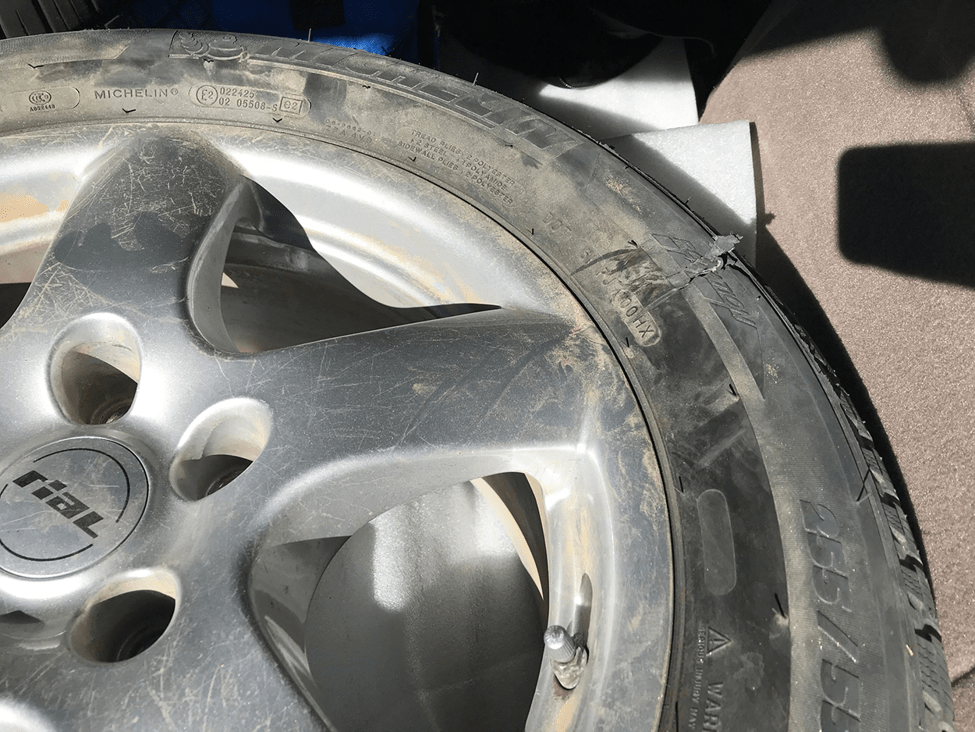 Above: Rocks can puncture tires if you’re not careful. Having a full-size spare like this owner did is always a good idea when off-roading.

Following the drive, the group met at a diner nearby and shared lunch together before heading home. The San Diego Region is fortunate to have so many year-round driving opportunities, and especially including ones tailored to test and experience the incredible capabilities of Porsche’s Cayennes and Macans. This drive drew members from our local region, the neighboring Orange Coast and Grand Prix Regions, and even Canada’s Wild Rose Region in Calgary. If you are in the area, keep an eye out for upcoming Cayenne and Macan-specific events on PCA SDR’s calendar at PCASDR.org/events/