Germans have long labored under the stereotype of being a little, well, buttoned up, a little too serious. But, like all stereotypes, this one isn’t a good predictor of individual behavior. Take, for example, our experience driving the 2016 Porsche 911 R in the hills around the company’s Stuttgart headquarters.

We were bombing along a rural highway, marveling at the R’s delicious exhaust note, when we noticed off to the right a pasture filled with naked animals. While they appeared to be sizable creatures, they were not, in fact, bovine. These were naked humans, bunches of them, reclining on folding chairs and blankets and basking in the Friday afternoon sun. And given the hue of their skin, which closely resembled the pure white of the Porsche we were driving, one would hope they were enjoying it responsibly, with a great, heaping mound of sunblock to protect their ample flesh.

The roads we were driving also were thick with motorcycles, as various Stuttgarters were looking to get an early start on the weekend. This is all to say, that, in our experience, Germany is not just suits, ties, and people who refuse to turn on the air conditioning. These people were happily hanging out, literally and figuratively, having fun for the sake of it. And clearly Porsche was having fun with this stripped-down, devil-may-care version of the 911. In fact, when the boss of Porsche’s GT division, Andreas Preuninger (who goes by “Andy”), talks about the R, he presents it as the automotive equivalent of a motorcycle.

“It’s a car just for a fun day,” he said. “It’s about how good you feel in the car and not how fast you can go.” The 911 R is neither buttoned up nor a particularly responsible car. It’s not a long-distance tourer, as many versions of the 911 have become. It’s loud. It vibrates in a way that a standard-issue 911 would never be allowed to do. Oh, and it comes only with a manual gearbox, thank you. It is as close to a purist’s 911 as is possible this deep into the regulated 21st century, and it is closer to Preuninger’s heart than anything else he has worked on in his 15 years on the job. 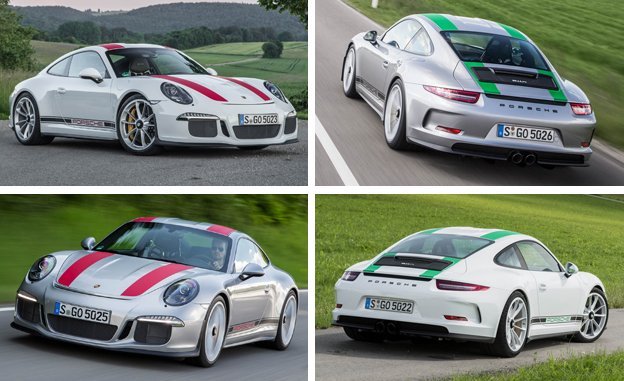 We at Save the Manuals HQ have a similar outlook. Even 911s with downsized turbocharged engines and dual-clutch automatics push our passion meter near the red zone. But a 911 with the 500-hp 4.0-liter naturally aspirated flat-six from the GT3 RS track car bolted into its ass, sending all that power through something not available in the GT3s, a six-speed manual gearbox? Now we’re talking.

But before we open our hymnals and commence with the boisterous praise, there is one thing you need to know: You can’t have a 911 R. No, not even if you can muster the $185,950 base price. This purist’s 911 is not a new model line. It is a (very) special edition. It’s constructed of steel, carbon fiber, and magnesium (among other less compelling ingredients), but once those elements are combined, the result becomes unobtainium. A grand total of 991 examples of the R are being built, a nod to the current 911’s generation code. Preuninger acknowledged that the company could surely sell at least a few multiples of that number. If the price and limited production were not significant enough barriers to purchasing one, consider that, at least in the United States, the 300 American 918 Spyder owners were given the right of first refusal. Porsche won’t say how many 918 owners bought 911 Rs. The company will say only that some of the U.S. allotment of Rs was purchased by non-918 owners. This turns the 911 R into an investment vehicle as much as a vehicle in which to pursue the joy of driving.

Okay, with that out of the way, let’s waste no more time in declaring the 911 R fabulous. The R is a parts-bin car, in the best possible way. It looks essentially like a 911 GT3/GT3 RS without the more obvious aero addenda. From the RS, the R gets a magnesium roof, carbon-fiber decklids front and rear, and carbon-fiber front fenders. According to Porsche, the R is the lightest of the current 911s, declaring its curb weight to be 3021 pounds. It’s wide and low, and its bulging fenders barely contain the delicate-looking 20-inch center-lock wheels. It wears sticky Michelin Pilot Sport Cup 2 tires (245 millimeters wide up front and 305 in the rear). Its engine is the same dry-sump 4.0-liter flat-six used in the GT3 cars, pumped to full RS spec, and it sounds, at its 8250-rpm power peak, like a Porsche Cup race car. It redlines at 8500 rpm, down from 8800 in the GT3 RS (and 9000 in the GT3), because of the increased centrifugal mass of its manual-gearbox clutch. The other applications of this engine are paired with dual-clutch automatics. That loss of ultimate engine speed, though, is no loss at all, since it is more than offset by the six-speed manual gearbox. It uses the same basic case as the seven-speed manual found in more mainstream 911s, but with reworked internals and no damn need for a fuel-saving, highway-only seventh gear. It’s just mass, donchaknow? 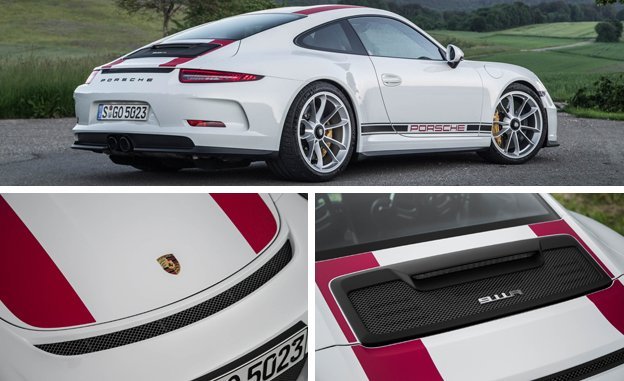 The cars we drove were equipped with a light single-mass flywheel (saving about 11 pounds over the standard dual-mass flywheel), costing $3650. This has two immediately obvious benefits: First, the engine feels eager to zing through its rev range. And second, at idle, it allows a level of vibration, rattle, and buzz to radiate from the gearbox, through the center tunnel of the car. This sort of rudeness, of course, would never be permitted in a standard 911. But in the R it feels like a statement of purpose and a rebuke of the NVH guys. The engine also contributes some vibration and noise at idle. And, again, it is welcome.

Other special bits and pieces include standard carbon-ceramic brakes that, yes, also contribute the occasional squeal to the chorus of noises but provide stand-on-the-nose, utterly fade-free stopping power. The car carries a conventional limited-slip differential, not any fancy electronically locking diff. Steering is by way of the same electrically boosted rack-and-pinion as used in the GT cars, but it’s tuned for slightly lighter weight. Likewise, the suspension is GT-spec stuff, with full adjustability, and uses the same spring rates and anti-roll bars. The dampers, however, carry a specific tune better suited to road driving than the GT stuff.

Tuck your behind into the one-piece carbon-fiber seats (fear not: they are sized for adult human beings, not race-car-driving waifs), and you’ll notice that Porsche has also added a smear of nostalgia to the R. The seats have leather-covered sides with vintage-Porsche houndstooth fabric inserts. The black-faced gauges carry light green markings, a reference to old 911s. The interior otherwise is pretty standard for a 911, except for the absence of rear seats. In case anyone fails to notice the retro vibe, optional over-the-top red or green stripes and Porsche name stickers can be fitted along each flank. There are only two standard body colors, white and silver, but about 10 percent of buyers paid an extra $6000 to have their cars painted in a color of their choice.

You could conceivably drive around in an R without its being recognized if you chose to forgo the stripes. The 911 R rides under the radar all the more because it ditches the big rear wing of the RS. The R has a specific underbody rear diffuser, which is not visible at eye level, and a relatively small front splitter to bring some downforce to the equation. But the R generates about a quarter of the rear downforce of the RS. The exhaust note, while plenty loud at high rpm, doesn’t include any silly, programmed-in showboating pops and crackles on overrun.

Rush them too much, though, or shift when your ears tell you to, and you will be short-shifting the thing at something like 6000 rpm. Stay in it. There’s little that is more satisfying than having this engine wailing away at 8000 rpm, ripping a quick upshift, and climbing back up to its power peak over and over again. We guarantee you’ll be going faster than you think you are. We didn’t bother trying to do the mental math to convert from kilometers to miles per hour. The answer would only have been some version of “fast” anyway. Throttle response is, well, perfect. It’s never touchy. But the engine is alive and always at the ready. Unlike in most other Porsches, pushing the Sport button on the center console does not change throttle response; why change what is already right? It only turns on the automatic throttle blips for downshifts. Don’t like that? Turn it off. It affects nothing else. We must say, though, we grew to really like it.

The R is an impressively neutral handler, too. You would have to try hard to generate understeer. But predictably, this is no tail-happy hoon-mobile, either. The car just feels planted and forgiving.

The 911 R is simply spectacular to drive. It is a joyous thing. And it’s proof positive that plenty of Germans know how to hang it all out there and just have a good time.