With the entire human history’s worth of knowledge and enough computing power in our pockets to go to the moon, it comes as a startling revelation when our digital devices get the simplest things so wrong. In this particular instance, I’m sitting in the driver’s seat of a Porsche 911 R en route to Tuttlingen, Germany, three hours west of Munich, and the weather app on my phone reports sunny skies with no chance of rain. The snare-drum tat-a-tat-tat on the roof and the sheets of water spilling over the windshield confirm that, no, it is not raining. It’s pouring.

This is a problem. I have 24 hours to test this car and return it to its keepers. What was supposed to be a plum assignment—cross the Atlantic while you sleep, blitz the autobahn in a 500-hp sports car, flog the thing to its limits on an empty airstrip, and hustle back to the airport to drive the new Porsche Panamera—is off to a rotten start. 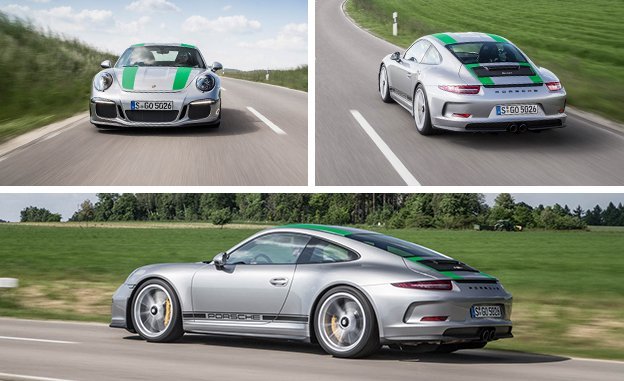 Škodas and Peugeots pace the R down the autobahn as the tires skate over puddles of standing water. The closer we get to Tuttlingen, the harder the rain falls and the higher my angst ratchets. Desperate for any illusion of control in an entirely uncontrollable situation, I scour Google Maps for alternative test venues, check and recheck the tire pressures, weigh the car in two separate locations, and binge on Haribo gummy bears and paprika potato chips. At 5 p.m., with our test venue shutting down for the night, I book a hotel room and pray that tomorrow’s clear-skies-and-sunshine forecast proves accurate.

The R is not just expensive and rare. It is exquisite to drive, a truth that was pretty much preordained since most of its hardware is borrowed from the clairvoyant, track-slaying GT3 RS. The naturally aspirated 4.0-liter flat-six is matched with rear-wheel steering, a limited-slip differential, and carbon-ceramic brakes. Pounds are shed with a magnesium roof, carbon-fiber front fenders and hood, forged wheels, reduced insulation, and removal of the rear seats. It dispenses with the RS’s aerodynamic addenda—most noticeably the tall, fixed wing—and weight. At 3042 pounds, the R has a 113-pound advantage on the GT3 RS. 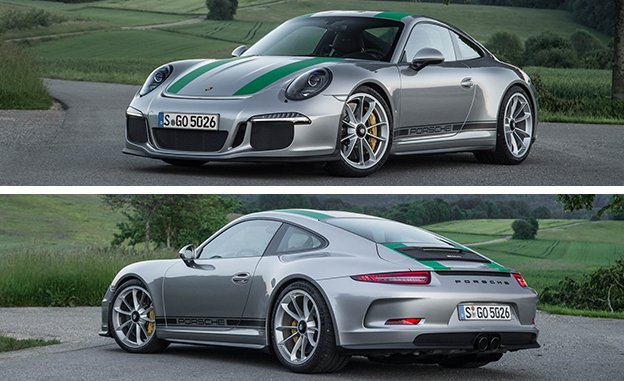 The R possesses a stealthier look fit for the street, but the real reason for its existence is the gearbox. The R trades the computerized perfection of the GT3 RS’s PDK dual-clutch automatic transmission—ruthless launch control and flawless shifts and all—for the romance of a six-speed, clutch-pedal-and-stick gearbox. Buy the GT3 RS and you’re buying a faster lap time. Buy the R and you are investing in your skill as a driver.

The R delivers what computers can’t yet replicate—the human experience. The 911 R creates bliss through the challenge and reward that comes from executing a complex task with easy grace. It’s the gratification of knowing a machine so intimately that every downshift becomes an unthinking, seamlessly rev-matched flurry of footwork and snorts from the flat-six engine. (An automatic rev-matching function is standard and can be turned off.)

The six-speed manual makes the engine sound a little sweeter and the steering feel more tactile. Is it a placebo effect? Almost certainly. But psychological benefits are still benefits, and there’s no denying that this one critical node in the man-machine interface makes every other connection that much more electrifying.

Of course, we already knew that the car is damn good to drive. That’s not news. We’re here for a performance-test baptism, to officially document the 911 R’s abilities in the historical record. As long as the weather cooperates. 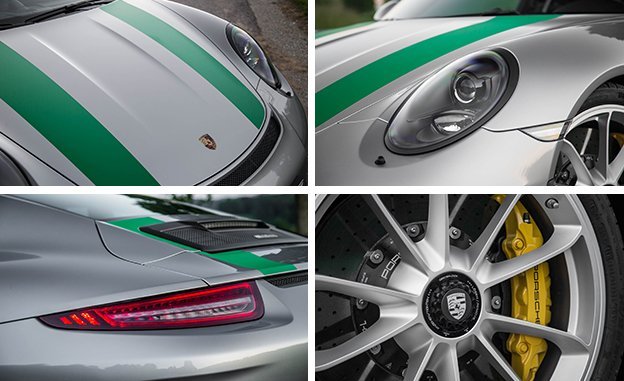 Dawn breaks with a warm glow and blue skies in every direction, but my mind won’t relax until I have the numbers in hand. The car is already instrumented with our VBOX test equipment, and I’ve been waiting at the locked door of the tower for 30 minutes when the air-traffic controller arrives at 9 a.m. as promised. Hands are shaken, paperwork is signed, radios are distributed, and finally I’m staring down 3750 feet of flat, straight, vacant tarmac.

In stark contrast with just how easy it is to launch a PDK-equipped Porsche, the R needs to be courted, to be understood, before it will give its all. Our test car is equipped with the single-mass flywheel, a $3650 option that accelerates the already-frenetic race to 8500 rpm. Revs rise and fall more quickly than with the standard dual-mass flywheel, which better damps engine vibrations.

The lighter flywheel comes with a reinforced clutch that doesn’t want to be slipped, though, and to extract the R’s best we’ll have to work within the 4000-rpm rev limiter that’s active when the car is stationary. Hold the tach needle against the limiter, and the throttle plate is just barely open when you drop the clutch. The better technique is to hold the revs around 2800 rpm, then stab the throttle and catch the clutch just before the needle clips 4000 rpm. 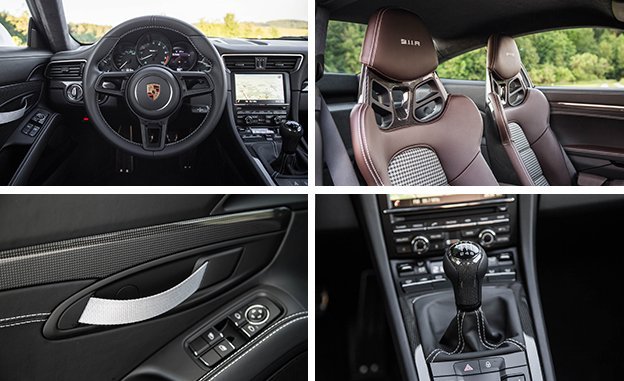 The launch requires delicate timing of left and right foot movements—computer-like precision from your own complex network of neurons and fast-twitch muscle fibers. Too fast on the left pedal and the engine bogs. Too slow and the engine nips the rev limiter, cutting power. It’s a challenge—and a big reward—to earn the final 0.2 second, even when you’ve tested and launched hundreds of cars.

When the getaway is perfected, the R simply disappears. Michelin Pilot Sport Cup 2 tires, size 305/30ZR-20 in the rear, sink into the concrete like it’s still wet. There’s no wheelspin, just forward propulsion and then the increasingly urgent need to brake. The time in between vanishes to the numb focus that’s required to make your hands, feet, and head keep up with the howling boxer engine.

Sixty mph appeared in 3.4 seconds. Triple-digit speeds arrived after 7.4. We were skimming the pavement at 126 mph at the end of the quarter-mile in 11.5 seconds. Not that there was time to appreciate any of that as it was happening. 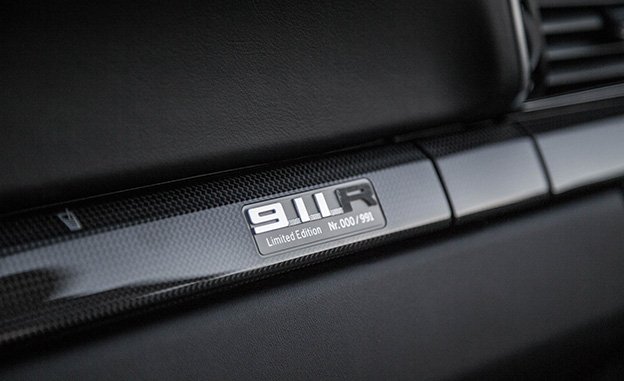 Stops from 70 mph throw you into the seatbelt, a 142-foot horizontal bungee jump that never snaps back. Cornering grip maxes out at 1.11 g with a confident, neutral balance. This runway isn’t long enough to verify Porsche’s claimed 200-mph top speed. Later, though, Germany’s immaculate road system and its attentive drivers clear the way for an effortless run past 160 mph.

The GT3 RS can take 0.4 second off the R’s 60-mph and quarter-mile times. A lowly base 911, the 2017 Carrera, with its 370 turbocharged horsepower and the PDK transmission, will even match the R’s zero-to-60-mph sprint. None of that makes the 911 R any less exceptional. On a great road or a technical track, the 911 R is the epitome of a driver’s car. It’s a sweet, sweet escape from the numbers-driven race to automated performance, and yet it still posts phenomenal numbers.

It’s 11 a.m. on the nose by the time I’ve packed up the test equipment, and I need to be back in Munich by 2 p.m. to catch the Panamera drive program. Google Maps tells me the trip will take three hours and fifteen minutes, but for the first time in a day, I’m not stressed. This 500-hp analog Porsche has reminded me that computers aren’t always right.