It’s subtle, but it’s there. Listen carefully when chugging along at low speed in Porsche’s new flat-four–powered 718 Boxster and you’ll recognize what you hear. Sure, it’s damped by water jackets and a turbo, distinctly lacking mechanical clatter and subdued by decades of internal combustion progress, but there’s no denying the fundamental thrum of the thing. Under it all is the undeniable lope of an air-cooled Volkswagen Beetle.

This probably isn’t what Porsche wants you to notice first about the new Boxster. And it’s not likely that it will be, because it’s all but indiscernible and you’ll be too busy caning the thing to be concerned with such nuance.

As before, Porsche’s new 718 Boxster initially comes in only two versions: the 300-horsepower base and 350-horsepower S model. Either can be had with a six-speed manual or a seven-speed dual-clutch (PDK) transmission.

Fifty horsepower is no pittance, but the difference between the base and S-model 718 Boxsters is nothing relative to the vast chasm that separates them, experientially, from their predecessors. The 718’s turbocharged flat-four powerplants, displacing 2.0- and 2.5-liters, respectively, are the headlining changes. Both yield 35 more horsepower than the 2.7- and 3.4-liter naturally aspirated flat sixes they replace. Torque is the big story, however, increasing by 74 lb-ft on the base car and 43 lb-ft on the S. 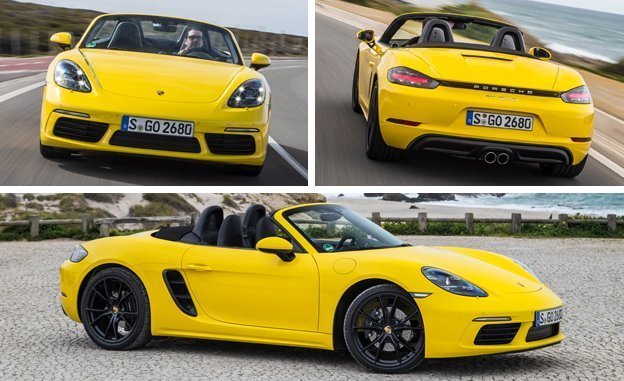 Furthermore, Porsche claims an improvement of up to 14 percent in the European fuel-economy drive cycle, though official EPA numbers are still forthcoming. In other words, on paper, these are the best Boxsters ever.

That both are fast and rewarding cars is not in question. Rather, it’s whether these improvements on paper translate into a better sports car driving experience.

The turbo engines’ power delivery dominates the changes in that experience. The S model torques its way out of corners with a guttural yank that seems somewhat out of character with the Boxster’s reason for existing. If this is a sports car meant for driving hard then it will, by its very nature, be driven at high rpm. It’s not as if this engine won’t rev—it will, the redline is 7400 rpm (just 400 rpm lower than the old sixes)—it’s that the need to do so and the payoff are now greatly diminished. The torque peaks much lower in the rev band (at 1900 and 1950 rpm in the base and S, respectively) than it did in the six-cylinder models—where the party started above 4400 rpm in the base and 4500 in the S—and it’s so abundant even at low rpm that it changes the drivetrain’s character.

Going back to the first-generation Boxster in 1998, the car’s most defining trait has been a world-class intake yowl climaxing in an incendiary crescendo just before redline. If that single, authentic virtue were the only redeeming experience in the old Boxsters—it wasn’t, by far—they still would have been fantastic. Now it’s gone, replaced by an aggregate of sounds, some genuine, some contrived, all mostly angry. 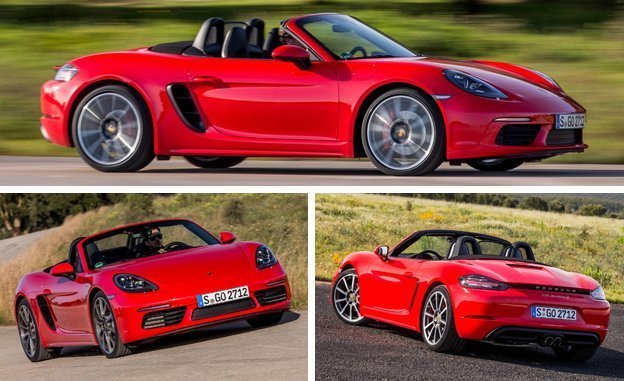 Around town there are faint turbo hisses that Porsche’s sound committee allowed to linger to production. Spin a gear to redline, however, and these are supplemented by a synthetic blat, which builds with revs. Utilizing the engine’s manifold pressure sensor, engineers tap the flat-four’s natural resonances and amplify them in the cockpit via a speaker built into the firewall. And it works. There’s noise. Some of it is good, but none of it will define this car.

Pushed hard in Sport mode, the flat four burbles and pops on overrun. Flip to Sport Plus, and these entertaining sounds vanish—a product of prioritizing response over aural drama. Opening the wastegate momentarily during engine braking creates the concert. Boost, however, relies on a closed wastegate, so Sport Plus mode sacrifices the charade to deliver better performance.

Gear ratios in the PDK don’t change from last year, which is to say they’re tall and the cogs widely spaced, which has long been typical of Porsche. The final drive is even slightly taller than before, while the base and S now share manual-transmission ratios—the taller set from the outgoing Boxster S. As such, PDK-equipped cars are good for about 74 mph in second gear while manual transmission cars wind all the way to 81 mph before needing third. The result is less shifting—which, Porsche representatives are quick to point out, is faster. We wouldn’t argue if shifting weren’t part of the driving experience to be relished. But in a world where the experience matters more than lap times, it is. Or should be. A shorter final drive and closer spacing between the lower gears would make it more fun.