It would be easy to brush off Porsche’s 718 Cayman as the second coming of a known quantity, old news even as it makes news debuting at the Beijing auto show. After all, the Boxster already went through its transformation to, well, a Boxster with 718 added to its name and a new range of turbocharged flat-four engines, and the Cayman is simply the same car only with a fixed roof. That’s underselling things, though, given how quick and entertaining the 718 Cayman and Cayman S should be.

Turbo, with a Roof

Like its Boxster sibling, the newly christened 718 Cayman drops its base 2.7-liter flat-six and the 3.4-liter flat-six from the outgoing Cayman S for all-new flat-four-cylinder engines. The entry-level powerplant is a 2.0-liter flat-four that produces 300 horsepower and 280 lb-ft of torque, increases of 25 hp and 66 lb-ft over the six. In the 718 Cayman S, a 2.5-liter flat-four churns out 350 hp and 310 lb-ft, useful gains of 25 hp and 37 lb-ft. Both engines share outputs and specs with those in the 718 Boxster models, including the S’s variable-turbine turbocharger technology that enhances engine response at low revs without sacrificing top-end power. 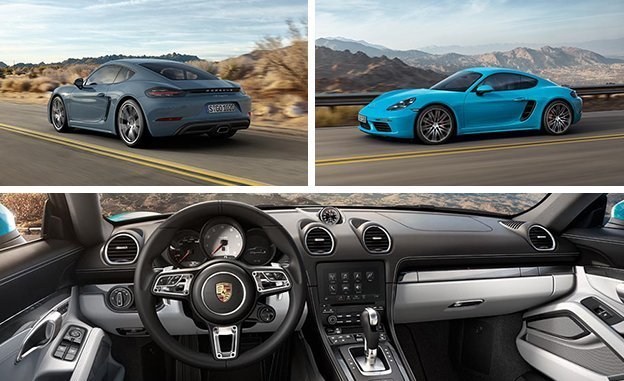 The Cayman no longer has a power advantage over the Boxster, but the bigger issue for some will be the loss of the Cayman’s sweet six-cylinder engines, one bound to trigger more than a few nostalgic comments on this story. We’re not heartless—those engines begged to be revved to redline, both because that’s where they made useful power and because they sounded amazing. That said, we’ve driven the new 718 Boxster, and while the six will be missed, the turbo fours are seriously capable engines that make far more power all over the rev range. Is some character lost? Certainly, but the turbocharged engines haven’t ruined the Boxster, only shifted its straight-line behavior from high-strung to powerfully relaxed, and we doubt the outcome will be any different on the Cayman.

Either engine can be paired with a six-speed manual transmission or a seven-speed dual-clutch automatic, and of course power is routed through the rear wheels. Even the chassis upgrades seen on the Boxster carry over here. The steering ratio is 10 percent quicker and shared with the 911 Turbo, and Porsche says the springs and dampers are firmer than before. Three suspensions are available: a standard setup with conventional dampers, a Porsche Active Suspension Management (PASM) configuration with adaptive dampers and a ride height 0.4-inch lower, and a PASM option available only on the 718 Cayman S with a 0.8-inch lower ride height. The base 718 Cayman now uses the previous Cayman S’s 13.0-inch front and 11.8-inch rear brake rotors, while the 718 Cayman S inherits the 911 Carrera’s four-piston brake calipers and thicker front rotors. 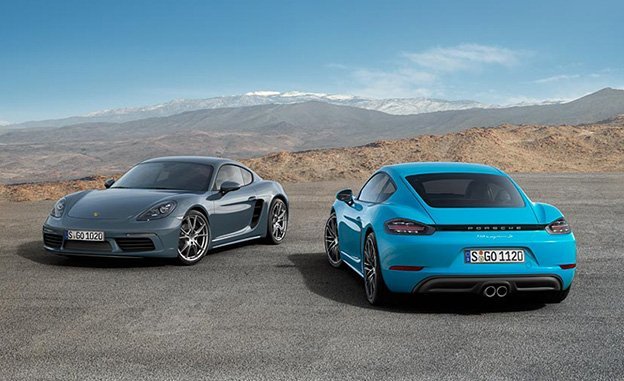 Although it’s not evident at first glance, the 718 Cayman wears nearly all-new bodywork. The visual refresh is as comprehensive as it is subtle; the standout changes include larger side intakes, the neat contrasting-color strip between the taillights, and a new front intake design. Inside, the dashboard has been massaged to incorporate new air vents and Porsche’s latest infotainment display that offers Apple CarPlay phone integration. And if that steering wheel looks familiar, that’s because it apes the design of the one in the 918 Spyder hypercar.

Yes, the new Cayman is essentially the new Boxster, right down to its engines, chassis, and cosmetic updates, just in coupe form. But there is a twist: Unlike the previous Cayman, the 718 coupe models will be $2100 cheaper than their roadster counterparts, starting at $54,950 for the base car and $67,350 for the S. That should take the sting out of knowing it no longer has a power advantage over the Boxster, even as it has crept up to cost $1300 more than last year’s base Cayman. For sports-car lovers who find the newly turbocharged Cayman’s improved performance carries more weight than its altered engine character, Porsche’s newest two-seater should be hard to brush off.