In our previous reviews of the stablemates for this 2017 Porsche 718 Cayman S—the Boxster, Boxster S, and base Cayman—we’ve already detailed the transformation from the previous naturally aspirated six-cylinder engine to turbocharged flat-four power. In short, the new engines are more powerful but sound completely different. This transformation stirs debate. Is a forced-induction four-banger that makes more power “better” than the former naturally aspirated flat-six that needed to be run out to redline to make power but sounded so beautiful while doing it?

The new 2.5-liter turbocharged four-cylinder generates 350 horsepower—25 more than the old 3.4-liter six—but it does not create operatic music. It instead emits a raspy, uncouth sound that strikes some drivers as unpleasant and grating in the way people can’t figure out how that nasally Dylan character landed a Nobel Prize for literature. It’s just so artless, they complain. In the case of this S model (and Bob Dylan, for that matter), they’ve got a point about the singing voice, but they’re wrong about artistry.

With 0.5-liter more displacement and a variable-vane turbocharger that comes into play earlier in the rev range, the S doesn’t suffer the turbo lag we noted in our test of the base Cayman with a manual transmission. It makes less boost (a maximum 14.5 psi versus 20.3 for the 2.0-liter), and its specific output of 140 horsepower per liter is lower than the 2.0-liter model’s 151, which means—depending on who’s reading—either that it’s less stressed or that there’s more room for aftermarket tuning enhancements. The larger point is that there’s a linearity to this engine’s response that, we’ll argue, makes it worth considering an S model with fewer options versus loading a base Cayman with Porsche’s notoriously pricey add-ons, despite a $12,400 gap in their base MSRPs.

Look at a graph of the torque and power curves (depicted in this review of a 2017 718 Boxster S) and you can see why—below 2000 rpm the 2.0-liter engine’s torque output sags like a loosely strung power line before it rises steeply toward the broad plateau from 2000 to 4500 rpm. In the S version, by contrast, the 2.5-liter’s torque curve makes a straight line to its higher but similarly broad peak output. Turn your attention to horsepower and the new Cayman S shows a straighter, smoother line from idle to its 6500-rpm power crest than did the 2014–2016 Cayman S with the flat-six that peaked at 7200 rpm. The latter had an agreeably split personality, mildly entertaining at low rpm but with a pulse-quickening ride to redline once the variable intake-valve system came into play around 4000 rpm. This “on-the-cam” sensation can be delightful in the right circumstances, and the auditory results won praise from drivers of our long-term 2014 Cayman S. That said, the ideal power “curve” wouldn’t curve at all but rise on a constant upward slope, with each additional 100 rpm accompanied by exactly the same portion of added power. The new Cayman S engine comes closer to that ideal than the old one did.

In practice, coupled with our test car’s seven-speed PDK dual-clutch automatic transmission, this results in a more nearly perfect Cayman. Mind you, that’s in the context of a car we’ve been putting on our 10Best Cars list pretty consistently for a decade (it missed joining the Boxster in 2013 only due to a model-year-changeover hiccup). Getting closer to perfection when you’re almost there is an incremental business. 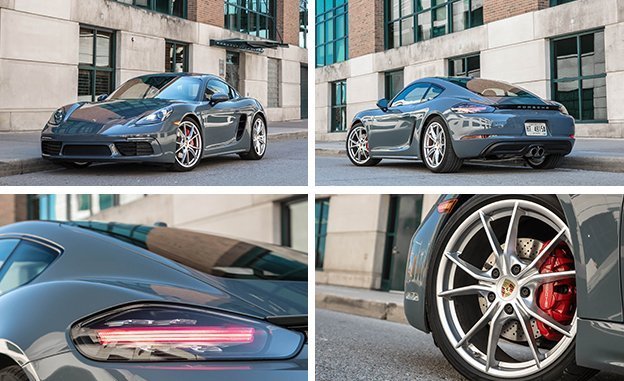 One measurable increment in this instance is an improvement in zero-to-60-mph acceleration to 3.6 seconds, fully 0.5 second quicker than our test result for the 2014 Cayman S with PDK. The advantage extends to all our acceleration tests, with the quarter-mile happening in 12.0 seconds at 117 mph, beating the old car by 0.6 second and 5 mph, and the 30-to-50-mph and 50-to-70-mph tasks being completed 0.3 and 0.1 second quicker. Both cars had the launch-control function that generally sees PDK-equipped Porsches outrunning their manual-transmission equivalents that lack that feature. The new car’s advantage in our 5-to-60-mph rolling-start test that obviates launch control’s advantage improved to 4.4 seconds from the old model’s 5.1.

Besides which, the Cayman S responds to throttle inputs superbly, delivering that just-right sensation that one iota more or less pressure on the pedal will result in exactly one iota more or less thrust. Modern electronics can help manage this feeling much better than in the old days of cables and levers, but it requires fine-tuning to make the controls, the engine, and the transmission programming all come together, and Porsche clearly has been painstakingly attentive here.

Bend the Road, Bend Your Mind

All of which works superbly in concert with the balance and roadholding this mid-engined sports car delivers when the road turns. Find your favorite ess-bend, preferably one like that on our undulating 10Best test loop, steer the Cayman through it, and there’s nothing else short of a supercar that delivers the way this Porsche does. It goes exactly where you point it and manages left/right transitions with aplomb. Get your inputs wrong so that you need to adjust your line, and the car shrugs off added steering, braking, or mild throttle amendments without a care. If you’d asked us what needed improvement on the Cayman, steering and handling would have been low on our list, and yet the 718 has firmer springs and dampers and a quicker steering ratio that together make this exercise even more rewarding than previously. Our test car had the PASM option ($2070) that brings both adaptive dampers and a 0.8-inch lower ride height, the Porsche Torque Vectoring system ($1320), and the Sport Chrono pack ($2440). Our long-term 2014 car was similar, except it had the non-adaptive Sport suspension in place of PASM, and they all work so well that we’d recommend any Cayman buyer consider that collective investment mandatory—Porsche should really just bump the base price up and include it all as standard on the S, at least. We’d also recommend this car’s GT Sport steering wheel, a $320 option we rued not having on our long-termer, and ($800) Sport Seats Plus. 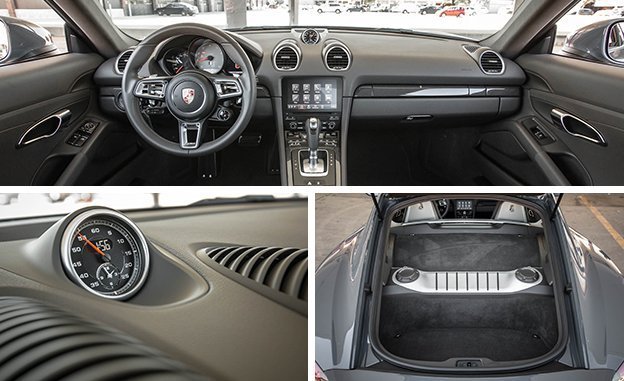 This Cayman S circled our skidpad at 1.02 g on its optional 20-inch Carrera S wheels ($1580) shod with Pirelli P Zero rubber. That’s a negligible 0.01 g behind our long-term car’s grip, which was matched by the regular Cayman tested earlier. For people who remember when only bewinged race cars could corner at 1.00 g, the amount of grip available on the open road is astonishing, but the car’s manners as it approaches the limit are even more so. On our skidpad, it understeered even less than did a Chevrolet Corvette Grand Sport pulling 1.18 g in the same test. The Cayman stopped from 70 mph in an excellent 142 feet, another number the like-priced Grand Sport can better (129 feet) by virtue of its grippier Michelin Pilot Sport Cup 2 tires. The Porsche-versus-Corvette question can continue fueling the bench-racer debates for years to come, but the engineers developing Chevrolet’s mid-engine C8 are sure to be benchmarking the Cayman’s balance, transitional behavior, and all-around ability.

Besides the aforementioned performance-enhancing options, the sticker price on our test car was inflated by Graphite Blue metallic paint ($640), the $3200 PDK transmission, $530 for seat heaters and another $730 for seat ventilation, plus $760 for seemingly needless dual-zone climate control, a $1535 carbon-fiber interior trim package, and $3030 worth of infotainment ($1300 for Porsche Connect Plus and $1730 for the navigation module in the Porsche Communication Management or PCM). Add auto-dimming mirrors with rain sensors ($690), a Light Design package ($340) and $185 to have colored Porsche crests in the wheel-center caps, all items we could live without. Those committed to the fully immersive driving experience might start paring that list with the PDK, opting instead for the six-speed manual transmission and a clutch pedal, but the dual-clutch alternative works so well in its paddle-shifting manual mode that the only real argument against it is the price.

Buyers planning to drive their sports cars daily, as opposed to exclusively on weekends and at the track, might find the Cayman S a little short on comforts like functional, accessible cupholders or easy stowage for your phone and oddments. Decide for yourself how to compare the utility of front and rear trunks that together add up to the same 15 cubic feet of space you’d find in a Corvette. 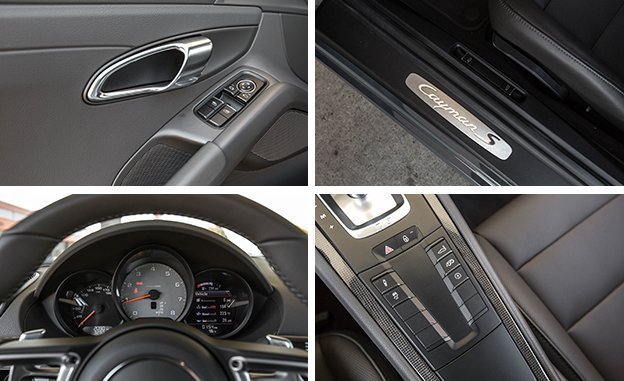 Which brings us to the last option on our test car, the Sport Exhaust system, with tailpipes in silver for $2450. We’d recommend it, not so much for the louder exhaust note when its flaps open, but for the improved character of the resulting sound. We took to pressing the button every time we got in the car just to tweak the most objectionable flatulent tones out of the low-rpm exhaust note in around-town use. Even at its loudest, the new car measures a four decibels quieter at wide-open throttle and one decibel less at a 70-mph cruise than did our long-term car with its similar option.

Reducing cylinder count and turbocharging will always change the engine sound in ways enthusiasts don’t love (ask any Formula 1 fan about the latest-generation cars), so we must be forgiven for this fine whine. But it’s an essentially pointless argument. Ignore those itching to pick a fight with, “It just doesn’t sound like a Porsche.” Drive a 718 Cayman S for three minutes and there’s no question it’s a Porsche. So that noise you hear? That’s what this Porsche sounds like. It’s not as if some treasured heritage rests solely in the sound of six cylinders deployed pancake-fashion. The 944 and 968 Turbos were four-cylinder forced-induction Porsches; the 356, 914, and 912 were flat-fours. If a 911 doesn’t sound like a 928 that doesn’t sound like a Cayenne, so what? Did Derek Bell climb out of his 962C after winning the 1987 24 Hours of Le Mans and complain that it just didn’t sound as sweet as the 917 he’d driven in 1971? No, he did not. Because he was about getting on down the road. And, uh, he had earplugs. Just get in the car and drive the wheels off the thing, already.