Well, bless their hearts, as they might say around Porsche’s U.S. headquarters in Atlanta, Georgia. Porsche officially says the 2017 911 Carrera S cabriolet with the PDK automatic transmission and the Sport Chrono package can accelerate from zero to 60 mph in 3.9 seconds. But that number is way off. It takes just 3.2 seconds, according to our measurements. So polite Porsche is, feigning modesty like that.

Surely Porsche knows that its most powerful rear-wheel-drive ragtop 911 ever can outaccelerate many other sub-four-second cars such as the BMW i8 (3.6 seconds) and the Jaguar F-type R (3.5). The Germans may or may not have known—until now—that it could beat the far more powerful and expensive Ferrari California T (3.3 seconds), but according to our test equipment, it does. All Porsche would say is, “Our values are on the conservative side.” Of course they are. No one likes a braggart. 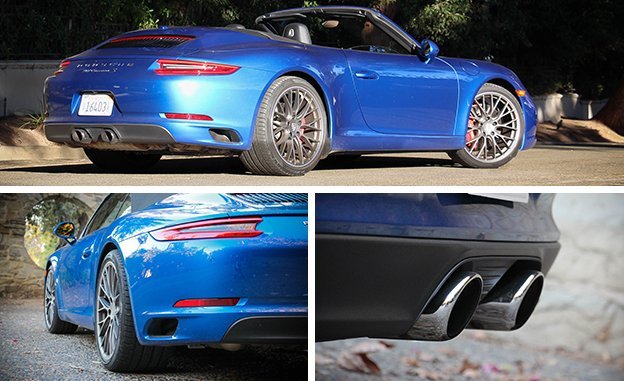 Nor does this lovely Sapphire Blue Carrera S cabriolet shout too loudly about its general awesomeness. The only overtly aggressive visuals on our test car were the optional matte-black 20-inch RS Spyder Design wheels ($2370), which came wrapped in the same staggered-width Pirelli P Zero tires (245/45 up front and 305/30 in back) as the 540-hp Turbo S. Otherwise, it looks like pretty much every other Carrera convertible roaming the streets of Los Angeles, where this road test took place. And there are a lot of them here, although none of them could beat this car in a stoplight drag unless they’re late-model Turbos with a capital T, and even those aren’t much quicker.

However ubiquitous the 911 may be in L.A.—if exclusivity is high on your priorities, there are better ways to spend $145K—our cabriolet turned at least a few heads, mostly on account of its striking, glittering blue paint job. While nearly everyone had lots of love for the extra-cost ($710) paint color, few seemed to notice the new fascias, the inboard-located Sport-exhaust tailpipes, or the vertical slots in the rear engine cover that denote this as a “991.2” model.

One notable exception was the driver of a Guards Red, manual-equipped 991.1 Carrera S cabriolet and his lovely blonde companion with whom we chatted during a side-by-side rush-hour slog down Sunset Boulevard—yes, it was such the L.A. moment—who asked if the mid-cycle changes represented true upgrades. He wondered if the new 420-hp turbocharged 3.0-liter flat-six engine was as good as the 400-hp naturally aspirated 3.8-liter flat-six that was making such lovely noises behind him and whether he should “go PDK” on his next 911. 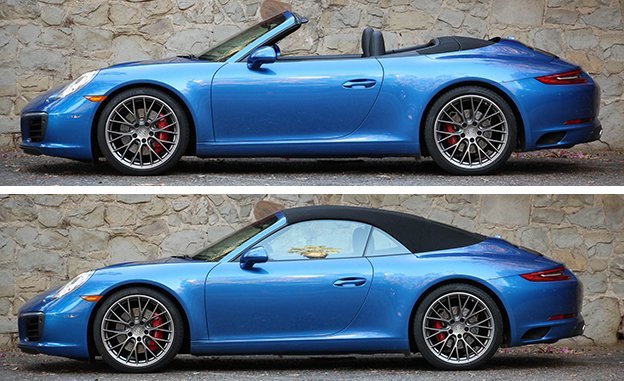 Funny that he of all people should ask, since about three years ago, we tested a Guards Red 2013 991.1 Carrera S cabriolet with the seven-speed manual transmission that literally could have been his exact car, sans the blonde. In any case, we could sum up our answers to his questions with, “yes, yes, and one second.” We say yes to the first, because the 991.2 refresh for 2017 brought a better-realized and Apple CarPlay–enabled infotainment system, a 918-inspired steering wheel, and three-dimensional taillamps, among other items.

Another affirmative to his second question, because whether it’s the 370-hp Carrera or the 420-hp Carrera S, these new turbo 3.0-liter engines are spectacularly responsive, torquey, and sweet-sounding all the way to their 7500-rpm redlines. And one needn’t keep them in the loftiest part of the rev range to exploit all their might, making them more tractable in daily use. There also are fuel-efficiency benefits of some 12 percent, according to Porsche, although those can prove elusive in real-world driving.

Finally, we’d answer the PDK question with “one second,” since that’s how much time, give or take a tenth, by which this test car bested the 2013 model’s zero-to-60-mph, 5-to-60-mph, and quarter-mile times. The 3.0-liter engine’s formidable 420 horsepower and 368 lb-ft of torque beat the 3.8-liter’s 400 and 325, with peak torque now available from 1700 rpm versus 5600 rpm for the old 3.8-liter. Incidentally, this car’s acceleration times are virtually identical to those of a 2017 Carrera 4S coupe we tested recently, which weighed an insignificant 32 pounds less but had the traction advantage of all-wheel drive. As with that car, however, we were not able to get anywhere close to the EPA’s 24-mpg combined rating; we managed only 14 mpg during our week in the droptop. Did we mention L.A. has a lot of traffic? 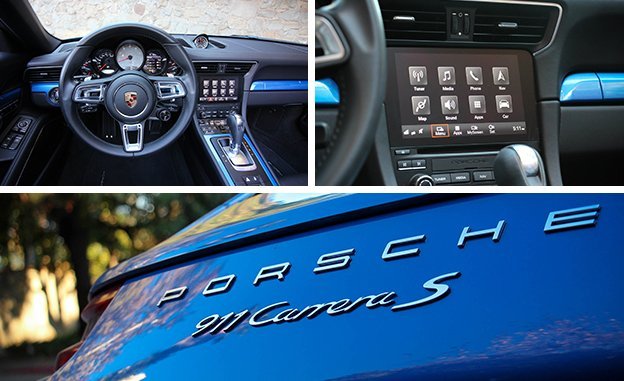 So the Carrera S cabriolet is really quick. And with 1.00 g of lateral grip, it really sticks, if not quite as tenaciously as some other Carreras we’ve tested recently at up to 1.06 g’s—still impressive considering this example didn’t have the optional PASM adaptive dampers. Braking to a halt from 70 mph was accomplished in an eyeball-popping 146 feet, right in the middle of the other 991.2 models we’ve tested. So much for the notion that going roofless necessarily degrades performance.

And doing so increases enjoyment of the car’s intoxicating aural soundtrack. Lower the roof on a warm evening—which can be done at up to 37 mph—and you’ll hear the flat-six’s mechanical symphony in full surround sound. Opting for the dual-mode sport exhaust, as on our test car, takes the experience to another level.

Top Goes Down, Price Goes Up

The dual-mode exhaust was part of a $6290 Sport package, which also included the Sport Chrono package, SportDesign mirrors, a small-diameter GT Sport steering wheel, and four-wheel steering to sharpen handling at speed and to ease parking and maneuverability at low velocities. Other options included the $850 lane-change assist system, $2320 power front sport seats with 14-way adjustability, the $3850 extended leather package, the $3970 Premium Package Plus (cooled seats, keyless starting, LED headlamps, auto-dimming mirrors, and more). We’d have happily saved $955 by skipping this car’s cheesy blue-painted interior trim; ditto the $430 rear-footwell lighting. We’re not sure what it costs to replace a damaged front fascia, but it’s likely more than the $2590 front-axle lift system, so that option might be worthwhile. 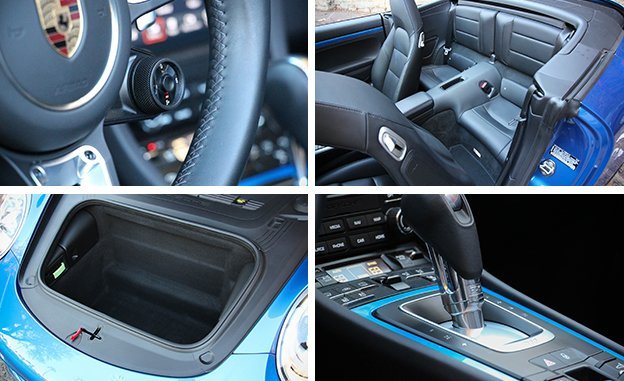 All those upgrades piled on top of the PDK-equipped Carrera S cabriolet’s heady $119,950 base price resulted in a grand total of $144,805. That starting figure is $4900 grander than the 2016 version and $12,300 more than the coupe, which is a lot of coin for a retractable roof, no matter how wonderfully fitted and well insulated it is. Porsche may not like to boast, but it certainly isn’t shy with its pricing.

That said, this is the quickest rear-drive ragtop Porsche we’ve ever tested. And in California, where one doesn’t have to go far to find a tight canyon road to attack, the sensory enjoyment of top-down driving makes a strong case for a convertible, especially one as visceral as this.