With the Porsche Macan following in the profit-generating footsteps of the bigger Cayenne SUV, it was only a matter of time before Stuttgart added a hotter GTS variant to the compact crossover’s lineup. In addition to a new base four-cylinder model, the GTS is new for 2017 and slots between the midrange Macan S and the high-test Turbo as a performance-focused option for practical enthusiasts. After spending a long, arduous day driving the GTS in Colorado—including a sprint to the 14,115-foot summit of Pikes Peak—we can attest that the newcomer’s heightened reflexes are exactly what the Macan needed.

Indeed, at $68,250 to start, the GTS promises a welcome addition to Porsche’s bottom line, particularly when the brand claims that initial orders have averaged about $88,000 with the Porsche-typical exorbitant array of options. While that’s notably more than the S model’s $55,450 MSRP, it’s not as dear as the $104,440 on the window sticker of the last Macan Turbo we tested (the Turbo version starts at $77,050 for 2017). 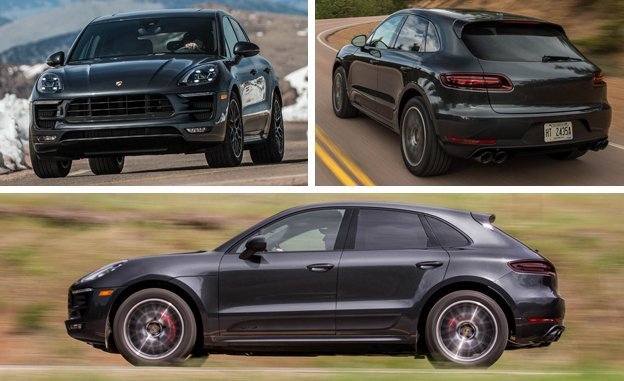 For that amount, GTS buyers get the S’s 3.0-liter twin-turbocharged V-6 with upgraded internals and revised tuning to produce 360 horsepower and 369 lb-ft of torque—increases of 20 and 30, respectively, over the S-spec engine. With the Turbo’s 3.6-liter mill developing 400 horses and 406 lb-ft, the GTS should split the difference between the two in the zero-to-60-mph sprint, which we expect to take about 4.4 seconds using the seven-speed PDK transmission’s launch-control function, included with the $1290 Sport Chrono package. The 375-hp 2016 Mercedes-AMG GLA45 should be a touch quicker still, but the Porsche is far more refined.

The GTS is no rocket on the open road. But it does feel stronger than the Macan S, and the standard variable sport exhaust emits a throaty warble when its Sport setting is active; without loud mode engaged, it sounds family-friendly and docile. Despite torque peaking at just 1650 rpm, there’s not much action below 3000 revs unless you are in the middle of a wide-open-throttle dash, and the power tapers near the 6800-rpm redline. Fortunately, the dual-clutch PDK automatic gearbox is there to swap in the optimal ratio with near telepathic acuity—an assistance that became ever more apparent at extreme altitudes where the V-6 would have wheezed otherwise like a pack-a-day smoker in a marathon. The PDK’s excellent programming makes it all too easy to forget about the standard steering-wheel-mounted paddle shifters. Thin air at the lofty elevation of our mountainous drive route surely hampered the full thrust of the upgraded V-6, but we’ll confirm our estimates as soon as we can get a GTS to the test track.

One of the Family

The dynamic benefits of the GTS’s chassis tweaks, however, were immediately apparent as we connected the 156 twists and turns of the temporarily closed-to-the-public Pikes Peak International Hill Climb course. The Macan’s optional air springs and PASM (electronically adjusted dampers) are standard on the GTS; this suspension adjusts through different heights and three levels of stiffness, with the overall setup being 0.4 inch lower and about 10 percent firmer than the standard Macan’s. There’s also a slightly stiffer rear anti-roll bar, which, when combined with Porsche’s optional brake-based torque vectoring and locking differential system ($1490), makes the GTS a surprisingly neutral handler. Aided by a greater rearward bias of torque distribution within the Macan’s active all-wheel-drive system, the GTS seemed to pivot around tight hairpins as if we had tossed out an anchor at the apex.

The GTS borrows the Turbo’s larger, 14.2-inch front disc brakes with red six-piston calipers (single-piston 13.0-inchers sit in back). Despite getting noticeably hot and soft in pedal feel on our descent from the mountaintop, the stoppers are generally firm and reassuringly capable of arresting the GTS’s two-plus tons; heartier carbon-ceramic brakes seem a bit silly here, yet they are available for $8150. The power steering also benefits from a new electric assist motor and revised tuning, which Porsche says are aimed at correcting one of our quibbles with previous Macans we’ve driven: the lack of tactility from a Porsche helm. While the steering feel obviously doesn’t mimic that of a 911, there’s now an entertaining dose of feedback for a crossover, and Porsche says it is applying the changes to all 2017 Macans. Pirelli Scorpion all-season tires on 20-inch Y-spoke RS Spyder–like wheels are standard GTS rolling stock; both 19s and 21s are available, though, as are stickier performance tires. While the Pirellis should allow the GTS at least to match the Turbo’s reasonable 0.89 g of adhesion on similar rubber, the updated chassis can quickly overwhelm their available grip when pushed. 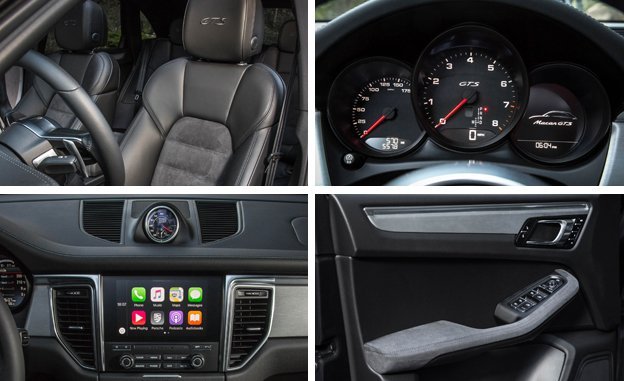 When that happens, retuned PTM (traction management) stability controls allow some yaw before stepping in, and the system can be completely deactivated. Actuating the GTS’s standard Sport mode sharpens the responses for the throttle, steering, suspension, and transmission. But the Sport Plus setting of Sport Chrono–equipped models turns everything up another notch and adds an intermediate Sport ESC mode, which is only available on the GTS and allows a bit more slip-angle leeway before intervening.

None of the changes, however, take away from the Macan’s drivability in the real world. Ride quality remains taut, but the adaptive dampers’ adjustability let the GTS shake off most pavement imperfections with little of the harshness we’ve experienced from other Macans on big wheels. Throughout our all-day trek—which took us from Colorado Springs to Denver, along the Platte River, and up both Pikes Peak and Mount Evans—the GTS stayed comfortable and composed. The slightly elevated driving position is pretty much spot on, and the standard eight-way power sport seats, which include faux-suede inserts and thicker side bolsters, offer excellent support. Cushier 14- and 18-way adjustable thrones are available, too. Other interior highlights include brushed aluminum trim and an optional GTS interior package ($4790), which, as on other GTS models, brings a Carmine Red tachometer, garish red seatbelts, and red contrast stitching on the seats and dash. Porsche’s latest PCM (communication management) infotainment system works great and now has Apple CarPlay integration; adding the optional navigation module ($1730) and Porsche Connect Plus ($1300) tacks on a LTE modem for Wi-Fi connectivity.

Although the examples we drove were wrapped in vibrant liveries commemorating Porsche’s past Pikes Peak racers, the standard GTS treatment is tastefully subdued with painted lower body sections, black wheels, and numerous gloss- and matte-black accents. Porsche, of course, will let you customize countless interior and exterior details to your liking—for a price. Yet the base GTS’s starting price is a few grand below that of a similarly equipped Macan S, and even then you can’t get the former’s specific performance upgrades.

The Macan GTS still seems awfully expensive for a lifted hatchback that’s a bit tight on space for cargo and four adults and not as exciting to drive as a hot sports sedan with more room inside. The criticisms of compromise inherent with any Porsche SUV still apply here. But with the GTS treatment, the Macan now drives even more like a proper Porsche.