The Porsche Macan is one of our favorite SUVs, so much so that we named it the best luxury compact on our 10Best Trucks and SUVs list. Built atop the Audi-designed MLB modular-longitudinal architecture, it offers a delightful balance of speed, style, and utility. It recently won a comparison test against the excellent Jaguar F-Pace, and it still looks as great as it did when it was introduced three-plus years ago. Now Porsche has added a dollop of extra power to the top-of-the-line Macan Turbo—a full 40 horsepower, actually, a 10 percent bump to the 400 horses produced by the direct-injected, twin-turbocharged 3.6-liter V-6. Given Porsche naming conventions, you might expect that such a vehicle would be called the Turbo S, but it is instead the Macan Turbo with the newly optional Performance package.

Those 440 horsepower are available at 6700 rpm, while maximum torque—rated at 443 lb-ft, up 37 from the regular Turbo—is served up on a generous plateau stretching from 1500 to 4500 rpm. This translates into superior straight-line performance: Porsche estimates the sprint from zero to 60 mph now takes just 4.2 seconds, a full 0.2 second quicker than its figure for the regular model with the optional Sport Chrono package. (Sport Chrono—included with the Performance package—adds features such as launch control and the aggressive Sport Plus driving mode and is itself good for a 0.2-second improvement, Porsche says.) The estimate is surely conservative, since 4.2 seconds is how quickly we reached 60 mph when testing a 2015 Macan Turbo without the added horsepower but with Sport Chrono. 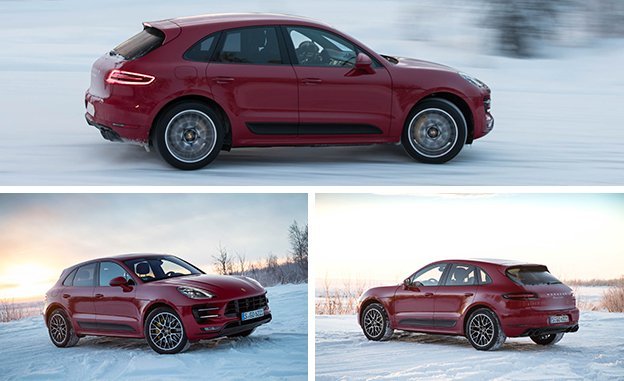 The engine is mated to a seven-speed “wet” dual-clutch automatic transmission, and they work in perfect unison. The shifts are ultraquick in the Macan’s performance-oriented modes; in Sport Plus, the engine maintains torque during upshifts, as opposed to the common approach of reducing torque during the shift, to make the car feel as though there is an extra little push with each shift. Even in the less extreme modes, the extra power of the Performance package makes a noticeable difference. The engine and exhaust note strike a balance between sophistication and aggressiveness, leaning toward the louder side when the standard performance exhaust system opens its flaps. Switch to Normal mode and enable the stop-start system, and the engine decouples from the transmission when coasting. More efficient, but it comes at the expense of agility; it takes a moment to re-engage when the driver steps on the throttle.

When the Macan Turbo is equipped with this Performance package, its chassis rides lower than the regular Turbo’s by 0.4 inch, mirroring the enhancements of the 360-hp Macan GTS versus the 340-hp Macan S. The electrically assisted power steering is nicely weighted, and the braking system has been upgraded over the regular Turbo with thicker and larger front rotors. Tires remain identical; this Macan is shod with staggered-width 235/55R-19 front and 255/50R-19 rear rubber. We drove it on asphalt, on snow, and on ice—whatever the surface, it offers a fantastic blend of sportiness and comfort. In fact, it excels in both, a rare achievement in any automotive segment. It is virtually impossible to upset this chassis. 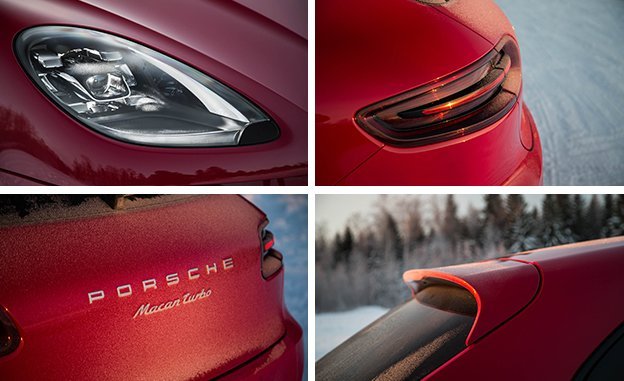 While neutral and forgiving in nature, there is a playful side to the Macan. The stability-control system has a Sport setting that allows for significant drift angles, but you also can turn it off entirely. The rear-biased all-wheel-drive system makes it easy to coax the Macan into a drift, controllable with your right foot. Porsche’s Active Suspension Management (PASM) system is standard with this package and adjusts damping force to minimize body roll, dive, and squat, while the optional brake-based torque-vectoring system all but throws the hatchback into corners.

Visually, the Macan Turbo with the Performance package does not differ from the regular Turbo with the exception of ride height, but it can be enhanced with the usual array of pricey Porsche options, including a Turbo exterior package and 21-inch wheels of a 911 Turbo design or a Turbo interior package with the obligatory carbon-fiber and faux-suede accents for the décor. 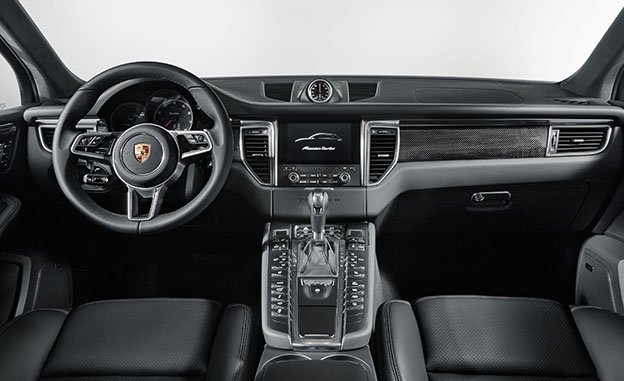 The few visual changes to the Performance package could explain why Porsche doesn’t call it the Macan Turbo S. But we also think that Porsche may be saving that moniker for an even more powerful offering designed to take on the expected Mercedes-AMG GLC63.