Fewer than one in 10 new Porsche 911s has three pedals, which means the vast majority of 911 buyers are happy to shell out an extra $3200 to let a PDK dual-clutch automatic do the shifting. We get it. It’s a great gearbox. PDK is quicker than the manual, it’s easier to live with, and it’s smart enough to make you look like an ace on a road course. And yet, to someone adept at shifting gears, letting PDK handle everything is like watching two computers play chess.

Thankfully, Porsche still lets us play with a shifter and clutch. We might lack the moves of Deep Blue, but there’s joy in trying. Which leads us back to the fact that the manual Carrera isn’t as quick to 60 mph as its PDK equivalent. Now, before you blame our shifting skills, know that it’s mostly in the launch. Manual 911s won’t rev past 4200 rpm with the clutch in and first gear selected. Therefore, the launch isn’t as aggressive as the about-5000-rpm clutch engagement enabled by the PDK’s launch control, which should really be renamed launch out-of-your-control. 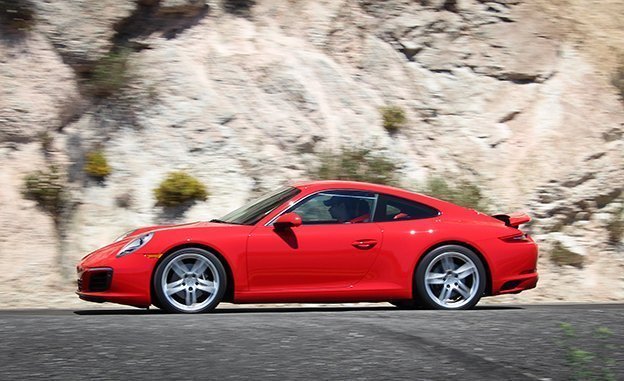 Turbos aren’t just for 911 Turbos anymore. Both the Carrera and Carrera S share a new twin-turbo flat-six engine for 2017. The Carrera’s lower-output version of the 3.0-liter gulps up to 13.0 psi of boost to produce 370 horsepower and 331 pound-feet of torque—20 more horsepower and 44 more pound-feet than the naturally aspirated 3.4-liter it replaces. That old engine’s peak torque didn’t arrive until 5600 rpm, and there wasn’t much enthusiasm below 4000. Turbos fatten the engine’s low-end grunt substantially, providing a serious shove from 2000 rpm on. The power delivery is strong and linear all the way to the 7400-rpm redline. At very low rpm there’s a hint of lag as the turbos scramble to shove air into the engine, but the delay is short-lived. This Carrera is quicker and, more importantly, always feels stronger than the car it replaces.

As hard as it will be to find a new 911 with a do-it-yourself gearbox, it’ll be nearly impossible to spot one that costs less than $100,000. It only takes a few options to swell the $90,450 base price to six figures, even if this stripped 911 stickered at $96,650. The priciest option on this Carrera is a $2950 sport exhaust that amps up the sound of the flat-six. Use the $3000 you saved by getting the manual to get the loud pipes. 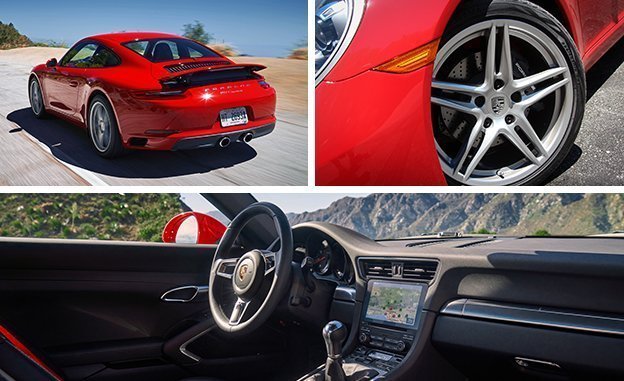 Even in its basic form, the 911 has a 1.00-g chassis and the ability to stop from 70 mph in 145 feet. On the smaller 19-inch wheels there’s slightly more tire sidewall, which lessens impact blows, but the steering is as sharp and talkative as it is with the 20s. A 911 without rear-wheel steering and active anti-roll bars lacks the supernatural stability of 911s equipped with those features. But with its manual gearbox and few options, this Porsche leaves the driver more directly responsible for the experience. You won’t go out to the garage to find it playing chess with itself.

To make more sweet flat-six noise, the Carrera’s optional sport exhaust uses two electronically controlled flaps to route the exhaust stream around some of the muffler baffles. Hit the exhaust button on the center console, and the flaps swing open. But even if you don’t press the button, the exhaust flaps will automatically go loud above about 3300 rpm. At full throttle, there’s a noticeable difference in the sound level because of the Porsche’s Sound Symposer system. Sound Symposer consists of two tubes that connect the engine intake to a speaker-like diaphragm in the cabin. In “normal” mode, only one sound tube is enabled. Press the sport or sport-plus buttons, and a second sound tube is switched open, which further increases the engine sound inside the car by five decibels at wide-open throttle. Fortunately, the sport exhaust doesn’t add any loudness at a steady 70-mph cruise in seventh gear, as the engine turns at less than 2000 rpm and the sound tubes to the engine remain relatively quiet at part throttle.