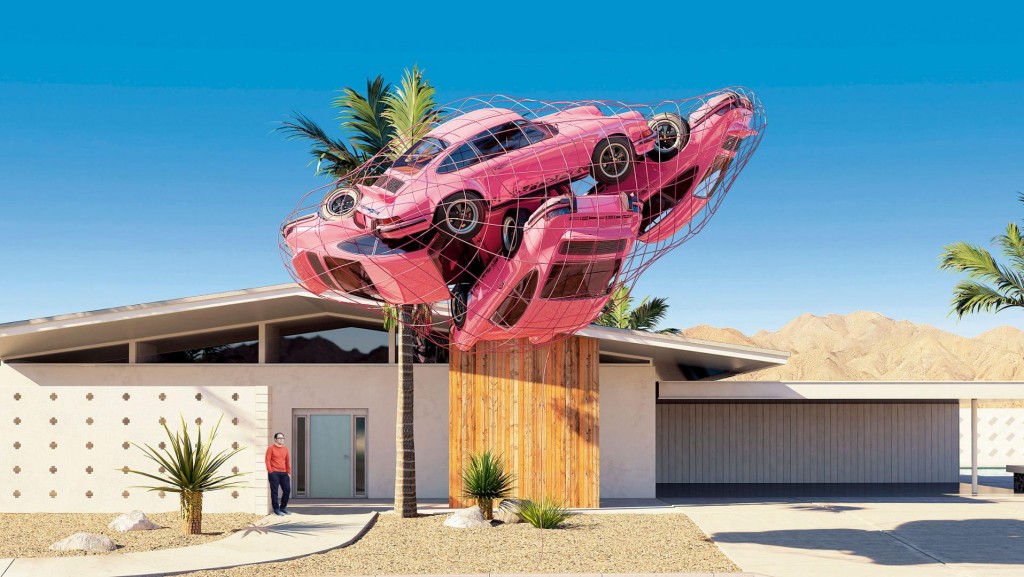 This story begins on a slightly discordant note. The source of contention is just five months old, a pug-beagle mix that is, without question, extremely cute. But his name is Enzo, despite his aster’s known love for one thing above all else: Porsches! “Yeah,” says Chris LaBrooy with a grin and a conciliatory wink. “His middle name just might be Ferdinand.” Well, in that case …

Chris LaBrooy lives with his wife, Jessica (who is originally from California), their nine-year-old son, Chase, and now Enzo in a townhouse on the outskirts of the small Scottish town of Ellon. Enzo can hardly contain himself at the sight of guests and runs circles around them like a helicopter. After all, not many visitors find their way to LaBrooy’s hometown, located about half an hour north of Aberdeen, with a population of just over 10,000. One site of interest near Ellon is the abandoned Tolquhon Castle. A weathered monument with a nearly unpronounceable name, it has a notable history in one respect. William Forbes, an ancestor of the present-day lord, built it as a defense against enemies, but the castle was never attacked. The locals are keen to point out that the reason it never saw action is because of its hidden location—no potential aggressors ever managed to find it.

The television is on in the LaBrooys’ living room, although no one is watching it. We follow the artist into one of the small rooms on the ground floor of his narrow brick house. A bookshelf, three chairs, a desk with an enormous monitor, and a graphics board—that’s his studio. He needs nothing more to give life to his extraordinary visions.

LaBrooy is a product designer who earned his master’s degree from London’s renowned Royal College of Art—a top-notch education. Following his studies, he began designing furniture and other largely practical objects. During this early stage of his career, he realized two things. First, that he has a talent for capturing—and not infrequently surpassing—reality in a special way with his computer- animated renderings. And second, that images can be enormously alluring. To illustrate this last point, he mentions Marc Newson, a designer he admires. Newson’s shiny aluminum Lockheed Lounge was the most expensive piece sold at auction by a living designer for more than a million pounds (around $1.7 million): an iconic item. “Everyone loves it,” says LaBrooy. “But very few people have ever seen the object itself. They love the image of it.” The image in both senses of the word.

A Porsche Cayman undergoes a metamorphosis

A turning point in LaBrooy’s career was marked by his resolution to “stop making things!” People don’t need most things anyway, he points out. But they do need his images—as shown by the demand for them. His first works for local architecture firms were followed by more complicated projects for oil companies in Aberdeen. LaBrooy specializes in bringing typography to life. He turns real objects into letters and words. A letter-based installation of his that spells out “Made in the USA” was featured on the cover of Time magazine. It’s hard to top that.

Sculptures that seem to float

But “hard to top” is not enough for LaBrooy. Right from the beginning of his career, he was interested not only in typography-based projects but also in free-form sculptures. He uses them to create new and independent worlds composed of architectural settings and dream sequences in which automobiles undergo fabulous metamorphoses. To be clear, his creations are not inspired by Hollywood blockbusters like Transformers or its many sequels. “My work has nothing to do with that,” he says quietly but firmly. “I don’t do battling robots.”

He turns on the computer, picks up the pen on the graphics board, and skillfully draws a few lines. Each stroke is barely a millimeter long: up, down, right, left, back up again. In just a few minutes, the outlines of an urban landscape appear on the monitor: an initial sketch, nothing more. “It takes weeks to produce the final image,” he says, “even though computers can do a lot these days. You get immediate feedback on your ideas.” He demonstrates this with a car, which he paints in a matter of seconds. He then adjusts the virtual position of the sun, instantly repositioning the shine on the paint job. LaBrooy’s work is a quiet process, a contemplative journey into a world of dreams that proceed to take form on the screen. The artist sits at the computerin full concentration, his head of dark hair nearly motionless. He now sketches a Porsche Cayman, which promptly transforms. Just a few strokes of the pen give it a massive triangular underbody structure—including an enormous hole in which a second, and similarly strangely altered, Porsche is caught. The result is a somewhat combative fusion of two chassis that seem to entwine yet attempt to free themselves—and also a sculpture that appears to hover weightlessly in space.

Porsches in a pool

LaBrooy’s 3-D graphics radiate an unusual calm and composure, due to the clean quality of the illustrations as well as the spaces in which the objects are embedded. On a filing cabinet below the bookshelf lies a 16.54- × 23.39-inch print. It shows a modern villa with a swimming pool in which twelve light blue Porsches bob side by side. A key element of such an image is the sophisticated architectural backdrop. LaBrooy places sculptures such as the pool ensemble against casual case-study houses in California’s Palm Springs, motel parking lots with shimmering neon signs, and avant-garde Japanese urban architecture from the 1970s. His works are for sale on his website. Thus far, LaBrooy has earned his living from contracts placed by agencies and magazines, and has no need for a gallery. “Not yet,” he says with a smile.

Chris LaBrooy: A native of Scotland who studied product design

In order for the architecture to appear as realistic as possible, LaBrooy leaves nothing to chance. “I have an enormous library of all conceivable materials, textures, and surfaces. That allows me to replicate nearly every building with the realistic qualities of a photograph,” he says. Yet his watchful eyes and camera are constantly in search of new materials—for example, from the ancient and hidden fortress that was never attacked. Although not far from his home, the gray stone walls of Tolquhon Castle have not yet found their way into his library.

We make the twenty-minute drive to the castle in LaBrooy’s red Cayman. He clearly enjoys the sound of the car—which he describes as a piece of art, visually and acoustically. As a designer, he is also fascinated by the Porsche brand and the constant evolution of its models. “The transfer of engineering from motorsport projects to road-going models gives me an extra sense of confidence as a driver,” he adds.

LaBrooy would like to drive his Porsche in true sporty fashion, like zipping along a German autobahn. But there’s no chance of testing the Scottish speed limit. “The police are very strict here—they have zero tolerance for speeding. And that makes total sense on these small country roads.” So the dream of high-speed driving and strong centrifugal forces—like that of Porsches hanging like fruit from California palms—remains in LaBrooy’s world of images. At least for now.