Source: Car and Driver
Full Article: Everything You Need to Know About the VW Diesel Emissions Scandal 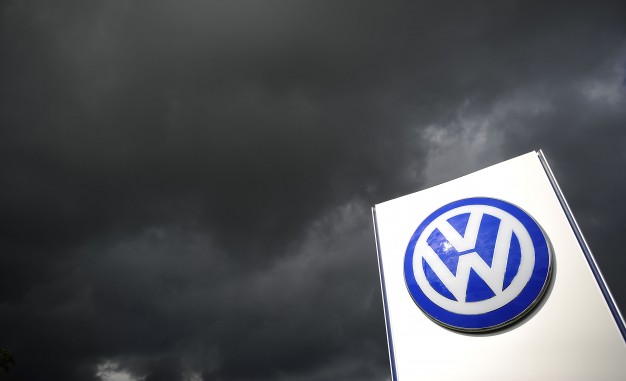 General Motors and Toyota had their massive scandals. Now it’s Volkswagen’s turn. The company, which owns 70 percent of the U.S. passenger-car diesel market, is in major trouble for cheating on diesel-emissions tests. After years of promoting “Clean Diesel” as an alternative to hybrid and electric vehicles—the company even marched on Washington with a squadron of Audi TDI models—Volkswagen is stewing in its own toxic vapors. Here’s our handy guide to what’s happening.

Volkswagen installed emissions software on more than a half-million diesel cars in the U.S.—and roughly 10.5 million more worldwide—that allows them to sense the unique parameters of an emissions drive cycle set by the Environmental Protection Agency. According to the EPA and the California Air Resources Board, who were tipped off by researchers in 2014, these so-called “defeat devices” detect steering, throttle, and other inputs used in the test to switch between two distinct operating modes.

In the test mode, the cars are fully compliant with all federal emissions levels. But when driving normally, the computer switches to a separate mode—significantly changing the fuel pressure, injection timing, exhaust-gas recirculation, and, in models with AdBlue, the amount of urea fluid sprayed into the exhaust. While this mode likely delivers higher mileage and power, it also permits heavier nitrogen-oxide emissions (NOx)—a smog-forming pollutant linked to lung cancer—that are up to 40 times higher than the federal limit. That doesn’t mean every TDI is pumping 40 times as much NOx as it should. Some cars may emit just a few times over the limit, depending on driving style and load.

Which cars are affected? Will my car pass state inspection?

The following Volkswagen, Audi, and Porsche diesel models have been cited by the EPA for emissions violations. There is no recall and the cars pass all state inspections, at least for now. Remember, VW has admitted to violating federal emissions laws, and as such, it’s neither a state nor a safety issue. However, if Volkswagen does issue a recall, some states (particularly California and some that follow Partial Zero Emission Vehicle standards) may prevent owners from renewing their registration if they don’t complete the fix.

What diesels can’t I buy?

Volkswagen, Audi, and Porsche dealers can’t sell any new diesels. Additional certified pre-owned diesels are also under stop-sale orders. The following cars cover models and model years that go beyond those cited by the EPA, which has not ordered VW to halt sales. This list of banned diesels comes directly from VW corporate, although more models could be added. Other 2016 diesel models scheduled to debut, such as the 2016 Passat TDI, have not even entered dealer inventory and may not for months.

When will my car be fixed?

Right now, this is unclear. Volkswagen has said only that it would begin repairs in January, but the U.S. market has not been singled out for specific service jobs. There are three generations of the 2.0-liter turbo-diesel four-cylinder, and all will require different fixes (from simple software updates to complete, and potentially performance-crippling, hardware retrofits). Then there’s the 3.0-liter turbo-diesel V-6, which VW executives in Germany deny even has a problem. On those models, Audi said on November 23 it would update the software and “resubmit” its emissions applications after the EPA found undocumented “auxiliary emission control devices” that were allowing excessive levels of NOx. About 85,000 Audi, Porsche, and Volkswagen models use the 3.0 TDI engine.

On November 25, Volkswagen detailed a fix for European 1.6-liter diesel engines that installs a mesh insert within the air intake, plus a software update for the newest EA189 2.0-liter diesel engines. No changes have yet been announced for U.S. models. A federal judge in California has set March 24 as the deadline by which Volkswagen must explain its repair plans.

Don’t all automakers tailor their cars to ace the EPA test cycle? Why single out VW?

Automakers optimize powertrains for each second of the EPA’s dynamometer tests (Federal Test Procedure 75, the one VW’s computers detect, runs for 1370 seconds). They have to, because they’re required to self-certify every model on sale. The EPA verifies roughly 15 percent of those tests each year. In rare cases, automakers grossly overstate fuel economy (as Ford and Kia did) and can take advantage of loopholes in the certification process.

Yet these standardized tests, flawed as they may be in comparison to real-world driving, are critical. Performed correctly, they’re at least an accurate method to assess legal compliance and provide a fair comparison for consumers. Right now, there’s no indication that automakers program their cars to run in a wildly different fashion on the road, even as the EPA and the German government attempt to prove otherwise. Volkswagen explicitly did, and that’s why it’s getting hammered.

What are selective catalytic reduction and urea injection?

Diesel fuel is carbon-rich and close in composition to home heating oil. As such, it’s inherently dirty and sooty when burned. While heavy-duty diesel pickups, vans, trucks, and other commercial vehicles follow looser environmental standards, light-duty vehicles have it tough—and nowhere is it tougher to certify a diesel car or truck than in the U.S. In order to trap particulates and curb nitrogen oxide in practically all new diesel engines, selective catalytic reduction (SCR) and urea injection must be used.

A three-way catalytic converter in gasoline vehicles treats exhaust gas by both oxidizing (adding oxygen to convert carbon monoxide and other hydrocarbons to carbon dioxide and water) and reducing (removing oxygen to convert nitrogen oxide to nitrogen and water). But diesel engines burn so lean that they require separate oxidation and reduction catalysts. After diesel exhaust passes through the oxidation catalyst and a particulate filter, diesel exhaust fluid (DEF, branded by VW as AdBlue) is injected into the stream before entering the reduction catalyst. DEF is a precise mixture of one-third urea and two-thirds deionized water and must be refilled (typically at manufacturer-recommended oil-change intervals) from a separate tank.

If this sounds complex and expensive, that’s because it is. And very likely, that’s why VW chose not to install SCR and urea injection on most of its TDI models.

What’s going to happen to Volkswagen?

Since news of the first violation broke on September 18, one-third of the company’s market cap has been wiped out with its nosediving stock price, and the company has abandoned its goal at becoming the world’s largest automaker by 2018. Volkswagen is not even concerned with its U.S. sales numbers until this problem is resolved, according to chairman Herbert Diess. The company has posted consecutive monthly losses since November.

Volkswagen has set aside more than $7 billion to cover recall-related costs, but CEO Matthias Müller—who said the company didn’t lie but faced a “technical problem“—has suggested the company may need more. On January 4, 2016, the U.S. Department of Justice sued Volkswagen on behalf of the EPA, which can technically fine Volkswagen up to $37,500 per car—a potential $18 billion punch. Given how the federal government has treated General Motors and Toyota in their respective scandals, VW probably won’t get hit that hard. But Volkswagen’s profits and cash reserves undoubtedly will suffer from the fines, lawsuits, and incentives, so much so that Müller has ordered a strict review of all 300-plus models across VW Group’s nine brands.

Internal audits inevitably will lead to firings, restructuring, and other corporate changes. So far, though, even seemingly frivolous divisions like Bugatti aren’t getting axed. Former CEO Martin Winterkorn, who resigned in September, reportedly received a memo regarding the diesel problem in May 2014. He has not confirmed whether he actually read it.

As part of its “Customer Goodwill Package,” Volkswagen is handing out $1000 cash to every owner of a VW TDI named in the EPA’s first violation notice (not the second notice announced November 2). That means nearly 482,000 people can get a $500 prepaid Visa card to spend on anything and another $500 cash card valid only at Volkswagen dealerships (to use toward another car, service, or lots of VW hats). They also get free 24-hour roadside assistance for the next three years. Audi, Porsche, and VW TDI owners who took delivery after November 8 are not eligible (full rules here). Current owners of any VW model can get a $2000 cash rebate toward a new car. Dealers also have “discretionary” cash they can use to sweeten deals (and they’re getting guaranteed kickbacks for some models). Basically, if Volkswagen is on your shopping list, now’s the time to haggle like a pro. Volkswagen may also buy back more than 100,000 cars as part of negotiations with the U.S. government, but this is not yet confirmed.

All right, I’d like some more free money. How can I sue?

There are already a couple hundred lawsuits alleging economic harm against VW’s now-infamous “Clean Diesel” marketing campaign and the half-million cars under EPA violation. None have yet been consolidated before the Judicial Panel on Multidistrict Litigation, but expect most, if not all, to be sometime next year. For the time being, Hagens-Berman, a huge firm that squeezed $1.1 billion from Toyota and intends to sue General Motors for $10 billion, has a class-action lawsuit ready and waiting. Volkswagen has also retained victim-compensation lawyer Kenneth Feinberg, the same man behind the General Motors ignition-switch payouts, to figure out a similar arrangement.

What are TDI owners actually doing?

As Greenpeace and other environmental groups lambaste VW, the obligatory news articles profiling angry TDI drivers have popped up. Granted, there are some people genuinely upset with VW for misleading them over their car’s emissions levels. But as we see it, the majority of TDI buyers are knowledgeable enthusiasts in love with sky-high fuel economy, torque, durability, and low running costs. Some really frugal types convert their TDIs to run on refined vegetable oil or biodiesel. These people are diehards.

If any fix Volkswagen proposes ends up hampering performance—be it increased fuel consumption or a loss of power—many TDI owners may very well ignore a recall. It’s a tricky legal situation, as neither the EPA nor the National Highway Traffic Safety Administration can force individual owners to update their cars. Several bills in Congress have proposed banning registration renewals for car owners who don’t complete recalls, but they’re a long way from becoming law. For now, most TDI owners are continuing to putter about. It’s also too early to prove that resale values have dropped significantly. With more time, we’ll have a fuller picture.

This story was originally published on November 13, 2015; it is being constantly updated to reflect the latest developments in the VW diesel-emissions scandal.