Source: Car and Driver
Full Article: Expect the Next Porsche 911 to Keep Its Engine in Back, Arrive in 2019 or So 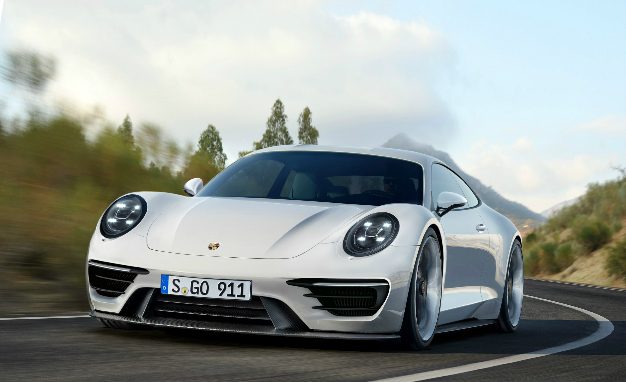 The latest Porsche 911 RSR, a full-fledged race car for 2017 competition, has adopted a mid-engine configuration that has Porschephiles around the world speculating that this radical change might be reflected in the next production 911, too. What with the next Corvette going in for a midship design, mightn’t Stuttgart find this a good time to break its own chains of tradition? It seems, though, that it’s all just speculation. We hear such a bold decision is highly unlikely for Porsche’s next-generation passenger car, precisely because it’s first and foremost a passenger car.

The 911, with its engine way back in the rear, allows for a modicum of comfort even in the tiny rear seats, something that would be impossible to achieve with a true mid-engine layout. But we have learned that the engine might be moved forward in the chassis just a little; in terms of driving dynamics, moving it forward even an inch could aid all-around balance.

Slated for a debut in late 2018 or 2019, the next generation of the quintessential German sports car will feature an even wider track than the current model, especially up front. As reflected in the accompanying illustration, the corporate face resembles that of the new Panamera. The 911 will continue to have rear-wheel drive, with all-wheel drive offered as an option, as it has been since the 964 model generation.

For now, our sources say we can rule out a four-cylinder variation of the 911, and that’s fine, given the incredible combination of performance and efficiency offered by the current range of turbocharged flat-six engines. It also widens the distinction between the 911 and the four-cylinder 718 Boxster/Cayman range, a gap that had grown uncomfortably close early this decade. There is historic precedent for a four-cylinder 911: the Porsche 912, fitted from 1965 to 1969 with the four-banger out of the 356, and the 912E, powered in 1976 by a Volkswagen-sourced engine derived from that of the VW 411/412 (this last was shared with the VW-Porsche 914). The 912 was unloved in its time, and it doesn’t enjoy the 911’s collector status today—this four-cylinder model is a lesson some still remember in Stuttgart.

What is happening in the 911 propulsion department, however, is that a plug-in-hybrid variant is nearly certain for the next model. It will offer about 30 miles of purely electric range and, fittingly enough, be offered only with an automatic transmission. Which is not likely to excite anyone who got all juiced up about the mid-engine 911 RSR.