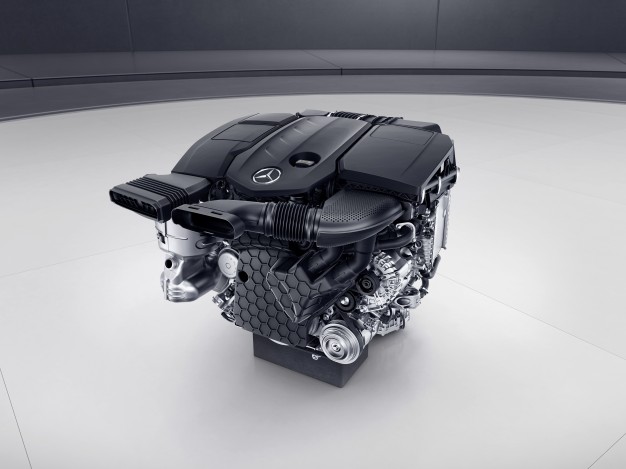 In Woody Allen’s 1973 sci-fi send-up Sleeper, his character finds a 200-year-old Volkswagen Beetle in a cave and starts the engine, which turns over without the slightest hesitation. Allen could have substituted a W115 Mercedes 200D in the same ridiculous but truth-based scene. Mercedes-Benz diesels, like air-cooled VW flat-fours, are pretty much indestructible. Now, Mercedes has released a new generation of its venerable four-cylinder diesel.

The latest OM 654 2.0-liter turbo-diesel four-cylinder debuts in the Euro-spec 2017 E220d this spring, and sometime later in the U.S. (with a higher numeral, due to our hubris over engine size). It replaces the OM 651 2.1-liter diesel in service worldwide since 2008, although our time with it was considerably shorter; it arrived here in 2013, first in the GLK250, and then in the E250 and ML250 BlueTec models. Of that engine’s three strengths offered in Europe (250, 220, and 200), we received only the most powerful. 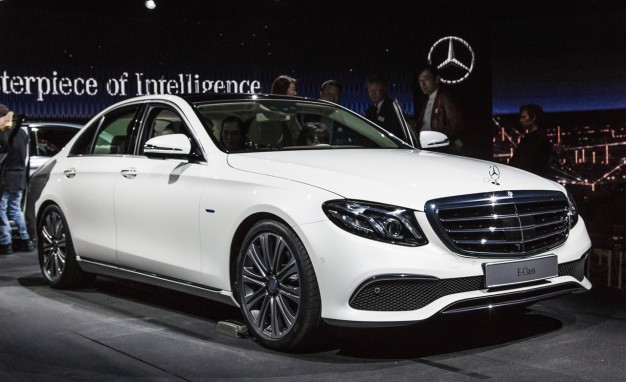 More so than output, the big news is the OM 654’s cast aluminum block, as Mercedes is waving goodbye to the trusty cast iron block for four-cylinder diesels. This helps the new engine save a claimed 101 pounds (with all mounted accessories) versus the OM 651 220-spec diesel. Mercedes also used aluminum for the oil pan, reduced cylinder spacing by 0.16 inch, removed the second series turbocharger in favor of a single setup, and switched to plastic engine mounts, which reduce both weight and vibration. Each of the cylinders displaces 0.5 liters—many manufacturers believe this volume provides max power and efficiency—and is lined with slippery Nanoslide, an iron-carbon coating on the cylinder walls that cuts friction.

For the pistons, Mercedes engineers chose steel instead of aluminum, leveraging the metal’s lower conductivity to improve combustion at higher temperatures and reduce friction between 40 and 50 percent. This is possible since aluminum, when hot, expands at a higher rate than steel, so the more tightly controlled clearance between the steel piston and the aluminum cylinder wall becomes especially advantageous, according to Mercedes. 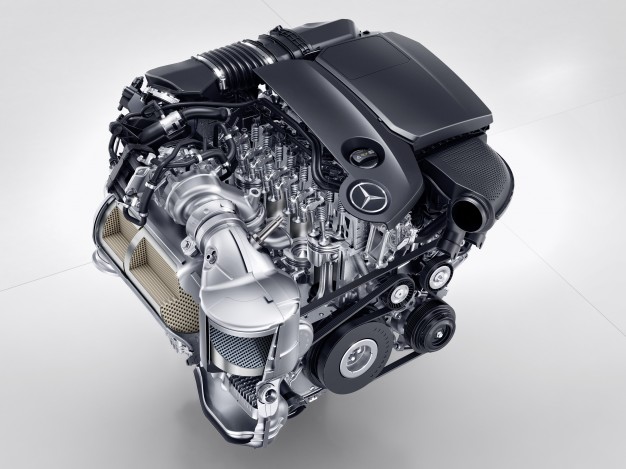 In the wake of the VW TDI scandal, we can’t talk about a diesel engine without bringing up exhaust emissions. Here, Mercedes installed all of the after-treatment components within the engine compartment. Instead of particulate filters and a trunk-mounted urea tank located downstream, these parts are installed on the engine itself. Even both catalytic converters—one for oxidation, the other a selective catalyst reduction (SCR) that reduces nitrogen oxides—are mounted as close to the engine as possible so that it won’t require the lengthy cold-start warmup procedures that have gotten VW into more trouble with the feds. This should also make it easier to install diesel powertrains across multiple vehicles.

We don’t yet know how efficient the new engine is, or when it’ll appear in the new E-, GLC-, and GLE-class models. The brawnier 3.0-liter turbo-diesel V-6 currently in the full-size GLS350d isn’t going away. And thankfully, neither is Benz’s commitment to any of these hardy, longlasting oil-burning engines.