A thorough redo of the Boxster is here, though after spending a week with the outgoing Spyder, we have to conclude that nothing needed fixing. A close kin to the Cayman GT4, the Spyder is a limited-production model that borrows the 911’s engine.

The hand-me-down six comes from the older 911 Carrera S, not to be confused with the new turbocharged 3.0-liter flat-six that powers the refreshed 911. We love the old naturally aspirated 3.8-liter, even here, in its detuned, 375-hp state. It has just the right amount of snarl from the intake and a deep metallic rasp from the standard sport exhaust. This engine gives new meaning to talking behind your back. 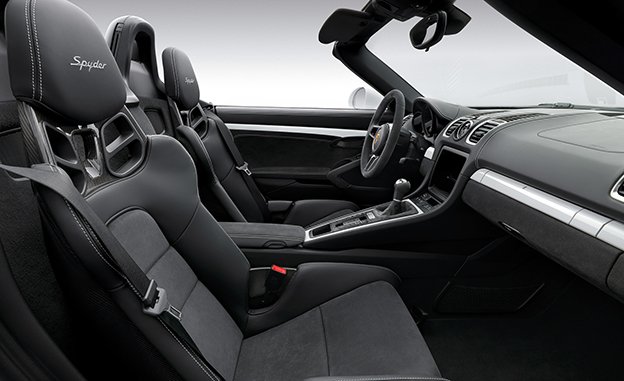 It might lack the low-end torque of the boosted 911 engines, but revving the Spyder to its 7600-rpm redline and shifting the six-speed manual is mechanical bliss. Running it hard never feels like abuse. On the contrary, it seems better and happier the harder you push. Its joy becomes your joy.

As previously noted, Porsche’s electrically assisted steering is the best we’ve laid hands on. The Alcantara-wrapped steering wheel provides real feedback. It’s so good it almost feels unassisted. Grip is phenomenal at 1.01 g’s, and the chassis is planted and secure all the way to that point. Likely due to its narrower rear tires, the Spyder is more neutral than the GT4, which only makes it more engaging. We prefer the Boxster Spyder’s chassis setup to the GT4’s, even if the latter has more ultimate grip.

From a dynamics standpoint, the Spyder nears perfection. The top takes more steps and time than the standard Boxster’s, true. But when a car gets you this high, you won’t know or care if the top is up or down. You’ll just want another hit of 7600 rpm.

“Improved agility” is a meaningless platitude tossed around by auto execs at introductions of glittering new models. But in the case of Porsche’s latest Boxsters, the words are apt.

Both the outgoing Spyder and the new 718 Boxster benefit from a quicker steering rack that does indeed improve agility. That the rack is shared with the longer, heavier 911 Turbo might just make it the best parts-bin tweak in history. Ironically, even the uncompromised Cayman GT4, the performance pinnacle of the outgoing Boxster/Cayman platform, didn’t get this unit.

The rack’s 15.0:1 on-center ratio is substantially quicker than the 16.6:1 used in outgoing Boxsters. Both use a variable ratio that decreases numerically as it’s turned farther from center. In other words, the more the wheel is turned, the more steering lock it yields. The result is less response in the straight-ahead position and more response when cornering. Quicker steering is a subtlety not lost on competent drivers, and its effect is noticeable, even without back-to-back drives in Boxsters with different racks.

Balancing the more direct steering are wider rear wheels, which yield a wider track and, to some extent, counteract the more rapid steering. Such are the nuances of chassis tuning. New Boxsters gain 0.5 inch in rear-wheel width on both base and S models, up to 9.5 and 10 inches versus their outgoing counterparts. The Spyder’s rear wheels are wider still at 10.5 inches.

We might, for now, lament the loss of the Boxster’s flat-sixes, but it’s hard to argue with an already-good chassis—old or new—getting even better. —Josh Jacquot