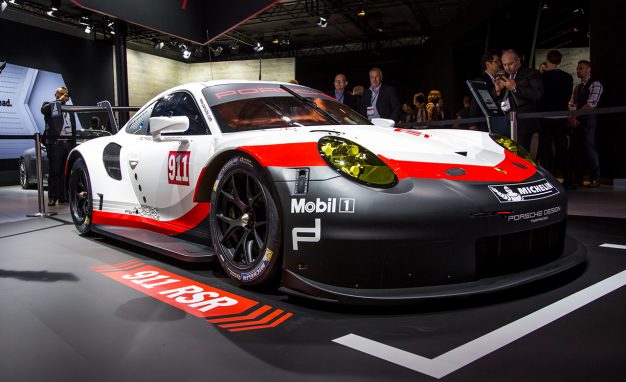 Audi may be abandoning Le Mans, but the Volkswagen Group is still very much in the game. Proof is resting on the Porsche stand at the Los Angeles auto show—an all-new rendition of the Porsche 911 RSR, Zuffenhausen’s latest machine designed to take on the competition at the most awesome auto race in existence and history. It’s a mid-engined rendition of the 911 designed to defend the brand’s honor.

The 911 is a fixture in the GT classes at Le Mans, but Ford’s success with the new GT served as a wake-up call. Porsche needed to react, but its 911 had a problem—its weight distribution, with the engine far in the back, makes the asphalt eat voraciously through the tires. With the new RSR, Porsche has essentially turned the 911 into a mid-engined car. The engine is positioned just in front of the rear axle instead of behind it. That’s where the sequential six-speed gearbox now resides. This allows for far more efficient airflow through the rear diffuser. As a result, the new 911 RSR generates more downforce, and at the same time, the drag coefficient suffers less than it would have from bigger wings. The wing that is used, Porsche says, is similar to that on its 919 prototype racer, overall winner at Le Mans in 2016. 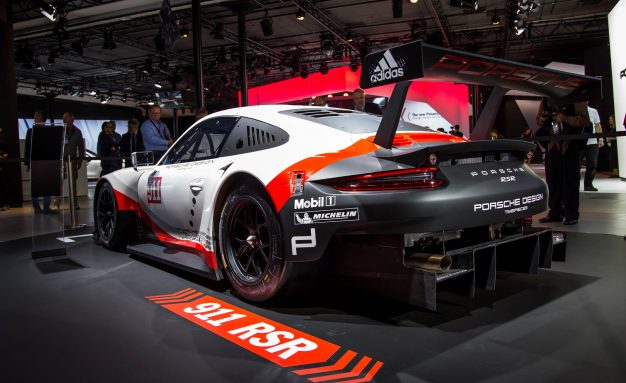 Unlike Ford and Ferrari, Porsche is sticking with a naturally aspirated engine, a newly developed direct-injected, 24-valve 4.0-liter flat-six, rated at around 510 horsepower, depending on the sanctioning body restrictions. It also says the new 911 RSR is safer than before, with the driver’s seat farther away from the door. It’s a fixed seat; Porsche adjusts the pedals and the steering wheel to make the car fit the driver perfectly.