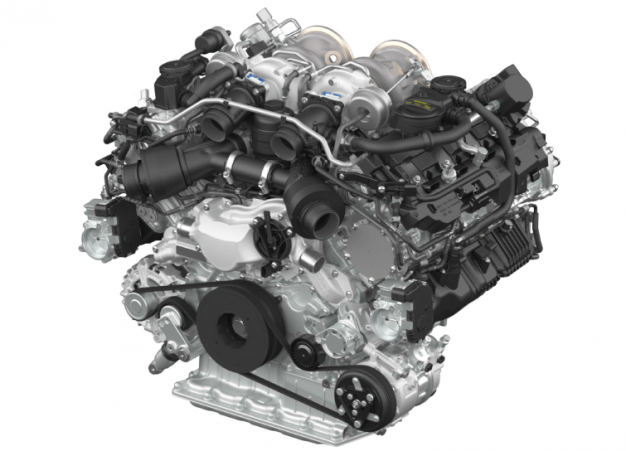 Porsche is taking the lead on the development of the Volkswagen Group’s V-8 engines—and that’s why it presented the “newly developed V-8 turbo engine from Porsche” at the 37th International Vienna Motor Symposium. While the new V-8 will launch in the new Panamera Turbo, it’s not solely a Porsche engine. It’s loosely related to Audi’s new, turbocharged 3.0-liter V-6—launched in the new S4 and Panamera bound as well—and it will migrate to a number of the VW Group’s upmarket models.

Its appearance spells the end of the 4.8-liter V-8 engines currently offered in the Panamera and the Cayenne, but fret not. We’ve had some experience with this new engine, and we can attest that it delivers everything expected of a true Porsche engine, especially high-end performance. Force-fed by two twin-scroll turbochargers, it’s rated at 550 horsepower which is available at 5750 rpm, and 568 lb-ft of torque from 1960 to 4500 rpm—redline is 6800 rpm. That puts it virtually on the level of the previous Panamera Turbo S with its 4.8-liter turbo.

The new engine also consumes a lot less fuel than its predecessor, thanks in large part to the cylinder-deactivation system. What the engineers call “half-engine mode” is activated at low loads between 950 and 3500 rpm, and it can cut fuel consumption by up to 30 percent. The engine also is optimized for start-stop systems and, Porsche points out, for hybrid applications. So, we eventually might get turbocharged V-8 engines with additional electric boost? That’s kind of exciting.

The new engine theoretically can be built alongside Audi’s new, turbocharged 3.0-liter V-6—and both of them are designed to fit longitudinal architectures like the Audi-developed MLB platform or the Porsche-developed MSB platform. On the former, it will be mated to a ZF-sourced eight-speed automatic with a torque converter; on the latter, it will be coupled with a ZF eight-speed dual-clutch automatic.

Look for the new, Porsche-designed V-8 to appear in a wide range of vehicles, including the Porsche Panamera and Cayenne, uplevel Audis, the Lamborghini Urus, and a number of Bentley models.