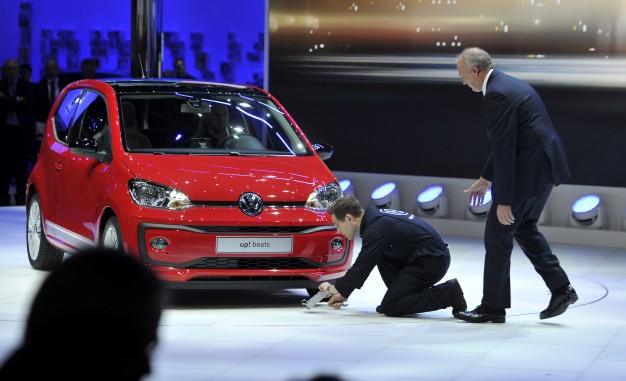 Considering the enormous scope and still-pending implications of the Volkswagen diesel-emissions scandal, the automaker has managed to deflect criticism and downplay the severity of its outright deception fairly effectively. However deserving the automaker is of being punished—and it is deserving, there can be no doubt about that—surely the last thing VW wanted was the stink of Dieselgate to waft over its proceedings at this year’s Geneva auto show. But those wishes evaporated today when, as reported by The Telegraph, a protester holding a small item labeled as a “cheat box” appeared onstage during the VW press conference and began tinkering with the freshly unveiled Up! subcompact while declaring that “CEO Matthias Müller said it’s okay if no one finds out about it!”

Arguably one of the most well-executed real-time performance-art protests since “Soy Bomb” joined Bob Dylan on the stage at the 1998 Grammy Awards, the VW incident occurred just after the Up! subcompact had been driven onto the stage by Volkswagen marketing chief Jürgen Stackmann. Clad in a very authentic-looking set of coveralls complete with VW logo, the protester, who is reported to be British comedian Simon Brodkin, somehow managed to get onstage and elude the security detail long enough that many in attendance were unsure whether the act was part of the show. For his part, Stackmann kept his cool, quickly replying, “It doesn’t need repair, it’s a perfect car, thank you very much. Enjoy the show.”

As you would expect, the entire incident was captured on video by numerous attendees and news outlets including the Wall Street Journal, which snagged the footage seen here. And now we wait for VW to confirm how it’s going to repair the millions of noncompliant TDI diesel cars still plying the world’s roads.