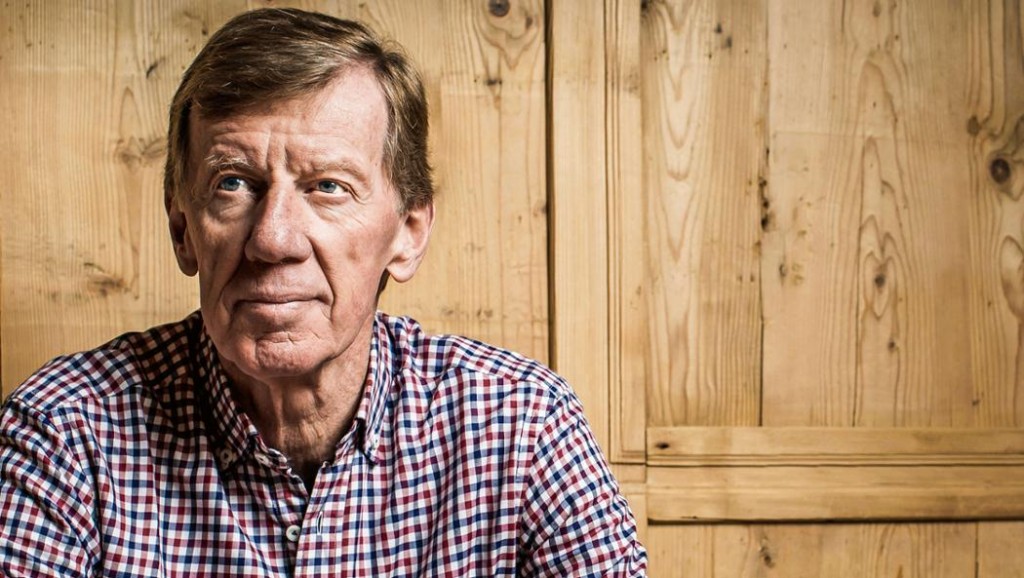 Walter Röhrl, the best rally racing driver of all time, turned seventy in March. Christophorus persuaded him to dig deep into his box of photographs and select seven special moments – felicitous encounters along with milestones in his career.

1. How it all started

I would never have become a professional rally driver without my friend and ski buddy Herbert Marecek. We were heading up into the mountains one day when he said to me, “The way you drive, you should really be entering rallies or road races.” I told him, “You’re crazy, who is supposed to pay for it?” He answered, “If I come up with a car and it doesn’t cost anything – would you drive it?” So I said, “Sure, if it’s free I’ll give it a try.” He found a few cars, including one from a friend and another that had been a test vehicle at a dealership. Herbert was an unending source of motivation. In 1970 he sold his father’s stocks for 15,000 Deutschmarks to buy an old Safari Porsche with 75,000 miles on it.We entered it in the Rally Bavaria, which was part of the European Championship. It was only my fifth rally, but we were way out in front until there was a breakdown. After each of the previous rallies Herbert had written to car journals saying, “My friend Walter is the best driver in the world – you have to get him a contract as a factory driver.” This time it worked. The editor-in-chief of Rallye Racing put us in touch with a carmaker, and I promptly won the next race in the European Rally Championship. That catapulted me straight into the twenty top-ranked drivers in the FIA. I quit my job with the Bishop of Regensburg and told my mother the good news: I’m going to be a rally driver!

2. Perfection on all tracks

Ah, skiing with Franz … We had a very intense relationship for a while because his manager Robert Schwan looked after me as well. Franz Beckenbauer persuaded me to join an illustrious group of fifteen men called the “Schneeforscher” (snow explorers) who went skiing together every year in Obertauern, Austria. Its members included Sepp Maier, Willi Holdorf, Max Lorenz, Uwe Seeler, and other prominent German athletes – some of whom were better at skiing, others not so much. There was a clause in my contract prohibiting skiing; any injuries and my salary would no longer have been paid. But I’ve never been interested in money. I’ve always loved to ski; in fact, before my rally time I was a state-approved ski instructor. I had the fourth-best results on the qualifying test and was appointed to the team of instructors for the German Skiing Association. People often used to say: “Röhrl is a speed junkie – fast slopes and fast cars.” But actually I’m leery of speed. What I’m interested in is perfection. I wanted to move as naturally on skis as on my own feet. And that’s also how I wanted to drive. I wanted the car to respond precisely the way I wanted, even to the slightest touch of my little finger. I could never be satisfied with anything less.

I discovered bike riding early on as an ideal form of fitness training, and it quickly turned into one of my great loves. From the mid-1980s to the mid-1990s, I covered about 5,000 to 6,000 milesa year on racing bikes. I did a lot of marathons with Kuno Meßmann, coach of the German national ski team, and also did a number of hill-climbing events on the Grossglockner. The record at the time on the Grossglockner, which was set as part of a tour through Austria, was fifty-six minutes and I managed to do it in just one hour and six minutes. But best of all were the bicycling holidays I took with Eddy Merckx in Italy and France. Every year we’d drum up a handful or two of fellow bicycle nuts, all of them former Tour de France contestants with one exception: me. We’d ride about sixty-five miles a day, at a leisurely pace in a group in the valleys. But whenever we came to a pass, it was all about attacking. I won the mountain sections three years in a row, with no one even close. I still do a lot of cycling these days – but now I prefer mountain bikes to road racers.

I never dreamed of becoming a world champion. But to win in Monte Carlo, the most iconic of rallies – to win just one time – was the greatest goal in my life. I often said if I won in Monte Carlo, I’d retire. I didn’t drive to make money. I just wanted to find out whether I was a dreamer – or truly the best. That was my motivation. A lot of the photos show me with a serious expression on my face after winning a race. That’s just part of my character – which tends toward melancholy rather than euphoria or jubilation. When I get out of the car at the finish, I’m satisfied if I’ve done my work perfectly. And that’s that. But when I won the Monte Carlo Rally in 1980, it was different. I was elated for three days straight. There was nothing in my life that could go wrong after that – I had accomplished everything that I had set out to do. And I actually did want to stop after that. My codriver Christian Geistdörfer said, “What’s going on? You’ve finally hit your stride and now you want to stop?” My wife was of the same opinion. “No way,” she said, “you love driving! If you stop you won’t know what to do with yourself.” Yes, I wanted to enter rallies, but I didn’t want all the commotion focused on me. But I realized that was unavoidable and just told myself to keep going. Which was the right thing to do.

The San Remo Rally in Tuscany was one of my favorites, along with Monte Carlo and New Zealand. In 1981 I didn’t yet have a contract with Porsche. Instead I was with another carmaker, which was having financial troubles. So I drove a Porsche 924 in rallies for the German Championship. Porsche then proposed that I drive a 911 in San Remo. I really wanted to win that rally, because I hoped that a victory would convince Porsche to enter factory cars in rallies. The course in San Remo started off on asphalt, and I led straight away. Then there were two days off-road in Tuscany. Cars with all-wheel drive were faster on that, of course. We had calculated that if the all-wheel vehicles weren’t more than four minutes ahead after these two days, we’d still pull it off because there was another night to go on asphalt. After the last off-road stage we were only behind by two minutes and ten seconds. So everything looked great – until a semi-axle broke off. That was the most bitter breakdown in my entire career. It hit me so hard that I was sick for the next four weeks.

Herbert von Karajan, the world-famous conductor, loved cars. He really wanted to meet me. Ferdinand Piëch arranged for him to contact me, and I drove to his  place in Anif, near Salzburg. The maestro greeted me by asking, “Do you know why I want to drive with you?” I said, “Well, probably because you know Mr. Piëch and because you and I have the same car.” “No, no,” he said. “Listen, I have a sailing yacht, a Swan. It’s the best you can buy. And my plane is a twin-engine Falcon, the best aircraft of its type. I always want only the best. And that’s why I’d like to drive with you.” We set off from Anif toward Hallein in the Tennen Mountains. After a while Karajan suddenly said, “I’ve seen videos of you braking with your left foot. How do you do that, can you show me?” I told him that “in order to do that we have to drive at the limit of what’s physically possible, which means really fast.” Karajan responded, “There’s no traffic, so why don’t you drive fast. When we come to a left-hand curve, I’ll tell you if anything’s coming.” And then he actually leaned way over the dashboard to the front windshield before left-hand curves, and yelled each time, “All clear, all clear!” And when it was over he said, “I’ll practice a little and then give you another call.” So I visited him over the next two years. Driving made him so happy. And he promised me, “None of my concerts will ever be sold out for you. And my plane will always be available to take you there.” That was a very touching offer, but I could never take him up on it. My schedule at the time was simply too full.

After I stopped entering rallies in 1987, I used to fill in every once in a while at road races for Hans-Joachim Stuck when he couldn’t make it. One of those times was the Trans-Am race at the Niagara Falls circuit in 1988. It was a bumpy city course with concrete walls, which meant not an inch of extra space. That’s fatal for road racers, because without a run-off zone they don’t dare to push the limits. As rally drivers, however, we were used to that. In training I posted the best time by 2.6 seconds. The Americans said, “Pure luck! Did you see that? He was just a hand’s-breadth away from hitting the wall. He won’t last five laps tomorrow!” The next day it was more than 104 degrees Fahrenheit with one hundred percent humidity. The race took a good three hours and I lapped the entire field, including the second-place finisher Scott Pruett. They had allunderestimated the precision you need in rally driving. That was my kind of race.

Born in the German city of Regensburg on March 7, 1947, the rally driver is one of the most outstanding personalities in racing history. Over the course of his professional career from 1973 to 1987, he won two FIA drivers’ world championship titles (1980 and 1984), one European Rally Championship title (1974), fourteen world championship races, and four Monte Carlo Rally titles. The first car he ever owned, which he bought at the age of twenty-one, was a Porsche 356. Since 1993 he has been an active test-driver and representative for Porsche. He played a key role in developing the Porsche Carrera GT. The youngest of three children, Röhrl was raised by his mother after his parents separated. An observant Catholic, he began a commercial apprenticeship with the Diocese of Regensburg at the age of sixteen. At eighteen he became the chauffeur for an administrative official and clocked 75,000 miles a year. He married his wife Monika in 1978 and lives with her in Sankt Englmar. Despite his success, Röhrl has remained modest. “I don’t need a helicopter, a yacht, or a house in Florida,” he says. “I’m happy with a racing bike, a ride through the Bavarian Forest, and ten euros for a snack.”

In honor of Walter Röhrl’s seventieth birthday, the Porsche Museum in Zuffenhausen will be exhibiting some of his cars as well as rally simulations as part of a special presentation from March 14 through May 14, 2017.