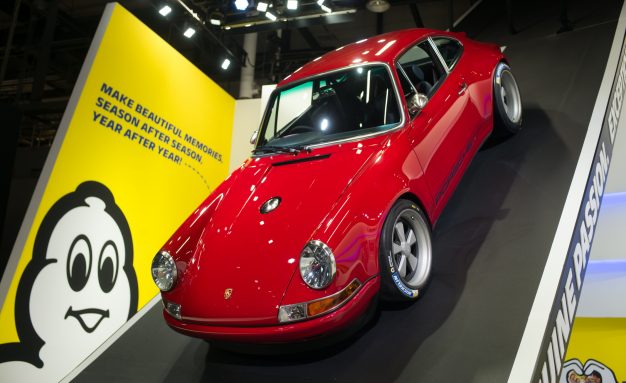 To add a modicum of visual pep at their Detroit auto show display, Michelin brought out a pair of the latest Porsche 911s, reconstructed by Singer Vehicle Design, the California workshop founded by former Catherine Wheel frontman Rob Dickinson. If pressed, you might find one C/D staffer willing to admit that a Singer-built car is the most gratifying automobile he’s ever driven; it’s the rare sort of machine that cashes the checks that its aesthetics implicitly promise. The rest of us are just as happy to stare and drool at Dickinson’s interpretation of Butzi Porsche’s vision. 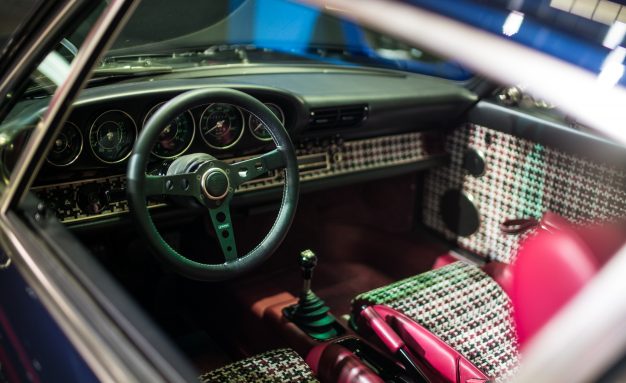 Singer emptied its full bag of tricks into the 964-based cars, including Ed Pink–built 4.0-liter flat-sixes and full Öhlins suspension setups. Of the pair, the red car—known as the London Commission—is the racier of the two, with a pair of carbon-fiber buckets wrapped in blue leather. Regrettably, since the car was suspended above the floor, we didn’t get a great look at the interior. The RSR-finished wheels wearing Michelin Pilot competition slicks, however, were right around eye level, and we’ve been known to stare at those longer and more longingly than is probably appropriate. 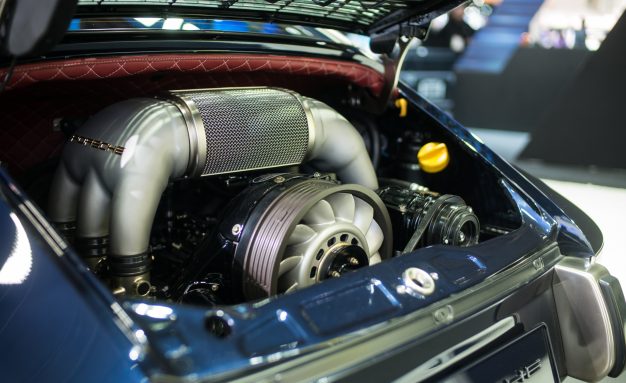 The blue car’s interior is what we might deem “rad on rad,” had we a propensity to deem stuff “rad on rad.” Woven leather interiors are nothing new to Singer Vehicle Design’s cars—the pattern echoes the classic basketweave material used on early 911s. But lately, they’ve opted to amp it up a notch, making use of colored strips to create patterns. The multicolor 8-bit houndstooth effect is startling, sharp-looking, and totally appropriate to the car. Dubbed the Monaco Commission, the blue machine wears Pilot Sport PS2 rubber, and only the driver’s seat is a track-oriented carbon-fiber shell. The passenger luxuriates in a four-way-adjustable power seat.

Give us a choice between the two, and we’d tear out more than a few hairs before ultimately opting for the blue one, and that’s largely on the strength of its magnificent interior. That said, we’d be leaving the red car behind, and that feels like more than a minor travesty.