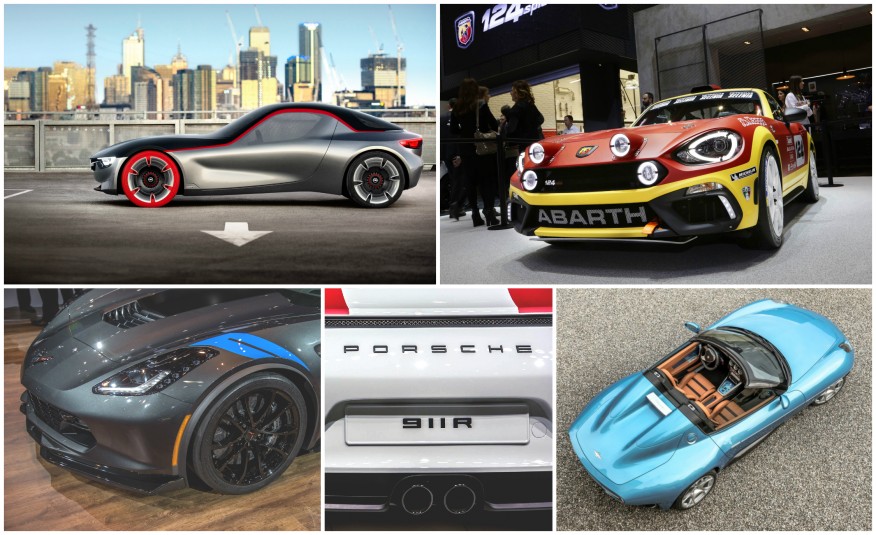 Not counting the cars—and vaporware—displayed by numerous tuners and aftermarket companies at the 2016 Geneva auto show, we counted nearly 30 sports cars and performance-oriented machines. That’s a lot of sportiness and, as the Germans say, dynamism for a single auto show. The volume also justifies our sorting through the masses of hot cars to find the very hottest sporting rides from the show floor. Predictably, this list is a bit long, but we’ll be damned if it doesn’t warm your heart. 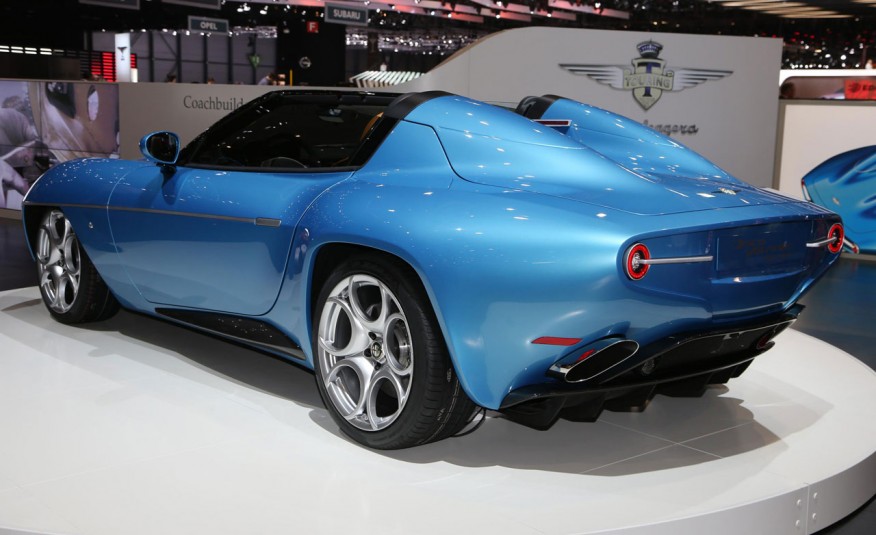 Forget Panic! At the Disco. Get outta that Disco Inferno. Leave behind that fond, fuzzy memory of making out with Cherie Currie at Rodney Binghenheimer’s English Disco. Instead, welcome yet another iteration of Touring Superleggera’s take on its venerable Alfa Romeo 1900 C52 Disco Volante of the early 1950s. This time inspired by the open Spider variants of the ultra-rare, very famous ’50s Discos, Touring is introducing a run of seven Alfa Romeo 8C–based Disco Volante Spyders. READ MORE ›› 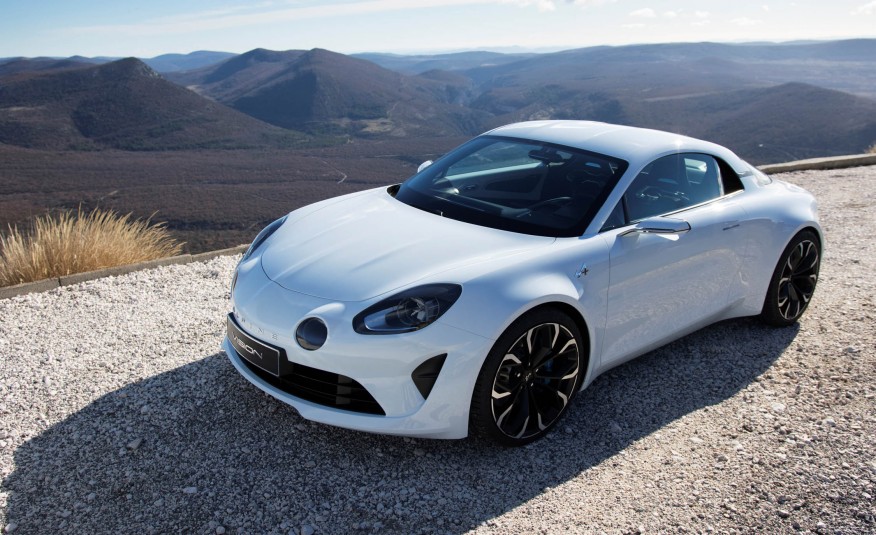 France has given the world many things, with the list of achievements including cheeses that smell like crime scenes, revolutionary politics, and—perhaps most important—jokes about the French. Here’s something else that might be worthy of the list of significant Gallic accomplishments: a thinly disguised look at the new Alpine sports car, set to be launched in Europe next year. READ MORE ››

We start with the bad news: As previously reported, Aston Martin’s glorious-sounding naturally aspirated V-12 engine won’t be making the transition to the new DB11. The engine that has powered all of the company’s larger products since 2003, and was essentially two Ford Duratec V-6s joined at the crank, is soon to be retired and we will not hear its heavenly wail again. Black armbands will be issued. READ MORE ››

With the Bugatti Veyron’s top-speed records, a price tag over $1 million, and distinctive melted-scoop-of-ice-cream styling, it was an instant rolling superlative when it debuted in 2005. Its successor, the new Chiron, is even more of a record- and headline-grabbing show pony. Is it faster? A 310-mph (500 km/h) speedometer and Bugatti’s claim that it’ll do 261 mph say it is. READ MORE ››

The original Corvette Grand Sports stalked racetracks in the 1960s, but the name went dormant until it was revived in 1996 for the final year of the C4-generation Corvette. With a 30-hp bump over stock and the wider wheels and tires of the mighty ZR-1—and the bulging fenders to match—that Grand Sport also sported a pair of fender hash stripes like those on the original race car, and it established the blueprint for production Grand Sport models going forward. For 2010, Chevrolet created another Grand Sport around the sixth-generation Corvette using the suspension and wider rolling stock from the Z06. And now the seventh-generation Corvette gains a Grand Sport option this summer for the 2017 model year. READ MORE ››

As a general exercise, Fiat’s new 124 Spider is at its core a retro effort. The original 124 Spider first went on sale in the late 1960s and enjoyed a relatively successful production run that lasted well over a decade. The new 124 Spider apes many of the old car’s styling cues, wrapping the Italianate look around the fourth-generation Mazda MX-5 Miata’s basic structure, albeit with a turbocharged Fiat engine under the hood. So it should come as no surprise that, when it came time to design a higher-performance Abarth 124, Fiat once again mined its history for inspiration. READ MORE ››

Threatening to sap some wind from the Fiat 124 Spider–based Abarth 124 Spider roadster at its big debut in Geneva is—believe it or not—another Abarth Spider, a much, much cooler one. The only caveat is that you can’t buy it, at least, unless you’re keen on taking it rallying in the FIA’s R-GT class during the 2017 season. Stealing the show is the 124 Rally, a purpose-built race car that Fiat and its Abarth performance arm will begin selling to racers shortly after the 2016 Geneva auto show wraps up. READ MORE ››

The Jaguar F-type R already is a pretty menacing machine, and come this summer, anyone with a driver’s license will be able to blast out of the showroom in an even faster, 200-mph version. Our only advice to the fortunate, crazy folks who find their names on the title to a new 2017 F-type SVR: The brake pedal is on the left, and maybe hold off on pressing that console button with the squiggly lines behind the car, at least for a while. READ MORE ››

When normal people die, they are remembered in framed photographs or personal anecdotes told by their loved ones. Pillars of the community might get their name on a street or a ball field, but for most of us, that’s where our legacy stops. But if you’re a dead Italian tractor-builder-cum-supercar-constructor named Ferruccio Lamborghini, who would have turned 100 this year, your tribute comes in the form of the car you see here: the spectacular, 217-mph Lamborghini Centenario, which also marks the 50th anniversary of the debut of the stunning Miura. READ MORE ››

Here’s one we definitely saw coming. We’ve been telling you that McLaren was planning to launch a grand touring model within its Sports Series lineup since before we knew that the Sports Series name was even a thing, and now McLaren has finally confirmed the GT’s imminent arrival. The 570GT is set to serve as the sensible sister to the 570S coupe and also the upcoming Sports Series spider, with a retuned suspension and more luggage space. READ MORE ››

Opel’s tease for its GT sports car concept has come to a close. The small coupe has been shorn of all mystery, ahead of its debut at the 2016 Geneva auto show. Yet, as one door closes, another one opens: We absolutely want this car to be built. It’s lightweight, turbocharged, and looks phenomenal. Not merely rear-wheel drive, it’s a proper sports car, a two-seater that appears poised to chase Mazda’s MX-5 Miata and the BRZ/FR-S twins from Subaru and Scion. READ MORE ››

Pagani hasn’t made a rational car yet, and the Huayra BC does little to change that fact. Adhering to the same “better performance through a cost-is-no-object blend of passion and technology” approach that it applies to all of its creations, the Huayra BC is Pagani’s most powerful road car to date. Lighter and more powerful than the original Huayra, the BC represents Pagani’s goal of creating the lightest globally homologated hypercar on the market today. The “BC” suffix honors the late Benny Caiolo, a car enthusiast and friend of Horacio Pagani who purchased the builder’s first automobile. READ MORE ››

Rumors flew for years that Porsche’s Boxster and Cayman would get turbocharged four-cylinder power at some point in the future. And to place the cars in line with the brand’s historic mid-engined, four-cylinder racing machines, Zuffenhausen announced late last year that the new cars henceforth would be known as the 718 Boxster and 718 Cayman. And furthermore, that the cars would switch places in the company’s lineup, with the hardtop Cayman anchoring the bottom end of Porsche’s sports-car range, while the convertible Boxster would command a price premium. We now know the price of the Boxster—although not yet its premium, since the figures for the 718 Cayman are not yet out. The base 718 Boxster will start at $57,050, while the Boxster S will begin at $69,450. That’s an increase of $3900 and $4500 over the previous car. The new version arrives in June. READ MORE ››

Despondent over Porsche’s migration with the rest of the auto world to boosted engines and automatic transmissions? Behold this ray of sunshine: Porsche has a new 911 R that combines just what you want/need—a hot naturally aspirated engine, six shift-’em-yourself gears, and a clutch pedal all in one tantalizing package. READ MORE ››