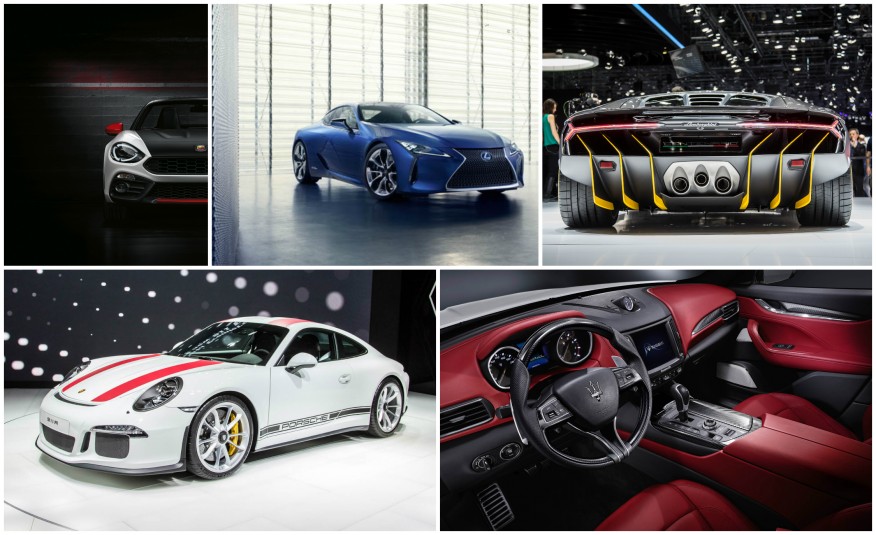 Certainly, this year’s Geneva show offered a veritable parade of multimillion-dollar automotive pornography, from the new Bugatti Chiron to Pagani’s Huayra BC, but there were plenty of highly anticipated “normal” cars there, too. There were even a few cars that will be sold in the U.S., including Chevrolet’s Corvette Grand Sport, the Volvo V90 station wagon (yes, a real wagon is headed to our shores!), the Hyundai Ioniq hybrid/plug-in hybrid/EV triple threat, to name a few. So get excited, toast some Brüt—or, if that’s not an option, some sparkling grape juice—and soak in the show’s must-see rides:

We start with the bad news: As previously reported, Aston Martin’s glorious-sounding naturally aspirated V-12 engine won’t be making the transition to the new DB11. The engine that has powered all of the company’s larger products since 2003, and was essentially two Ford Duratec V-6s joined at the crank, is soon to be retired and we will not hear its heavenly wail again. Black armbands will be issued. READ MORE ››

Key Audi rivals BMW, Mercedes-Benz, and even Lexus have flooded the market with every conceivable size and shape of crossover SUV over the past decade or so. Yet the four-ringed brand from Ingolstadt has plugged along with just three such models: the Q3, Q5, and Q7. All three have been success stories, sure, but profit-laden variations and entries in other size classes have been conspicuous by their absence. Enter the Q2, which begins the rapid expansion of Audi’s SUV lineup. READ MORE ››

With the Bugatti Veyron’s top-speed records, a price tag over $1 million, and distinctive melted-scoop-of-ice-cream styling, it was an instant rolling superlative when it debuted in 2005. Its successor, the new Chiron, is even more of a record- and headline-grabbing show pony. Is it faster? A 310-mph (500 km/h) speedometer and Bugatti’s claim that it’ll do 261 mph say it is. READ MORE ››

The original Corvette Grand Sports stalked racetracks in the 1960s, but the name went dormant until it was revived in 1996 for the final year of the C4-generation Corvette. With a 30-hp bump over stock and the wider wheels and tires of the mighty ZR-1—and the bulging fenders to match—that Grand Sport also sported a pair of fender hash stripes like those on the original race car, and it established the blueprint for production Grand Sport models going forward. For 2010, Chevrolet created another Grand Sport around the sixth-generation Corvette using the suspension and wider rolling stock from the Z06. And now the seventh-generation Corvette gains a Grand Sport option this summer for the 2017 model year. READ MORE ››

When Ferrari’s FF made its debut for 2012, the model broke new ground by being the first Ferrari with four-wheel drive. (The four-wheel-drive system and the car’s four-place layout led to the “FF” designation.) The newly unveiled follow-up version adds four-wheel steering to the mix, but rather than adding a third “F” to the model name, Ferrari switched to the more evocative GTC4Lusso. READ MORE ››

As a general exercise, Fiat’s new 124 Spider is at its core a retro effort. The original 124 Spider first went on sale in the late 1960s and enjoyed a relatively successful production run that lasted well over a decade. The new 124 Spider apes many of the old car’s styling cues, wrapping the Italianate look around the fourth-generation Mazda MX-5 Miata’s basic structure, albeit with a turbocharged Fiat engine under the hood. So it should come as no surprise that, when it came time to design a higher-performance Abarth 124, Fiat once again mined its history for inspiration. READ MORE ››

Honda has now rolled out the hatchback version of its all-new Civic at the Geneva show—and even though the model was introduced on the Continent, this is a debut that has plenty of relevance to America. READ MORE ››

As the debate over the relative merits of different hybrid technologies and pure-electric powertrains continue to simmer if not quite rage, Hyundai offers a compellingly simple solution: sell them all. READ MORE ››

The Jaguar F-type R already is a pretty menacing machine, and come this summer, anyone with a driver’s license will be able to blast out of the showroom in an even faster, 200-mph version. Our only advice to the fortunate, crazy folks who find their names on the title to a new 2017 F-type SVR: The brake pedal is on the left, and maybe hold off on pressing that console button with the squiggly lines behind the car, at least for a while. READ MORE ››

When normal people die, they are remembered in framed photographs or personal anecdotes told by their loved ones. Pillars of the community might get their name on a street or a ball field, but for most of us, that’s where our legacy stops. But if you’re a dead Italian tractor-builder-cum-supercar-constructor named Ferruccio Lamborghini, who would have turned 100 this year, your tribute comes in the form of the car you see here: the spectacular, 217-mph Lamborghini Centenario, which also marks the 50th anniversary of the debut of the stunning Miura. READ MORE ››

Like it or not, the long-term future of cars almost definitely doesn’t involve the internal combustion of fossil fuels. Toyota is keenly aware of this truth, and that’s why the brand is readying a fuel-cell car for its premium Lexus brand by 2020. But that model won’t represent Toyota’s first major foray into hydrogen-fuel-cell powered vehicles, as the brand became the first to offer a fuel-cell car for direct purchase last year, in the form of the, er, aesthetically challenged Mirai. But before fuel-cell-powered and battery-electric vehicles rule the autonomous roads of the future, the interim will be filled with lots and lots of hybrids. READ MORE ››

Maserati named its first-ever SUV, the Levante, after a warm Mediterranean wind that “can change from a light breeze to an irresistible natural force in an instant.” Now that warm wind has blown all the way from Italy to the 2016 Geneva auto show, where we’re finally getting our first in-person look at the Levante. Maserati also released full product information, and after taking a look at the specs, our hopes have been raised. READ MORE ››

Daimler’s Mercedes-AMG performance division is expanding—by taking over the former AMG Sport models and turning them into full-fledged AMGs. The change was ushered in by the Mercedes-AMG SLC43 and Mercedes-AMG C43 sedan. The C43 coupe is of course the sister model to the latter car (which was launched as the C450 AMG), and the two are virtually identical in content. READ MORE ››

Mercedes-Benz has long enjoyed a healthy reputation for quality, comfort, and solidity, but it is once again making cars that are beautiful, too. The latest in the company’s string of handsome designs is the all-new C-class cabriolet, which may be among the most attractive vehicles on the star-studded floor at the 2016 Geneva show, where it makes its debut. READ MORE ››

Despondent over Porsche’s migration with the rest of the auto world to boosted engines and automatic transmissions? Behold this ray of sunshine: Porsche has a new 911 R that combines just what you want/need—a hot naturally aspirated engine, six shift-’em-yourself gears, and a clutch pedal all in one tantalizing package. READ MORE ››

Mild-mannered Subaru has been on something of a concept-car bender lately, first busting out the Impreza 5-door hatch concept last October, which was quickly followed the next month by a sedan counterpart, the aptly named Impreza sedan concept. The latest concept to see the light of day is the Subaru XV, a thinly veiled peek at the upcoming 2017 Subaru XV Crosstrek. Introduced in the U.S. as a 2013 model, the XV Crosstrek is basically a lifted version of the Impreza hatchback, so it makes sense that this XV concept would debut so soon after the other Impreza show properties. READ MORE ››

If the exploding subcompact-crossover segment were a party, Toyota would only now be showing up with a Black Eyed Peas CD and a sixer of Smirnoff Ice in hand well after everyone else has passed out. That’s how late Toyota is to this shindig. Kia kicked off the party in 2009 with the boxy, front-drive Soul and a horde of party-boy hamsters. During the introduction of the 2017 Toyota C-HR at the 2016 Geneva auto show, the Japanese automaker acknowledged that it was playing catch-up, but made it clear that it’s determined to be the life of the party regardless. Toyota hopes it can stand out from the crowd of sober alternatives with a wild design that invites only one comparison—to the equally outgoing Nissan Juke. READ MORE ››

If you’re thinking that the one thing the world needs least right now is a convertible crossover, you have plenty of company. But there are enough people interested in the idea that Land Rover is going there with its handsome and pricey Range Rover Evoque convertible. And now Volkswagen is showing us something remarkably similar in the form of the T-Cross Breeze. It’s technically a concept, but VW says it “can well imagine putting such a convertible on the market as a production model.” Of course, it’ll morph into something far more practical first, a fixed-roof subcompact crossover to tussle with the likes of the Honda HR-V, Mazda CX-3, and Jeep Renegade. READ MORE ››