To be sure we have your preferred e-mail address, please click HERE  to send SDR a “Here is my latest e-mail address” email (please don’t forget to hit “Send”) and you will be added to the SDR e-mail distribution list.

Last week I was speaking to Lana Gill, our membership chair, and she informed me that she had been talking to the team at Porsche Carlsbad and that they had mentioned that they could arrange for a Porsche Taycan to be at the “Cars and SDR” event the coming Sunday (January 26th). As soon as I had confirmed that this was the case, I spoke with our communications team and asked to get an e-mail message out to inform club members who might be interested in seeing it.

Early Sunday morning as I drove up to the “Cars and SDR” I was thinking about the legendary pastries at Jessie’s Bake Shop where this monthly event is held. When I arrived, there were already a dozen or so Porsches whose owners had braved the somewhat gloomy skies to bring out their cars. Within 15 minutes of my arrival, Seper Rasti from Porsche Carlsbad stealthily sneaked the Taycan into the lot and silently parked front-and-center outside Jessie’s. 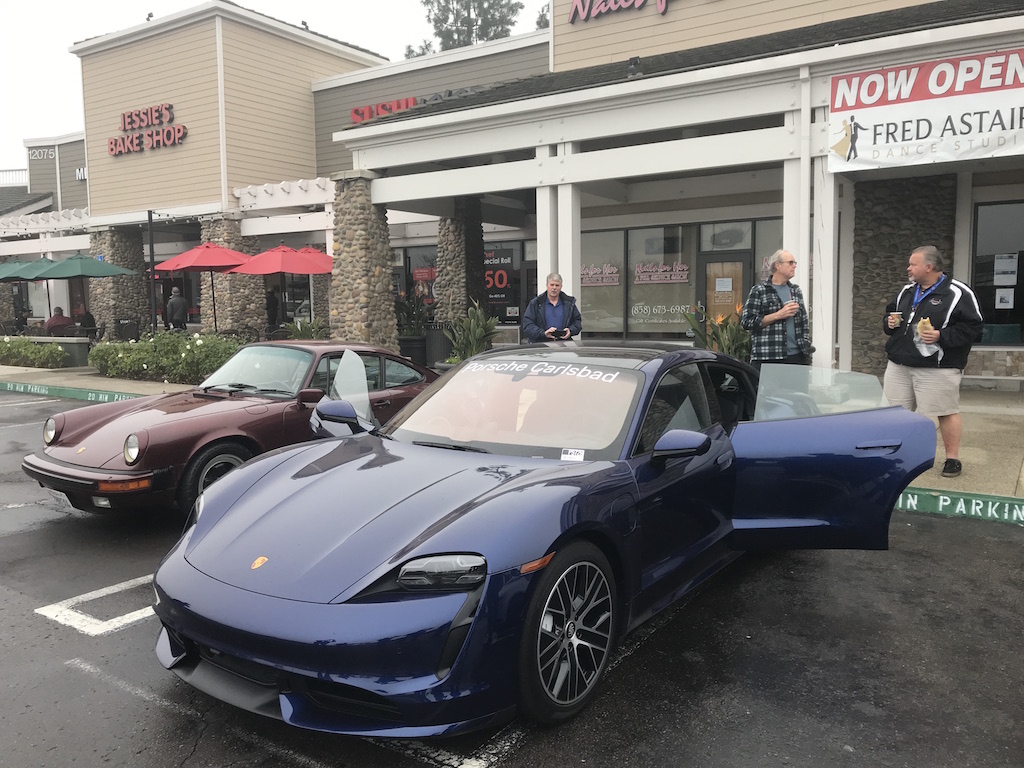 My first impression was that it is a reasonably large car – as in fairly long and quite wide, as can be seen in the attached photos, but it was lower than I had expected. I am told it is roughly the same size as a Panamera, however it certainly looked more sporty and purposeful. The example Seper had brought down was a beautiful deep-blue Taycan Turbo, and as I had seen many Internet test articles and read plenty of motor magazines about the car, I knew what to expect. Even so it impressed me with its straightforward simplicity. It is, without a doubt, a true Porsche in that it has many of the traits now common amongst the newer models – things like the quad front lights, the chiseled front end – that speaks of channeling the air around the car to cool the electric drive system, and the now familiar Porsche full-width rear light. 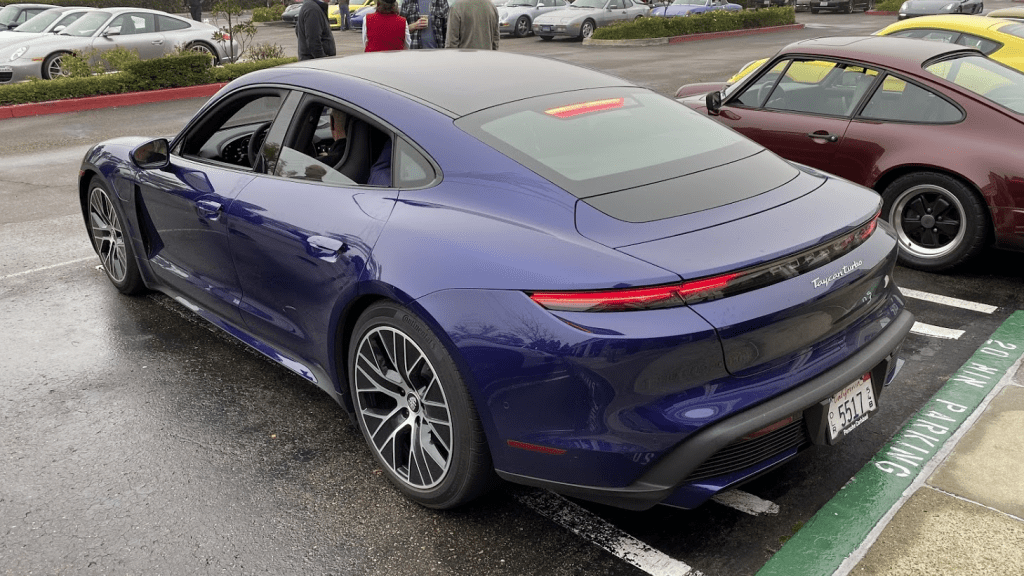 It was almost as if every one of the last few models Porsche has created prepared the viewer for this new but somehow familiar model. In some strange way, it seemed to command respect even when resting casually at the curb, reminding me of a thoroughbred racehorse turned out in a respectable paddock of refined quarter horses. It definitely garnered the attention of the many Porsche owners present, and sure enough, within a few minutes, as if by magic, the parking lot filled with over 50 Porsches.

The car was soon surrounded by enthusiasts who marveled at its overall shape and stance, opening every door, trunk, hatch, and photographing every aspect of this curious new beast. I decided to take a few moments to get a coffee and some of the amazing pastries that Jessie had to offer while listening to the chatter of people asking the driver all kinds of questions about the car – specifically, the driving feel, performance and handling and of course, the much heralded acceleration.

Then Seper, the fellow who had brought the car down from Porsche Carlsbad, asked a very pointed question…would anyone like to go for a ride to see how it felt on the road?

People seemed stunned at first but pretty soon rushed to take him up on his offer. With three passengers, he drove very sedately out of the parking lot and disappeared for a while, leaving the majority of us somewhat dumbfounded, not unlike after a concert when the band stops playing and the lights come on. We all talked of what we liked about it and what was the most surprising part of the whole experience while anxiously awaiting its return, hoping that he might be prepared to take a few more for a test drive. Not too long later, the Taycan returned with its inhabitants each wearing a huge grin, and sure enough, they all sang the praises of the remarkable acceleration during launch control. 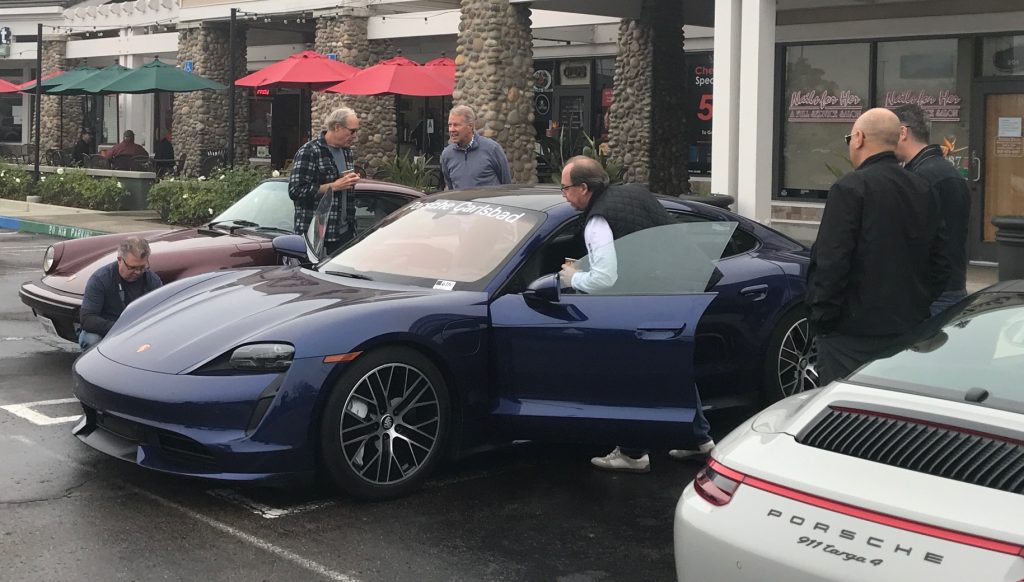 They poked, they prodded and they took pictures.

After a few more test drives, I managed to get in the passenger seat, and with a couple of others in the back, we went for the ten to fifteen minute drive around the wide, straight, dual carriageways of Carmel Valley. At low speed, it was impossible to tell that this car weighed over 5,000 pounds. It seemed fairly stiffly sprung, indeed the ride was nowhere near as cushioned as one might expect of a luxury vehicle, and it seemed remarkably nimble and light on its toes for a car its size.

The interior was clean and uncluttered, and Seper explained that the instrument panel could be configured to the driver’s tastes, as it was completely electronic and therefore fully customizable. He did say that he liked the computer-generated sport sound that it made, and that it definitely added to the pleasure of the ride.

Then we came to a red stoplight, and as we waited for it to change, Seper prepared the car for a launch control start; he ensured the car was in sport mode and checked the surrounding traffic (which although present, was very light).

He broke the silence by asking if we were ready. While not exactly insulted, I definitely felt like rolling my eyes and saying “just bring it on!” However, I stayed quiet…at first. Then the light changed and the car rocketed forward so quickly that for the next two or three seconds my breath was taken away, and all four of us felt the most amazing rush that was almost scary. There was one long, continuous, relentless pull, not unlike the fastest roller coaster you have ever been on. We were all pinned in our seats watching the road ahead rushing towards us at an ever-increasing rate. Then, very calmly, Seper gently brought the car back down to orderly speeds, and more than one of us let out an exclamation of surprise. I don’t recall my exact comment, it might have been “golly” but I don’t think so. Suddenly we were all laughing and jabbering like monkeys at what we had just experienced.

At this point …two words came to mind, and they were Respect (capital “R”) and gratitude. 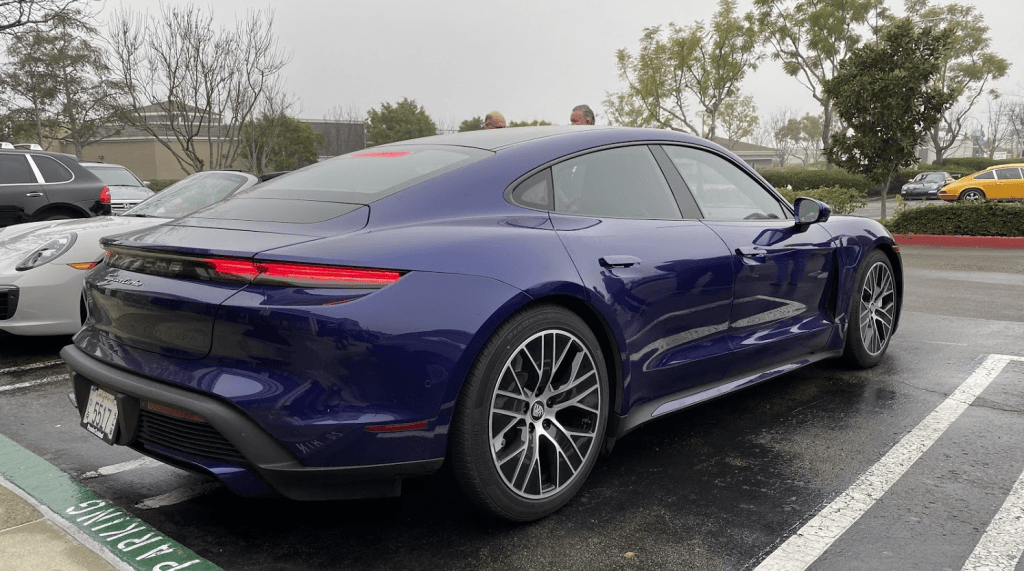 The Porsche profile was accentuated by the clean lines.

I concluded that the limits of acceleration were clearly no longer vehicle capability. The car could handle this kind of performance all day without fuss. The performance limiter was now the human being. I would imagine that it would take quite a bit of getting used to – not that any driver would launch control away from every stoplight, but even so, having that crisp acceleration and handling available at any time would make the driver think that everyone else on the road was barely awake.

I envision Taycan drivers everywhere shaking their heads in dismay at the pace of most other drivers, most of the time. It would probably be a good idea to get in the habit of warning passengers before they used anything more than a small amount of the car’s acceleration because that kind of performance could be alarming if not expected.

I owned my first Porsche when I was 25 years old (which is now over 35 years ago) and I’ve owned a total of four, so I guess that makes me both a die-hard Porsche fan and an old timer.

I am aware of a little known Porsche fan phenomenon known as NMD, which is New Model Disappointment. Back in the really olden days, when Porsche only made 356s, a new model came out which was assigned the model number 901 (soon to be changed to 911). Porsche fans at the time were outraged. There were even tee-shirts that said “OK, so Porsche made cars after 1964…but who cares!”

It seemed that every time Porsche introduced a new street model, the die-hards complained that it was not as good as the previous version. I vividly recall that when the 964 was introduced, I didn’t like it. Initially I thought the styling was sadly lacking, and although it was faster and more powerful than its predecessor, it was too expensive. When the 993 came out, I was not impressed and consequently bought a 964. The new 996 styling originally didn’t sit well with me when compared to the old 993, which, by then, I was totally used to. The 997 proved beyond doubt that the company had lost their way and was turning from building lightweight, nimble sports cars to producing heavier luxury GT cars – which, I’ll give you, may have been faster and more powerful, but were much bigger and far more expensive. 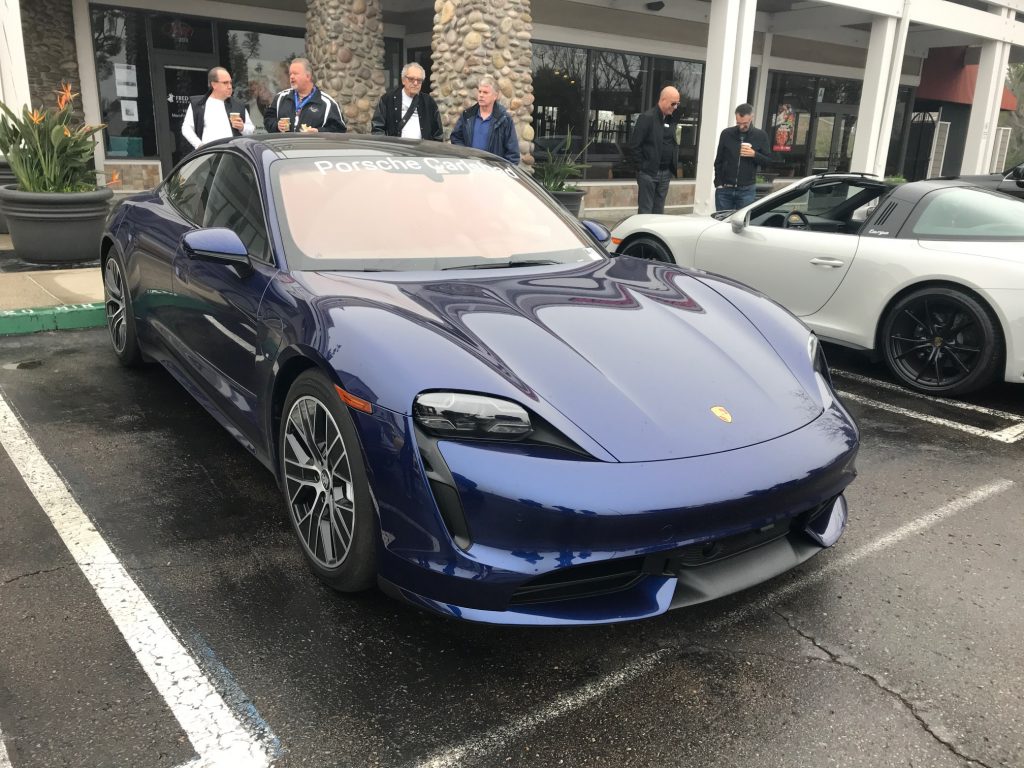 Suffice to say I can see how the Porsche company marketing types might believe that Porsche fan NMD is a thing. With the exception of a few limited edition supercars like the twin-turbocharged AWD 959, the 5.7 liter V10 Carrera GT, or the legendary 4.6 liter V8 918 Spyder (all of which were, to my mind, dalliances into automotive fantasy), I can honestly say the first production Porsche model that has been a step change to something new, that meets with my full approval…is the Taycan.

So if any of this resonates with you, go and talk to your local Porsche dealer and find out what this is all about. I was assured that the team at Porsche Carlsbad would be delighted to take your order and help you get into Taycan ownership.

Many thanks to Seper for taking us out for a test drive, and to all at Porsche Carlsbad for permitting the car to be brought out for us all to examine and for some to experience. I rounded off a truly amazing Sunday morning with one of Jessie’s legendary cherry turnovers, followed by a leisurely drive home in my seemingly pedestrian 911.

Yet another great event that makes me proud to say…We are SDR !!

To be sure that we have your preferred e-mail address on record please click HERE  to send SDR a “Here is my latest e-mail address” (please don’t forget to hit “Send”) and we’ll be sure you are added to the SDR distribution list.