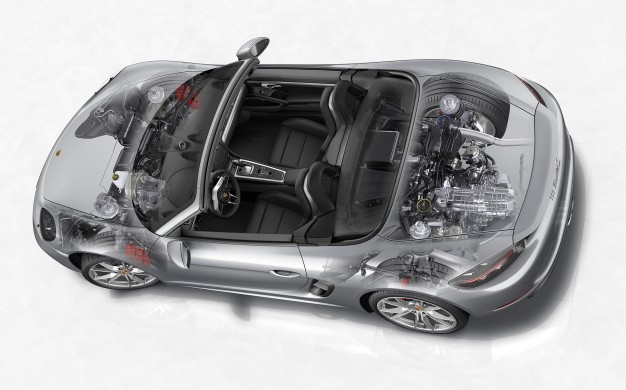 If Porsche’s turbocharged 911 Carrera and 911 Carrera S offend your natural-aspiration sensibilities, we have bad news: The brand’s mid-engine sports cars, the 718 Boxster and the upcoming 718 Cayman, are going turbo, too. Now for the good news. As we found to be the case in the turbocharged 911 Carrera, the Boxster’s transition to forced induction—along with a reduction in cylinder count—needn’t be accompanied by tears and tantrums. Based on the spec sheet alone, power and fuel economy are up, weight has been held in check, and the new turbocharged 2.0- and 2.5-liter fours in the Boxster and Boxster S can rev to an un-turbo-like 7500 rpm. None of this comes as much of a surprise, as the Boxster’s flat-four engines are derived directly from the turbocharged 3.0-liter flat-six in the 911. 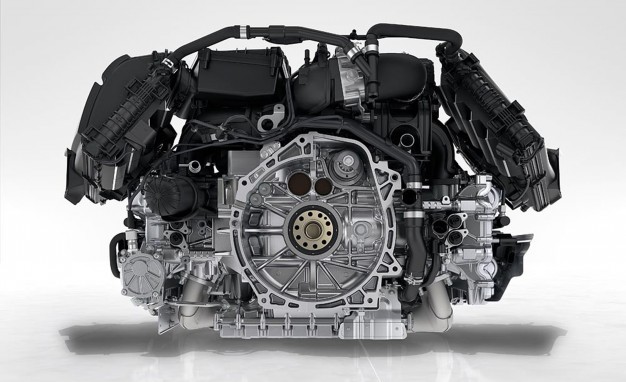 When Six is Good, Borrow It for Four

Of course, the biggest open question among enthusiasts is how the 718 Boxster’s four-cylinders will fill the emotional void created by the departure of the old model’s flat-six engines. Porsche is not a company known for underdoing things, and it devoted considerable effort to ensuring the new flat-four engines live up to the brand’s sporty image. Its hand forced by tightening fuel-economy requirements, Porsche nonetheless took the opportunity to enhance the Boxster’s drivability with greater engine torque. Toward those ends, lopping two cylinders off of the 911’s turbo flat-six is a good start. The two flat-fours are really a single engine, the larger, more powerful 2.5-liter differing only by way of a larger cylinder bore and a different turbocharger. Dubbed the “B4,” the flat-fours are nearly identical to the 911’s new twin-turbo flat-six (“B6″), only with a single turbocharger nestled into the space occupied by the two forward cylinders on the six and a lower 9.5:1 compression ratio. The base 2.0-liter flat-four even shares its 91-mm bore and 76.4-mm stroke with the 3.0-liter flat-six, although its pistons are slightly taller. The 2.5-liter’s bore measures 102 mm, making that engine more oversquare. Parts common to the two fours and Porsche’s six include the alternator, HVAC compressor, main bearings, fuel injectors, fuel pump, vacuum pump, camshaft bearings, intake valves (on the 2.0L, the 2.5L uses larger-diameter valves), camshaft-phasing mechanism, connecting rods, piston rings, and timing chain. The four’s split crankcase uses the same alloy and casting method as the six, and the same mechanically grooved cylinders to which an iron lining is applied using a plasma-spraying process. The heads use the same centralized fuel-injector position introduced on the flat-six (the injector is now aligned with the spark plug, instead of being on the side of the head), for better fuel atomization and less cylinder-wall wetting, as well as the same high-pressure fuel pump capable of pushing fuel at 3625 psi.

So, it’s the same basic engine—time to go home, nothing to see here, right? Not exactly. Unlike the old Boxster’s flat-sixes (and the new 911’s engine), which use a single forward engine mount and rely on the transmission’s dual mounts at the rear, the flat-fours boast two mounts, one on either side of the engine (in addition to two transmission mounts) to leave room for each head’s exhaust to meet together at the turbo. Every Boxster now uses vacuum-operated variable engine mounts that loosen at idle for better isolation (instead of a static mount), while cars equipped with the Sport Chrono package utilize dynamic magnetorheological hydraulic transmission mounts in place of the stock fluid-filled pieces.

Also unlike the 911’s flat-six, the flat-four’s VarioCam Plus valvetrain has variable exhaust-valve lift in addition to intake-valve lift, as well as the aforementioned cam phasing. The exhaust valves use selectable concentric lifters, as on the intake side. With fewer cylinders to lubricate, the flat-four’s oil pump offers two pressure levels, one fewer than the six’s pump, and is 3.7 pounds lighter than before. 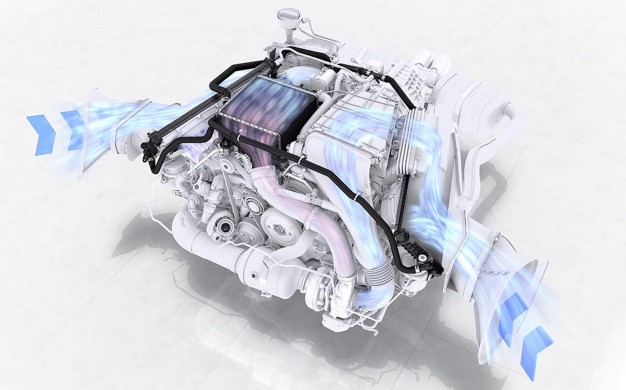 Porsche cools the turbo four’s intake charge using an air-to-liquid intercooler mounted on top of the engine, as opposed to dual air-to-air intercoolers employed on the 911. Coolant, sourced from the same water reservoir used by the engine’s radiators, flows through an otherwise separate circuit to heat exchangers in each of the Boxster’s hip intakes. The slashes in the bodywork are 0.4-inch wider than before, both to allow more air into the engine bay for cooling as well as to make room for both the engine’s intake and the left-hand intercooler radiator in the left-side opening behind the driver. The 2.0L engine’s BorgWarner turbo is slightly smaller than the one on the Boxster S’s 2.5L, but it can pressurize the intake charge to 19.0 psi. The 2.5L’s turbo can only muster 16.0 psi, but it utilizes variable turbine geometry (VTG) borrowed from the 911 Turbo and Turbo S’s turbocharged flat-six engine to help boost engine response at low revs without sacrificing top-end power. Mechanical vanes placed at the turbo’s turbine inlet can angle closed like window blinds, the narrower flow paths accelerating the slower-moving exhaust gases produced at low engine rpm. At higher engine speeds, the vanes open so as to not impede (the now faster-moving) exhaust flow. It’s like having a smaller turbo at low engine speeds (one that spools up quickly), and a larger one (that produces more power) at higher engine speeds.

Why not use twin turbochargers for the flat fours, as Porsche does to the flat six? Assigning a turbo to each cylinder bank would add weight and cost and be less effective than a single turbo, as the four’s firing order (front-to-back on the left cylinder bank, then front-to-back on the right cylinder bank) would leave uneven gaps in the exhaust pulses each turbo relies on to increase manifold pressure. Each turbo would receive two exhaust pulses during every other 360 degrees of engine revolution; the single turbocharger, on the other hand, receives even exhaust pulses, once every 180 degrees of engine revolution.

To maintain responsiveness even when the driver lifts off the gas, Porsche briefly leaves the throttle open while retarding the timing, cutting fuel, and shutting the wastegate, essentially pumping air through to the turbo to keep it spinning; get back on the gas quickly, and the turbo’s already in play—no waiting for it to spool up. In the “Sport” drive mode (the middle option on cars with the Sport Chrono package), the programming is less aggressive in cutting fuel, allowing for “emotional” exhaust pops and burbles on overrun. In Sport Plus mode, the programming prioritizes airflow to the turbo, leaving the exhaust relatively subdued on overrun. 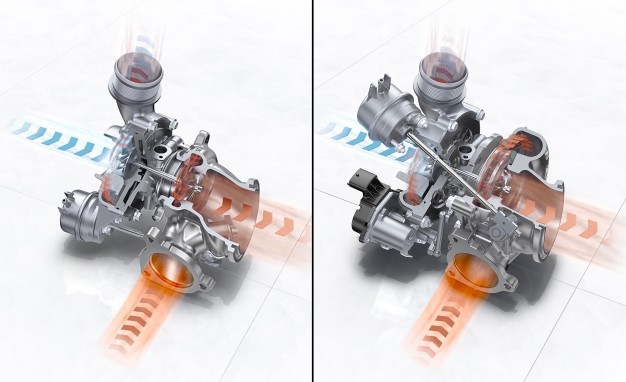 Speaking of exhaust, the 718 Boxster and 718 Boxster S, in standard guises, use similar exhaust layouts, albeit with a single outlet on the base car and two outlets on the S. A dual-mode sports exhaust with electronically actuated baffles is optional on both. No matter the exhaust fitted, the piping splits after the catalytic converter, routes around the transmission and over the rear suspension, through left- and right-hand mufflers, and into a shared outlet. Porsche also fits a resonance tube between the two mufflers, which combined with the unequal-length left- and right-hand exhaust plumbing, could be the key to the 718’s distinctly non-crappy exhaust sound. The noise certainly isn’t a flat-six’s song, but it’s a compelling and surprisingly mechanical melody for something many worried would be muffled by a turbo.

The exhaust also negates the 3.0-liter turbo six’s plastic oil sump. With the Boxster’s mid-engine layout, combined with the turbo’s forward location, the exhaust plumbing passes nearly all the way around the oil pan; the headers exit down and collect along the left side of the pan before flowing through the turbo at the engine’s front and immediately into the catalytic converter, then around the right side of the pan before splitting to the left- and right-hand-side mufflers. This makes for a very hot engine bottom, which would melt the 911’s plastic oil sump, so here it’s rendered in aluminum. Porsche refers to the sump as an “integrated dry sump,” but it is essentially a wet-sump design, as gravity still draws oil to the pickup point; even engine oiling isn’t an issue on the stock tires, but one engineer suggested an external oil collector—and a pump, like on a dry sump engine—might be a good idea were someone to run the Boxster on slick tires.

Pleasantly, Porsche was able to keep the new turbo flat-fours’ weights in check. The 2017 718 Boxster’s overall weight is up by around 11 pounds, thanks to additional standard equipment, bigger front brakes, an extra structural brace, and wider rear wheels, but none of the extra poundage comes from the engine bay. The 718 Boxster’s 2.0L—including its turbo, intercooler, radiators, etc.—is 18 pounds lighter than the outgoing Boxster’s 2.7-liter flat six; the 2.5L is seven pounds lighter than the 2.7. 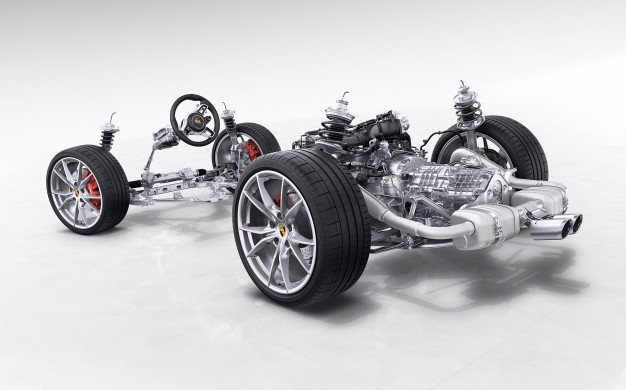 Thanks to the lightweight valvetrain technologies culled from the 911’s flat-six, the Boxsters’ flat-fours both rev to 7500 rpm, a fairly high speed for a turbocharged engine and just 300 rpm shy of the naturally aspirated flat-sixes they replace. Torque is greatly enhanced at lower engine speeds, the 2.0L peaking at 280 lb-ft and the 2.5L at 309 lb-ft; the 2.0L’s torque peak starts at 1950 rpm and the 2.5’s 50 rpm sooner, and both flat-line all the way to 4500 rpm before gently tapering off. The outgoing 2.7- and 3.4-liter flat-sixes’ torque peaks are weaker by 73 and 43 lb-ft and hit at 4400 rpm and 4500 rpm. The flat-fours’ horsepower curves are nearly linear, peaking at 6500 rpm in both engines. The 2.0L four makes 300 horsepower and the 2.5L is 50-hp greater; those figures are 35 ponies stronger than the old sixes. Porsche claims that despite the engines’ power, they should to consume 13 percent less fuel than their six-cylinder predecessors.

Of far greater import is how the flat-fours move the 718 Boxster (and, soon, the 718 Cayman) around. The engines zing where other turbo fours huff, and the high redline and well-tuned exhaust (not to mention the intake just behind the driver’s left shoulder) contribute to a suitably thrilling vibe. Porsche says the four-cylinder 718s are notably quicker than their six-cylinder predecessors to 60 mph, but oft-overplayed Nürburgring times paint a starker picture of improvement. A 2017 718 Boxster S with the PDK dual-clutch automatic transmission, Sport Chrono package, (0.4-inch lower) PASM adaptive suspension, and its 2.5-liter engine circled the Nordschleife in 7 minutes, 42 seconds—an absurd 16 seconds quicker than an identically equipped 2016 Boxster S, five seconds quicker than the six-cylinder Boxster Spyder, and just two seconds shy of the track-focused Cayman GT4.