In an industry that lives and dies by the sales of Camrys and pickup trucks, advocating for enthusiasts sometimes feels like standing in a raging river and shouting at it to reverse course. Manu­al transmissions are slipping toward oblivion. Fuel-economy regulations are driving diversity from manufacturers’ engine port­folios, replacing it with efficient homogeneity. And perhaps most worrying is the proliferation of crossovers. They’re like an algal bloom threatening to choke out all other life-forms in the interest of easy ingress and a commanding driver’s position.

But a few shafts of light have started to pierce the heavy blanket of crossover conformity. Porsche’s first glimmer of hope, the Cayenne, dates to before most people realized the market potential of a high-performance crossover. In its first year on the market, the Cayenne became Porsche’s best-selling model. The creators of the Pink Pig learned lessons from their new 5000-pound supersow, and the smaller, Audi Q5–based Macan has already dethroned the Cayenne as the brand’s sales leader. The example tested here is the new-for-2017 GTS, which splits the difference between the $55,450, 340-hp S model and the $77,050, 400-horse Turbo. 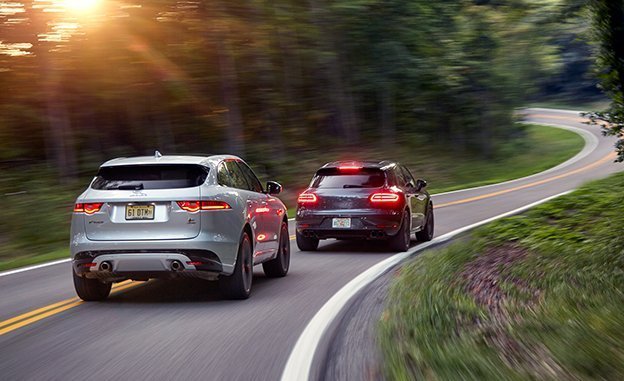 Revised ECU tuning boosts the Macan GTS’s output over the S’s to 360 horsepower and 369 pound-feet, while standard adjustable air springs lower ride height by 0.4 inch. Like other Macans, the GTS is only available as an all-wheel-driver with a seven-speed PDK dual-clutch transmission. This example’s $68,250 base price swelled to an as-tested sticker of $77,255. Notable extras include the Premium ­Package Plus ($3390; panoramic sunroof, heated seats front and rear, keyless entry and starting, and auto-dimming mirrors), brake-based torque vectoring ($1490), the Sport Chrono package ($1290; dash-mounted stopwatch, launch control, and sport-plus mode for harder-edged suspension and drivetrain responses), and a key painted to match the car (cost to you: $525; cost to Porsche: maybe a buck). Any color other than simple black or white also costs extra, and our Volcano Grey Metallic lists for $690. The Carmine Red on our cover Macan? $3120.

Jaguar’s beacon of hope is new for 2017. Never mind that Land Rover functions as the SUV arm of jointly owned Jaguar Land Rover; to get Americans to pay attention, every brand needs its own crossover. Jaguar plows a lot of aluminum into the F-Pace, using the lightweight stuff for most of the body structure and suspension components. A diesel four-cylinder is the base engine, but the likely volume engines are a pair of aluminum V-6s shared with the F-type. 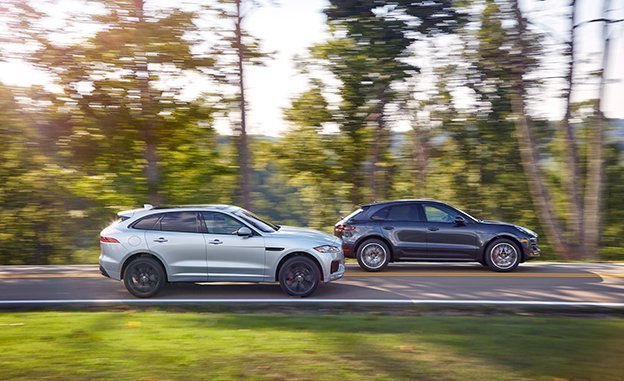 Displacing 3.0 liters and pumped full of 13.8 pounds of boost by an honest-to-John-Force Roots-type supercharger, Jag’s V-6 posts a 20-hp advantage over the Porsche’s, peaking at 380 in the S trim tested here. ZF’s ubiquitous eight-speed automatic sends torque to all four wheels, as it does in every F-Pace that Jaguar plans to bring to the U.S. Our example is one of 275 First Edition F-Paces, loaded up with 22-inch Pirelli P Zeros, an 825-watt Meridian stereo pounding through 17 speakers, Jaguar’s new In­Control Touch Pro 10.2-inch infotainment interface, and more. Total retail price: $71,095.

Aired up and topped off, we charted a course for Caldwell, Ohio, tucked into the state’s southeast corner near the Ohio River and the West Virginia state line. Here, where the roads swell and pitch across the Allegheny Plateau, we began to see the F-Pace and Macan as more than just a pair of new vehicles. Maybe crossovers like these, squatting lower, with roof- and beltlines creeping back toward the ground, portend a gradual shift away from wannabe off-roaders and back toward the lower-center-of-gravity car architectures on which the crossover boom was born. Or maybe they’re just flukes. Even if that is the case, they’re delightful flukes.