Whenever a significant revision to the Porsche 911 comes along, there’s a worry that everything we loved about Zuffenhausen’s classic GT could be lost. Perhaps the only generations to be regarded as a wholesale improvement over their predecessors were the 993- and 997-generation cars. Sandwiched between them was the unloved 996, with its fried-egg headlamps, downgraded interior materials, and an engine that developed a reputation for lunching itself courtesy of subpar bearings supporting a shaft that turned its overhead camshafts. But every generation has its supporters and detractors. Some have even been known to find fault with the allegedly unimpeachable 993, the ultimate air-cooled 911.

Ever since Porsche launched the 911 at the Frankfurt auto show in 1963, the naturally aspirated flat-six engine has been a defining characteristic. And although turbochargers first saw street duty on the 911 in 1975, they were always reserved for upmarket models: the Turbo, the Turbo S, and the GT2. Now, with the exception of the high-winding GT3 siblings and the very limited 911 R, every 911 off the line is fitted with a pair of snails as a matter of course. 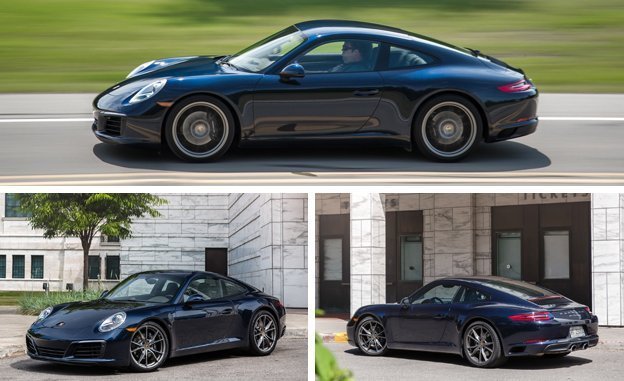 Turbochargers, of course, raise power output. Combined with reduced displacement, they also help automakers achieve fuel-economy targets. These new turbocharged Carreras conceivably could have fallen victim to regulatory realities, trading character for mpg figures. We are both relieved and pleased to inform you that, aside from a couple of peculiarities, this is not the case. Porsche continues to get ever more aggressive with its engine stop/start programming and now actually switches off the engine when the car is still rolling to a stop. Another recent addition is the dual-clutch automatic (PDK) transmission’s coasting function, which returns the engine to idle just about any time the driver lifts off the throttle, and—here’s the mildly annoying part—causes a lurch as the engine speed climbs back to the level determined by the re-engaged gear ratio. But switching into Sport or Sport Plus mode quickly suppresses these new efficiency-minded features. Play the stereo at moderate volume, and any hint of turbo noise vanishes. Even with the audio system off, the whoosh and hiss are mere undertones in the great ripping chords meted out by the Carrera’s 3.0-liter boxer engine. And the punchy, whopping gobs of torque the new forced-induction system lends the 911 are abundantly clear.

According to Porsche, output is up over the previous car by 20 horsepower and 44 lb-ft of torque. What’s more relevant is what the Carrera does with that newfound thrust. It’s a full second quicker to 60 mph than the last base Carrera we tested. Admittedly, that car was fitted with a manual transmission, while our 2017 model features Porsche’s silly-quick seven-speed dual-clutch automatic (which Porsche calls PDK), complete with a launch control function as part of the Sport Chrono option package. 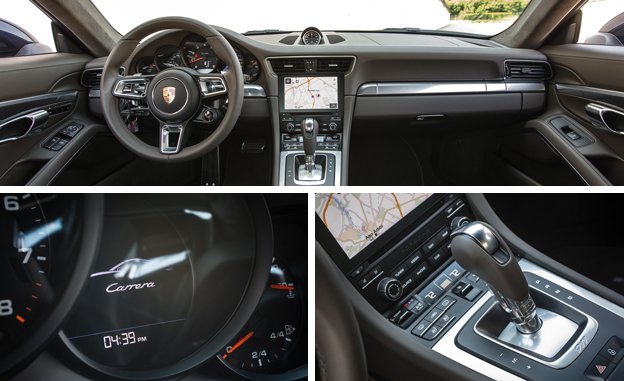 On the skidpad, the new rear-drive Carrera pulled a serious 1.06 g, a number that bests the all-wheel-drive 2015 Nissan GT-R NISMO. The 2012 base Carrera we tested managed only 0.98 g—impressive to be sure, but some ways down the ladder. Our 2017 Carrera was not fitted with Porsche’s optional Power Steering Plus, which led to a firmer, sportier feel at low speeds. Porsche claims that at higher velocities, the steering is the same regardless, but there’s something about the heavier steering at parking-lot speeds that adds an appropriate air of gravitas to the car. Do yourself a favor and save $270. Hotly debated in our ranks is the necessity of Porsche’s optional sport exhaust. Some find it obnoxious and overpriced. Others think it shouldn’t be optional, and its $2950 price tag should be simply rolled into the cost of the vehicle.

Inside, the updated 911 hasn’t changed dramatically, and although Porsche’s new PCM infotainment system is faster and more intuitive to use, we’re a little nostalgic for the yellow-on-black typography of the previous-generation PCM. The biggest change inside, frankly, is the movement of vehicle-mode selection to a rotary knob on the steering wheel on cars equipped with the Sport Chrono package. Cycling up to Sport Plus now no longer requires fumbling with console-mounted buttons. In all other respects, the 911’s cabin is just as fine a place to spend time as it was previously. 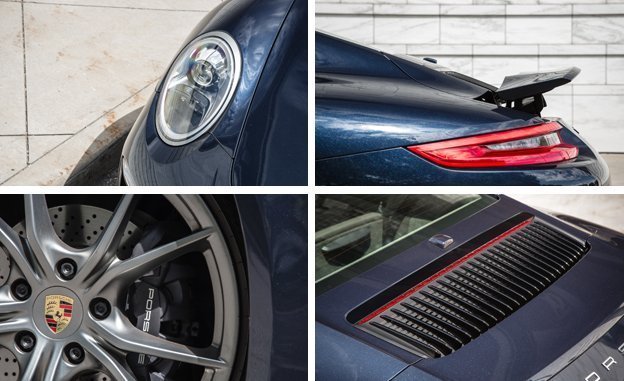 Since the introduction of the Boxster—and especially since the Cayman appeared a decade ago—the base Carrera has been something of a why-bother car. If you were shopping for a 911, the Carrera S was the obvious choice. If you just wanted something with a flat-six, the Boxster and Cayman offered as much elemental Porsche goodness as the pricier Carrera. But now that the mid-engined siblings have gone to turbo four-cylinder power, the Carrera is the cheapest way to get Porsche’s classic engine configuration into your driveway. That said, it ain’t exactly a pittance. Our reasonably optioned test car rang the bell at $110,970, and the $90,395 base price is roughly equal to what a Carrera S retailed for when the 991 series launched for 2012.

Those who complain that everything was better when the 911 lacked a radiator won’t be swayed by the 991.2. But we’d be hard pressed to argue that this latest 911 isn’t just the best water-cooled car ever to wear the Carrera badge, it’s a helluva performance machine in its own right. Frankly, it’s all the 911 most folks will ever need.