To be sure we have your preferred e-mail address, please click HERE  and update your data to be added to our e-mail distribution list.

Before San Diego Region became a Region, a few National Porsche Club members and enthusiasts got together here in San Diego and had some impromptu events. The year was 1957. Later that same year they were to get together and decide to join the Porsche Club of America as a Region. The first meeting was put together by Paul Madigan at the Golden Lion restaurant with ten members.

The following information was acquired from Bea Cole, Jim Douthit and Jack Case. This is how it happened.

The first letter is dated November 14, 1957 addressed to Bill Sholar (the creator of the PCA) in Alexandria, Virginia. It was from Paul Madigan here in San Diego.

Our activities to date include two dinner meetings, three runs (two to Mexico and one to Mt. Palomar), and two trips to the races at Palm Springs and Riverside, California.

The temporary officers are John Bowman President, Wally Schmidt Secretary and William Zongker Activities Chairman. If chrtered, we agree individually and as a region to abide by the Bylaws and Policies of the Porsche Club of America.

The name of the region will be “Porsche Club of America, San Diego Region.” The Region will include the county of San Diego in the state of California.

It is understood that within sixty days from the date of this letter we will submit our slate of officers and a copy of our Constitution and Bylaws.

Ten members in good standing in San Diego County are:

These are the original charter members of San Diego Region.

The second letter is dated January 21, 1958 addressed to John Case (Jack as we know him was a National Vice-President here on the West Coast living in Los Angeles). From Max Bunnel, President, National PCA.

At the moment, Bill Sholar has the San Diego petition which he assured me is proper, and I have reviewed and find all information in proper form.

In as much as the Executive Committee must pass approval for new charters, I would appreciate your comments if not in favor of granting these charters. In other words, to expedite their being published in Panorama…

And the third letter dated February 25, 1958 was addressed back to Paul Madigan in San Diego from Bill Sholar and cc-ed to John Case.

The petition for charter you forwarded to Bill Sholar has been presented to the Executive Council for their consideration and it is with considerable pleasure that I advise you the charter for San Diego Region of the P.C.A. has been approved. I want to wish you the best of luck in your future programs and activities.

In as much as the petition itself is not in my possession, could you advise me the boundaries of your region. Does it include Los Angeles? Would also appreciate your comments as to why or why not you have made the boundaries as they are.

By copy of this letter to John Case, I want to thank John for his contacts with you in the past. I am sure that John will do everything he can to help you with your planning or with regards to the P.C.A. from a national standpoint.

If I can do anything to assist you, do not hesitate to let me know.

As you can see, John Bowman was President on December 26, 1957, on the date and year our Region was Chartered. Paul Madigan then became President the following year for the first full year we were chartered as a Region to the Porsche Club of America. At that time we had no “Windblown Witness” or newsletter, events were publicized by word of mouth or by post cards.

The “Windblown Witness” would not be started until 1961. The name of the region newsletter came from the fact that the cars were air cooled, “Windblown” and “Witness” referred to getting information out to the members. The first issues were typed, two to three pages, and were run off as copies. Most of the information was about events or tech information, since we had no advertisers in the Windblown Witness at that time. This was a time of change in the club. The members could communicate via a newsletter rather than by phone.

First a little about Bill Myrick 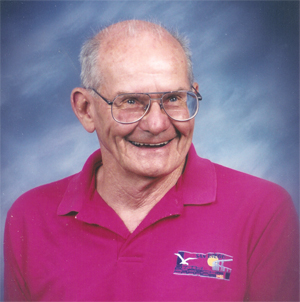 Bill Myrick worked for McDonnell-Douglas and was sent to Vietnam in support of the company’s military aircraft in use during the war years. It was while Bill was stationed there that he began his love affair with Porsche cars. He had always wanted to own a sports car. But he wanted a sports car with 4 seats so he could go on double dates with his soon to be teenage daughter, Terrie. The Porsche 911 was the one sports car that met his requirement of 4 seats.

During the 5 years he was in Vietnam he received combat pay which he put into a special car fund. In 1970, while still stationed in Vietnam, he ordered his Porsche 911 and paid $6,400 for it. When asked what was so special about the Porsche that attracted him to that particular car, he answered, “It was the ability to maneuver.”

Upon returning from Vietnam, Bill and his wife traveled from the West Coast to Florida to visit his mom, then up to New York where he picked up his 911 from the docks. He was worried about breaking his new car in on the long trip back across the US. He drove very cautiously at first but about mid-way in the trip home he read in the owner’s manual that he could take it up to 4,000 RPM (about 70 to 80 miles per hour), it was then that he (as he said it) “put the hammer down.” He stopped long enough in Iowa to replace the oil and transmission fluid.

Bill never sold that 911, though he had to put his car in storage while he was the base manager at Clark Air Force base in the Philippines from 1972 to 1980, much to his displeasure. Upon his return to San Diego he was on the road again.

In April of 1980 Bill joined the Porsche Club of America, San Diego Region where he remained active until his passing. He served as President, Vice-president, Treasurer, Board Member and driving instructor as well as working on many different committees.

One quality about Bill that was extra special was his ability to get along with people. He loved people and had friends all over the world. Bill was the type of person who would literally do anything for his friends. He was always there to help. He was the kind of friend everyone needs.

This quality in Bill was exemplified in his infectious enthusiasm for the Porsche Club and its members. Bill welcomed and befriended new members and was always there to lend a helping hand. If it needed to be done, you could count on Bill to get it done. In memoriam after his death in late 1999, the Enthusiast of the Year award was named in his honor so that this special man and his never ending contributions to PCASDR would never be forgotten.

Bill Myrick Enthusiast of the Year

Pat Scanlan joined PCA in 1968 and “Concoursing” became his passion. He restored and competed in Zone 8 and Parade Concours with no less than 7 different cars winning award after award, many overall. However, what made Pat different was that he would spend his time at a Concours helping others, even competitors that were in his class (prior to judging!). In addition to being a Board member, he was the Concours Chair for San Diego Region numerous times. He also hosted numerous Concours schools over the years to teach people about the sport. There is no denying that he was one of the region’s most enthusiastic Concours Participants. Over the years Pat owned a 356 (which he picked up new in Europe), a 1968 911L, a 914, a 356 Speedster, a 964, a 911 Speedster and lastly a 996.

Long time member John Straub recalls that some of the best times he had with Pat where when the two of them spent two years on the Alan Johnson Racing Team, traveling to races up and down the west coast and to Atlanta for the finals. “Pat was always there with his creativity and ingenious way of fabricating what they needed to win. Without Pat I’m sure our team would not have been the family that it was.” Alan Johnson states that “he was never late, he worked non-stop, had some good ideas for reconfiguring the front end of the 944 for better cooling of the front brakes and the car always looked like it was ready for a car show. And everybody loved having him on the team.”

His love for PCA and the San Diego Region carried through his life. When he passed away in 2007 he left $5,000 from his estate to PCASDR to be used for promoting events such as Concours. The Region dedicated the perpetual “Pat Scanlan Award” to be given to the San Diego Region member with the highest overall score in the Full Concours division at the annual region Concours to help promote and encourage Concours activities.

Pat’s note to the Club that was included with his will:

PCASDR has been a source of fond memories and experiences for many years. As a token of my appreciation I wish to present PCASDR with this check to be used for the Club’s activities. For my good friends still belonging to the group may I bid them a fond farewell and to the newer members may I wish you the good times and the lovely purr of those Porsche Engines.

National Family of the Year award