Where does Porsche’s seminal Turbo go now that most of the 911 lineup is turbocharged? It’s a question we briefly contemplated in approaching the revised, 2017 911 Turbo. The answer is simple: The 911 Turbo does what it has always done—add more power to separate itself from the herd.

Fast Enough for Ya?

The 911 Turbo and the slightly more powerful Turbo S already were among the quickest cars we’ve tested in the sprint to 60 mph. For 2017, both versions of the Turbo get 20 more horsepower; the basic Turbo is up to 540, and the Turbo S now has 580. A temporary overboost mode adds 37 lb-ft of torque to the Turbo, for a total of 523 lb-ft; the Turbo S gets an identical overboost bump, to 553 lb-ft. We’ve already taken the Turbo S to the track, where it placed ahead of the Audi R8 V10 Plus and the McLaren 570S in a recent comparison test. In that test, the Turbo S reached 60 mph in 2.6 seconds and ran the quarter-mile in 10.6 seconds at 131 mph. Even with 40 fewer horses, the non-S Turbo doesn’t feel slower. (We previously drove the Turbo and Turbo S at South Africa’s Kyalami racetrack, but that experience left no time for road driving. Now, we have more extensive seat time in the Turbo on public roads in America.) 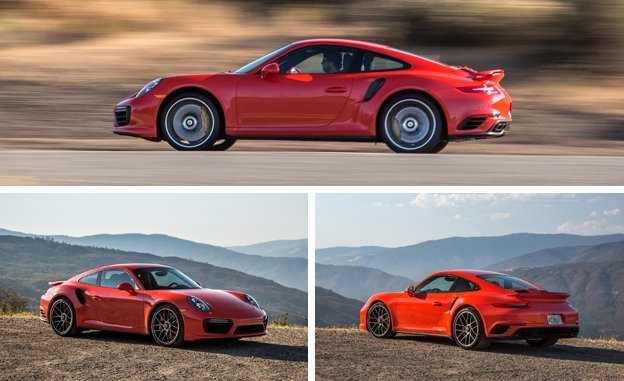 Porsche’s own test numbers place the Turbo a tenth of a second behind the Turbo S to 60 mph. That’s not a lot of difference, and the Turbo feels exactly like the Turbo S—no surprise, considering how deep the similarities run. A seven-speed dual-clutch automatic is the sole transmission in either car. As in the Turbo S, there’s a launch-control feature that revs the engine to 5400 rpm before engaging the odd gear’s clutch. The same standard all-wheel-drive system never misses a beat, and the Turbo tears away from a stop with familiar passenger-terrifying power. Under hard acceleration, the Turbo squats on its wide 305/30ZR-20 Pirelli P Zero rear tires, simultaneously lifting the front end slightly, and twitches pulse through the steering wheel as the front tires hunt for traction.

Porsche brought us to Thunderhill Raceway Park in Willows, California, to give us the opportunity to fully unleash both the Turbo and the Turbo S. With the exception of the greater fade resistance and more consistent pedal stroke from the S’s standard carbon-ceramic brakes (they’re optional on the base Turbo), not much of a difference could be detected between the two Turbos. The standard four-wheel steering helps stabilize the rear end and makes it easier to probe the limits of the chassis without much fear of the rear exploring uncharted territory off the tarmac. Left in Sport Plus mode, the transmission never gets a gear wrong. Under hard braking, it snaps down into the right gear and holds it until the engine kisses the 7000-rpm redline. Of course, it’s possible to select gears manually using the steering-wheel-mounted paddles or the console shifter (you now push for downshifts and pull for upshifts), but considering the speeds the Turbo can hit, letting it shift for itself means there’s one less thing for the driver to think about. 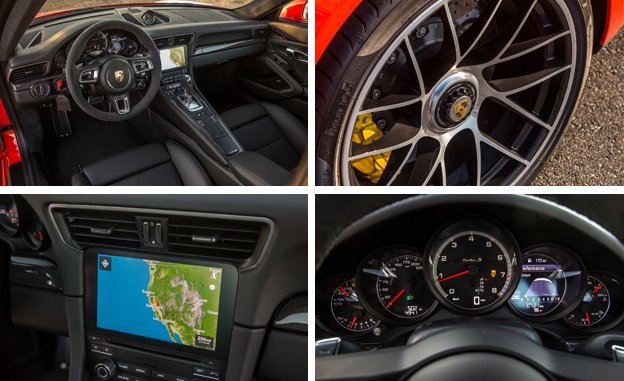 Away from the track, the Turbo boasts the same day-to-day usability as the comparison-test-winning Turbo S. The interior quality is excellent, and the seats are comfortable for hours. A new touchscreen infotainment system is more intuitive and quicker to respond than before. Entering a destination or point of interest into the navigation system is far easier than it has ever been in a Porsche. For iPhone users, Apple CarPlay is standard, but Android Auto is not available. Ride quality for such an extreme machine is good and never abusive, although tire noise, especially from the ultrawide rear tires, is intrusive at highway speeds.

There are few differences between the Turbo and the Turbo S. The Turbo gets its own specific turbochargers. Some features that are optional on the Turbo, including center-locking wheels ($3790), carbon-ceramic brakes ($9210), and dynamic anti-roll bars ($3160), are standard on the Turbo S. Start adding those extras to the Turbo’s $160,250 base price, and you’re well on your way to the $189,150 Turbo S.

Porsche tells us that about 80 percent of buyers happily spend the extra $28,900 to plunge into the Turbo S because, let’s face it, these folks can afford either car. If you have the means, buying a Turbo or a Turbo S isn’t exactly a rational decision, so why not go whole hog? We get it. But for those of us who can’t afford either and who start thinking about the cars we could buy with the savings, the Turbo is the sensible choice. Being sensible, though, probably isn’t in the top 10—or even top 1000—reasons why you buy a 911 Turbo. So, even though the Turbo doesn’t feel any different, it’s easy to see why someone would buy the S instead.