Source: Car and Driver
Full Article: Porsche 911 Rs Are Showing Up in All Sorts of Fun (and Funky) Color Combos 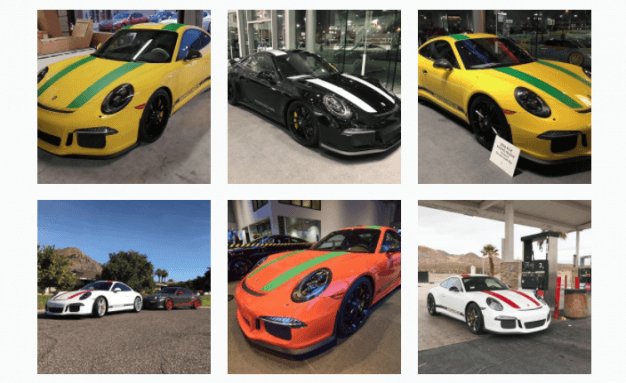 If you were to go to Porsche’s 911 R build site right now, you’d see there are only two colors from which to choose: White and GT Silver Metallic. There’s the option to add R-exclusive red or green stripes, but that’s about it. Pretty limited selection, right? That’s where Porsche’s Paint to Sample program comes in, which this owner took advantage of to make a Steve McQueen tribute 911.

It’s worth pointing out that unless you already own a 911 R, you’re out of luck—the car is sold out. But if you were one of the lucky buyers, chances are you’re familiar with the Paint to Sample (PTS) program. Basically, for an extra fee, Porsche will paint your brand-new car in any color you like, including those form a list of special paints that run from Lava Orange, like the car in the middle bottom slot above, to Meissen Blue are available.

Luckily for those of us on the outside looking in, Club911R on Instagram has been posting a bunch of various 911 R color combos from around the world. Scrolling through the account’s posts, you can see the variety, many of which include:

So if you’re worried you won’t be able to find a used example that’s not in white or silver, don’t stress, Paint-to-Sample’s got your back.