Behold the rarest of Porsche 911 Turbos. And by 911 Turbos, we mean only this current 991.2 generation. So, actually, we’re brewing up something of a statistical tempest in a teacup here, but try to follow along: The Porsche 911 Turbo cabriolet does not sell in big numbers, because this car with its $172,550 base price is too cheap for the majority of 911 Turbo cabrio buyers, who, we are informed by Porsche, generally spring for the 580-hp Turbo S (add $28,900) over this lowly 540-hp version. And, actually, the majority of all 911 Turbo buyers go for a coupe anyway. And when we say “the majority,” we really mean barely enough people to populate a decent curling tournament, as 911 Turbos are now up in the rare air where Bentleys and Aston Martins fly and thus do not sell in big numbers, period.

So the 911 Turbo cabrio, that rarest of blown Swabian butterflies, remains what it was before the 991.2 update came along to slap turbochargers on every 911 under the sun. That is to say it’s an even higher dosage of adrenaline in a car that is no longer the shock-boosted, pinwheeling handful it used to be, but rather an executive express designed to cross continents—or at least Palm Beach—as quickly and comfortably as possible. 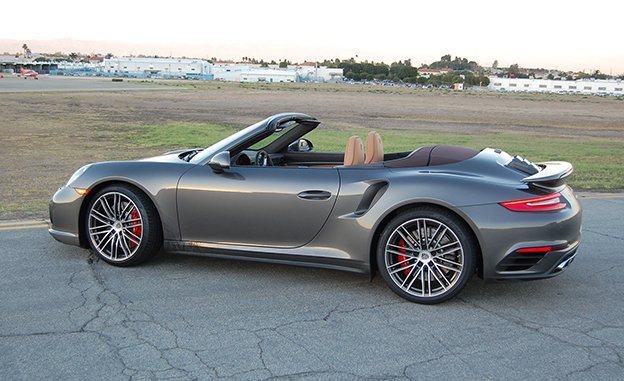 Of course, the Turbo convertible hasn’t grown either fat or lazy. Okay, at 3731 pounds, it is slightly chunky, but it is definitely not lazy. With all four of its giant tires churning the asphalt in a magnificently drama-free execution of computer-controlled fury, the Turbo cab sucks 60 mph up its snoot in 2.7 seconds. Two. Point. Seven. We’ve been waxing about sub-threes in Porsche Turbos for a while now, but Porsche’s dual-clutch automatic (PDK) with launch control really is a gobsmacking feat of engineering, especially on the 14th run when it’s still exactly 2.7 seconds and the car has barely broken a sweat.

You also get 1.03 g’s worth of cornering grip, which is a lot even in this day and age, and a stopping distance of an astonishing 138 feet, a benefit of the rear-heavy weight distribution due to the engine mounted in back. But the Turbo cabrio is so much more than its numbers. Beyond all the hype of being a Porsche and a 911 and a Turbo and a convertible, it is simply sublime on a twisty road. The human and machine gel so completely that you become convinced the only reason that our species came down from the trees was to drive 911s on twisty roads. 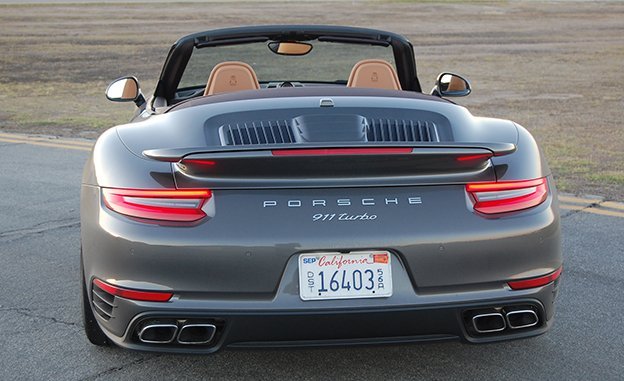 Sports cars aren’t known for suspension compliance, but the Turbo cabrio has it as long as you leave it in the default Normal mode. The chassis laps up road imperfections, and the body control is exquisite. Dial up Sport or Sport Plus with the little black ring protruding off the steering wheel and you’ll regret it. Sure, the engine gets barky and the seven-speed transaxle all but forgets about its top three ratios, but the ride gets brutal. Save those modes for the track; you don’t need them on a striped, public road.

It takes only 13 seconds for the cabrio to lower its canvas roof, after which the elegant interior is exposed to the elements. Our $181,905 test car had a modest (for Porsche) complement of options, including espresso/cognac two-tone leather ($1940) and leather upholstery for the backside shells of the seats ($1870). The buckets are firm and the cockpit is close fitting, but there’s not a speck of cheapness to be seen. All the finishes and touch points are uniformly beautiful and satisfying to the eyes as well as the fingers. 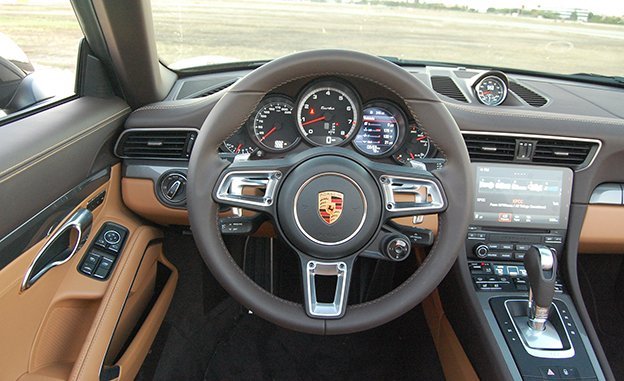 But Will Your Passenger Love It?

If there is a fault, it’s the way the brakes are nonlinear in daily driving. You apply light pressure to the pedal to, say, gently slow for a red light, and while you’re pressing, the pedal seems to suck your foot in, such that before you know it you’re pulling half-a-g deceleration. Strong brakes are nothing to complain about when you want strong brakes. But after just a couple of miles, the combination of the insistent brakes, the normal ride jitteriness you get from a short wheelbase tossed by broken pavement, and the augmented engine noise that adds a slight overbass to the cabin sounds caused two separate passengers to declare the onset of nausea. Our best advice: Try before you buy, especially with the spouse in the right seat.

Now that 911 Turbos easily reach $200K with options, they must have comforts befitting the somewhat conservative plutocracy that can afford them. Because yes, the 911 Turbo is the conservative if sportier choice compared with its competitors, being a familiar shape from a company with a peerless reputation for gonzo yet indestructible engineering. The dandies and the extroverts buy exotics; the people who want to get places in fast comfort but without becoming a picture on a million Instagram and Snapchat accounts buy Porsches.