The weather gods of Northern California cooperated by hurling rain at our Porsche 911 Carrera 4S during a 250-mile drive through the Mendocino National Forest up to the region of misty mountains and storm-lashed shoals known tantalizingly as the Lost Coast. What better challenge could you wish for when first encountering the latest all-wheel-drive Porsche 911 than to soak down the few undulating asphalt lanes that crisscross this wooded, moss-draped landscape? (This is a rhetorical question; don’t answer.)

As has been well documented here, Porsche is rebooting the base 911 Carrera and Targa line with turbocharged engines for 10 models (for now). We’re told that when this news was announced last year, it sparked a run on the former, naturally aspirated 911s. Granted, the new engine has a plastic intake and oil sump, so all that is good and right in the world seems to be ending. But plastic is lighter than aluminum, and its durability was proven by getting a factory forklift driver to repeatedly drop the fully assembled and dressed engine onto concrete from a height of about seven feet. Really—we saw video of it.

Having driven many versions of the new turbo car, including now this C4S, we think the fever to grab a free-breather before they were gone, while understandable, was misplaced. The 991.2-generation, as Porsche is calling the repowered version, is definitely better, more usable and flexible in a bunch of small ways, and lacks none of the spirit of the 991.1.

A new 3.0-liter flat-six fitted with intercooled snails does the motivating, and the base Carrera’s output of 370 horsepower rises to 420 in the S models, or 20 more than in the previous S versions, despite losing 0.8 liter of displacement. The 4S with the PDK automatic transmission like the one we drove sees EPA fuel-economy ratings increase from 19 mpg city and 26 mpg highway to 21/28 mpg. Which is a good thing for Porsche’s ability to meet regulatory standards, but it’s unlikely to matter to most customers who can afford a C4S. 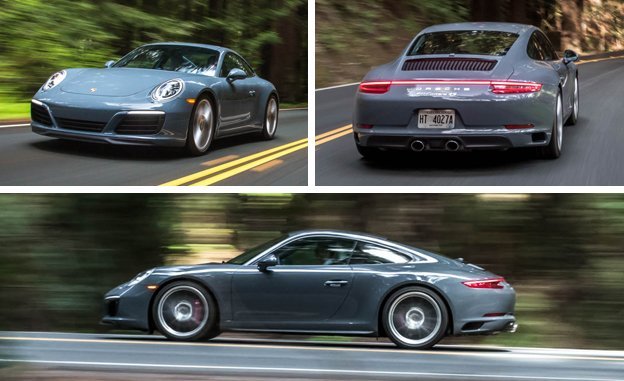 To go from Carrera to Carrera S costs $14,000, and from Carrera S to 4S costs another $6900. This car is not a cheap pleasure but a handsome reward for a life lived rather profitably. A life which Porsche itself is definitely living, to the great envy of other carmakers, with line items such as this S trim in which the extra coin buys, basically, a larger turbo compressor, some software, and a few interior and exterior goodies. If it costs Porsche more than a grand to install the S option, we’ll eat our free Porsche hats. The all-wheel-drive system, at least, involves significant hardware and engineering relative to the more modest price increase.

But that’s between Porsche and its buyers. Our $138,560 Carrera 4S in Graphite Blue Metallic ($710), with a leather interior in Graphite Blue and Chalk ($4280), included a $6810 Sport package with the new rear-axle steering system, a more vocal exhaust, and the smaller GT steering wheel. It also had the PDK dual-clutch automatic ($3200) in place of the standard seven-speed manual, the hella-big Premium Plus package ($3970), and the front-axle lift system ($2590) among the 12 line-item options on its window sticker. You see how it goes with the extras, and this example likely is representative of how a customer would order a Carrera 4S.

The maturing of the Carrera from ultimate 1960s compact sports machine into supreme luxury GT was already well underway before across-the-board turbos came along. But that said, the amazing thing about the 911 is how well it adapts to different roles, from the track-attacker GT3 RS (as yet, still non-turbo) to this Carrera 4S, which is about as luxurious as they come. The 4S is an all-weather torpedo for crossing borders and time zones in swift, sure-footed comfort. To Porsche’s credit, it has not sold its all-wheel-drive system as a performance upgrade but more as a capability enhancer. The engineers at Weissach are too honest to hide the fact that, unless the torque split is heavily rear biased, all-wheel drive—which increases curb weight—tends to heighten understeer at the limit. The sales pitch hasn’t changed except that, now, given launch control and the traction of all four wheels, Porsche modestly suggests that a 4S may be a tiny smidge quicker to 60 mph than an S. It quotes 4S acceleration figures ranging from 3.6 seconds for a PDK with launch control to 4.0 seconds for a manual. 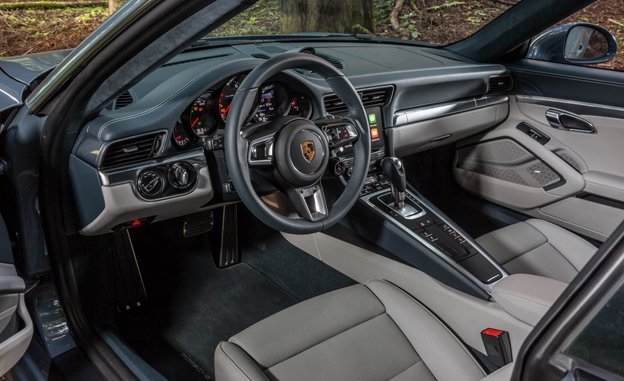 Figuring the rain had given the car a suitable challenge, we threw it hard into the first corner, only to have it slip sideways a foot on all four wheels. This was less instructive about its overall grip than about how Porsche has massaged the stability control with a new Sport mode that allows more driver freedom. At the same time, the damper-response envelope has been tweaked to make the ride less crusty in Sport and Sport Plus modes, which are now selected with a four-position dial on a pod emanating from the steering wheel. The extra cushioning in the suspension is welcome, even if the superwide tires, 245/35 in front and 305/30 out back, still generate a lot of white noise in the cabin.

Continuing on the rain-soaked road, we treated the puddles with a little more respect, but we still found the 4S clawed hard into the pavement. Even though the peak engine torque of 368 lb-ft (up 43 from the 991.1 S) starts dissipating above 5000 rpm, the needle goes all the way to 7500 before hitting red. “Just for fun,” an engineer told us. Well, it is fun to wind out the engine, the lovely steel-cut brrr of the flat-six out back coming through the firewall partly via a passive sound tube off the intake, but there’s not much to be gained by doing so. At 2000 rpm in a low gear and with your foot in it, the C4S is already approaching full steam. Being able to let it rev out to 7500 rpm does give the driver the option of delaying an upshift until the road, or the car’s attitude, straightens out.

Postponed reaction, though, is purely a matter of choice. Turbo lag has been engineered out so thoroughly that less-informed owners (these exist even among 911 buyers) may struggle to recall whether their cars have turbos or not. You can drop the windows and work the throttle to hear the faint but telltale heavy breathing, but otherwise the new Carrera is just a very nice car with a very nice engine. The sport exhaust brings in slightly more crackle, but there’s a certain robotic repeatability to the backfiring it does when you lift or downshift. Even knowing that the three perfect pops from the tailpipe are a bit of electromechanical theater staged by the car’s computer, it’s still fun to hear it.

Only the Carrera 4S cabriolet, perhaps, could be regarded as a less hard-core 911 than the Carrera 4S coupe, but having done wheel time in both, we can say that turbochargers have not dimmed the model’s incandescence one bit. Alternatives like the Mercedes-AMG GT and the Audi R8 may offer more power (for more money, it should be noted), but the 911 remains the sportiest and most unfiltered of the $100,000-plus luxury-coupe choices, and we suspect this will continue to be the case for as long as Porsche purists keep the, er, pressure on.